A Flames player makes a run on goal in Tuesday’s afternoon session at the Liberty Lacrosse Fields. (Photos by Ted Allen)

Fifteen members of Liberty University's men's lacrosse coaching staff and current and former players have helped refine the games of a wide range of 9-18-year-old boys through technical and tactical drills and scrimmages and competition at this week's Flames Future camp  at the Liberty Lacrosse Fields..

Sixty-one day campers — nearly three times as many as attended last summer's event that was drastically scaled back by COVID-19 — participated in the four-day event, which concludes Thursday afternoon with a skills challenge and game action.

"Coming out of COVID and after last year, it's a good sign and a testament to people just wanting to get back out there and go back to some semblance of normalcy," Flames Head Coach and Camp Director Kyle McQuillan said, noting that most are local players from Central Virginia, but a few came from as far away as Florida, Indianapolis, and Michigan. "We are looking forward to getting back in the dorms again next summer to give the players a full-immersion experience at an overnight camp."

Between the two-hour morning and late afternoon lacrosse sessions, the camp offers plenty of fun activities using a variety of Liberty's athletic and recreational facilities, including beach volleyball on the courts adjacent to the lacrosse fieldhouse and swimming at the LaHaye Aquatics Center.

"Kids don't necessarily get sent to camps to have fun, but if they can learn something at the same time, then everybody wins," McQuillan said.

He said the 90-plus-degree heat was not too much of a deterrent to keeping players focused and at full speed during drills.

"These kids are used to playing summer ball so they are acclimated to playing in the heat," McQuillan said. "Our athletic trainers are out here making sure they stay hydrated and spend enough time in the shade."

"I learn everything about lacrosse from my brothers," said T.J. Reynolds, a rising senior midfielder and attack at nearby Jefferson Forest High School. "Shane went to most of the camps for attack and midfield and basically is just passing down everything he knows to me."

His family moved down from Northern Virginia to nearby Forest when Ryan Reynolds, who also worked at the camp and is planning to return for a fifth season of eligibility, was a freshman four years ago. T.J. has made it to nearly all of Liberty's home games since then and this is his third year attending the Flames Future camp.

"I enjoy it a lot," he said. "Seeing familiar faces and just being here is a great experience. Right now, we're grinding on our stick skills and trying to get better and better."

"All of these guys have such a heart for the game and growing the game that they're able to help lead these kids at any age and it's awesome to see them spread their coaching wings and give back to the game as well," Glauser said. "(Bohannon and Shane Reynolds) both have some coaching experience on the side, so them being able to work with some of the younger guys and teach them the nuances of winning faceoffs is fantastic."

McQuillan said the wide range of ages and abilities among the campers forces the clinicians to be flexible in their instruction and feedback.

"You've got guys over here (in the 12-and-under group) that are doing things that are very different from what is being done over there (in the 18-and-under group) based on the skill sets and the level of experience," he said. "Even in the groups, within the 14-15-year-old group, you've got varying levels of experience, so trying to figure out ways to get everybody involved and accommodate everybody, but also give them some good tools and some good teaching (is the challenge)."

Glauser said players are evaluated on their strengths and weaknesses to give them personalized plans for improving their games in the offseason and leading up to the fall and spring travel and high school schedules.

"This is one of the best ways they can get on our radar aside from just sending film," Glauser said. "We can see where they're coming from a couple years out and start to look at a farm-team concept where we can keep track of them for longer and see them play and develop over the years."

The Flames will host a Flames Futures Elite Showcase from 4-9 p.m. on Aug. 21.

"There's a handful of guys coming in that we are very, very interested in for the next two recruiting classes," Glauser said. 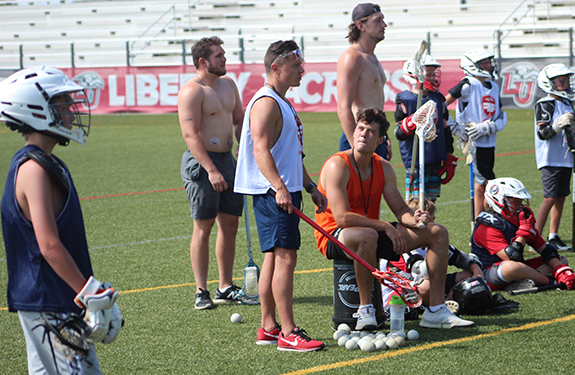