For the second straight round in the ACHA Division I National Championships, Liberty University's ACHA DI men's hockey team racked up five goals in the second period to break a tight game wide open, Sunday afternoon at the Maryville University Hockey Center.

Eight different players scored for the fourth-seeded Flames (13-4, 11-3 ACHA) in a 10-2 triumph over fifth-seeded Ohio University (6-16), putting them in the ACHA's version of the "Frozen Four" for the first time since their second season at the Division I level in 2008.

Liberty's 10-goal output set a new season high, one more than in its 9-1 blowout of the Bobcats on Feb. 27, which it matched in Friday's ACHA DI National Championships opener, a 9-0 rout of the tournament host Marauders.

"Hats off to our guys," Flames Head Coach Kirk Handy said. "We played well and did what we needed to do from the first shift of the game, and in the second period, we played extremely well. I was proud of our guys."

The Flames pounced on the Bobcats just 20 seconds after the opening faceoff when junior forward Josh Fricks picked up a loose puck near the red line and sent a short pass to freshman forward DJ Schwenke, whose shot from deep in the right circle was blocked by Ohio goalie Max Karlenzig but right to LU senior forward Ryan Cox in front, where he slammed the follow into the back of the net for a 1-0 Liberty lead.

"That's a great way to start the game," Handy said.

Moments after Karlenzig made a quick-reaction glove save of a Liberty shot off an odd-man rush, the Bobcats struck back to tie the contest at the 4:01 mark with a two-on-one counterattack with Andrew Sacca beating Flames junior goalie Hunter Virostek with an unassisted shot that glanced off his glove inside the right post.

But Liberty got the last laugh with 1:48 left in the period when senior forward Cole Gammer leveled an Ohio player with a body check near the red line to force a turnover. Gammer took the puck from sophomore defenseman Colin Baird before skating it into the Bobcats' zone and dropping a pass back to senior forward Quinn Ryan at the top of the left circle. Ryan took it from there, skating across the slot and deking past a Bobcats defenseman and Karlenzig for an easy finish in the right crease, lifting the Flames to a 2-1 lead going into the second period.

That's when Liberty, which went 7-1 against Ohio during the regular season, took complete control of the contest, scoring five unanswered goals to seize a commanding 7-1 advantage over the Bobcats.

The Flames showcased their speed on their third goal at the 18:04 mark of the second period, off a furious fast break sparked by sophomore forward Brett Gammer. He received a pass from Ryan out of the defensive zone and skated up the wing and through the left circle before wrapping a beautiful pass back to senior defenseman Chaydan Lauber trailing down the slot. Karlenzig blocked Lauber's shot but left the puck on the doorstep for junior forward Matt Bartel to clean up with a quick backhand inside the right post, stretching Liberty's lead to 3-1 with his first goal of the year.

"We let them back into it in the first period, but to go into the second period up 2-1 and be able to come out there and break it open, it was neat to see guys like Schwenke and Bartel, who had a hard time finding the net in the regular season, and they're finding it in the playoffs," Handy said. "We have a variety of guys scoring on all different lines and that's the exciting part for us."

Just 15 seconds later, Bartel cashed in again, receiving a puck dug out of the right corner by Brett Gammer and sophomore forward Devin Melice and lifting a wrist shot in the right circle over the glove of Karlenzig into the top right corner to put the Flames up, 4-1.

"I saw the momentum shift when Bartel scored those two goals within 15 seconds," Handy said. "He also came up big time on the (penalty kill)."

With just over 15 minutes to go in the second period, Fricks took the puck from Ryan near the blue line and skated through the left circle before beating Bobcats backup goalie Matt Server with a shot through the five hole, expanding the Flames' edge to 5-1 on their 15th shot of the game.

Schwenke netted Liberty's sixth score by following up his own two shots blocked by Server — the first from beside the Flames bench and second from the inside edge of left circle — and pocketing the third with a sharp-angled backhand from near the right endline to make it 6-1 with 7:32 left in the second.

With the Flames on a power play late in the second, freshman forward Jason Foltz hit a post with a shot in the left circle after a cross-crease feed from Ryan. Moments later, and seconds after the man advantage expired, Melice capitalized on a putback in the left crease of a shot from the high slot off the stick of senior defenseman Vitaliy Novytskyy, pushing the Flames' lead to 7-1 Flames just 49 seconds before the second intermission.

Then in the third, the Flames added three more goals, starting at the 17:47 mark when sophomore defenseman Tom Nagle launched a shot from the high slot and Schwenke swatted in another rebound, this time on a forehand inside the left post past the Bobcats' diving backup goalie Mason Koster for an 8-1 edge.

Ohio defenseman Blake Rossi crashed the cage and put away a putback past Virostek with 15:31 left in the third period, cutting the gap to 8-2. But the Flames tacked on two more goals in the final 2:22, the first a 180-foot empty-netter by senior forward and head captain Brock Thompson from near the faceoff dot in Liberty's right circle. Foltz capped the scoring at the 1:20 mark, finishing a three-on-one break with a wrist shot from the right crease into the top left corner of the net.

Liberty only outshot Ohio by a 33-30 margin, with Virostek making 28 saves.

The tournament was reseeded going into the Final Four, setting up an 8 p.m. Monday semifinal matchup between the Flames and No. 6-seeded defending ACHA DI national champion Minot State, a 2-1 winner over No. 3 Lindenwood. Top-seeded Adrian College, a 10-2 winner over Iowa State on Sunday night, will face No. 7 Indiana Tech at 4:30 p.m. EST. Both games, and Tuesday's 8 p.m. EST final, will be webcast live by the ACHA through its Hockey TV site. 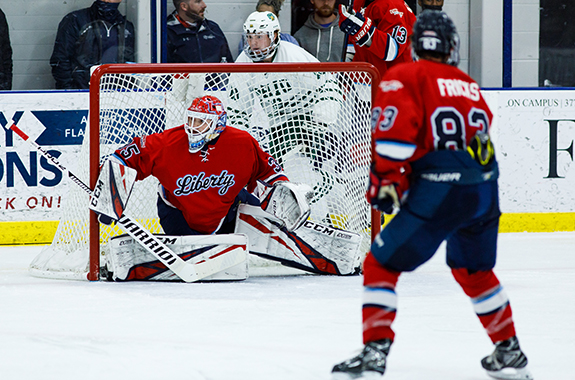 Junior goalie Hunter Virostek made 28 saves to keep the Bobcats at bay in Sunday's 10-2 triumph.