The first trip to the ACHA Division II National Championships since 2017 for Liberty University's fourth-ranked DII men's hockey team did not end well on Monday night against the top-seeded tournament host University of Mary in Bismarck, N.D.

After dethroning two-time-defending ACHA DII national champion Florida Gulf Coast University on Saturday night to finish 3-0 and win their pool, the Flames were knocked out by the Marauders, 7-0.

"It definitely wasn't quite the turnout we were hoping for," Liberty fourth-year Head Coach Ben Hughes said after the Flames had tied Mary to open their regular season at the LaHaye Ice Center and again on March 5 near St. Louis. "There are no excuses for how we played. It was not our night and they are really good and played a great game."

He said playing on Mary's home ice in a packed Starion Sports Complex was a definite factor in favor of the Marauders.

"Our guys were a little intimidated by the environment and were not emotionally mature enough to handle it," Hughes said.

Offensively, after Jaren Hugelen started the scoring at the 15:26 mark of the first period, fellow Marauders forward Andrew Huber netted a hat trick, scoring one goal in the first period, one in the second, and one in the third. Alexander Flicek extended Mary's lead to 4-0 with 7:46 left in the second period before Seth Cushing pushed the lead to 5-0 just over a minute later and Justin Ohnstad capped the scoring midway through the third.

"We weren't there defensively," Hughes said. "Normally, we are a very responsible team defensively, but we let up three or four breakaways in this game. Give credit to Mary, they move the puck very well and are very good at finding open man. They have a really smart group of players there."

Neither team capitalized on the power play as the Flames finished 0-for-5 with the man advantage and their penalty kill unit shut down the Marauders on all six of their opportunities.

"The big difference was we weren't able to penetrate the slot," Hughes said. "Everything we had was kept to the outside."

However, the opportunity to compete on that Final Four stage for the first time in four years made the trip to North Dakota worthwhile.

"It was so important for us just to finally get here again, with nationals being canceled last year and not getting the experience," Hughes said. "We are hungry to get back to nationals next year, when they will be in St. Louis (for all five ACHA men's and women's divisions). We are excited for it."

He said the lopsided loss was difficult to swallow and left a bitter taste in the mouths of the Flames, especially for senior forwards Blake Flanders (an ACHA DII First Team selection), Michael Niederer, and Caleb Toone, graduate forward Jerrell Campbell, and senior defensemen Aaron Partridge and Thomas Kazmierczak.

"It was pretty hard on them, but I can't say enough amazing things about those guys," Hughes said. "All those guys are such great guys and played such major roles as leaders on the team. They have to kind of pass on the torch and hopefully there are other guys in the locker room next year that can be leaders."

He felt the sting of graduating his first class of recruits that he inherited from longtime DII men's Head Coach Chris Lowes, now in his fourth season at the helm of the Lady Flames' DI women's team.

"It was a tough way to end the season, but I'm super proud of our guys and not only what they accomplished this year, but just who they are," Hughes said. "They're a breath of fresh air to deal with every day and I'm just grateful that I get to be their coach."

While he will also be losing Assistant Coach Matt Cruickshank, who is moving to Saratoga Springs, N.Y., to join the Hockey Hut Training Center staff, Hughes, who also serves as Club Sports Director of Recruitment, is already looking forward to finalizing the Flames' fall recruiting class during the May 20-21 Flames Prospect Camp. 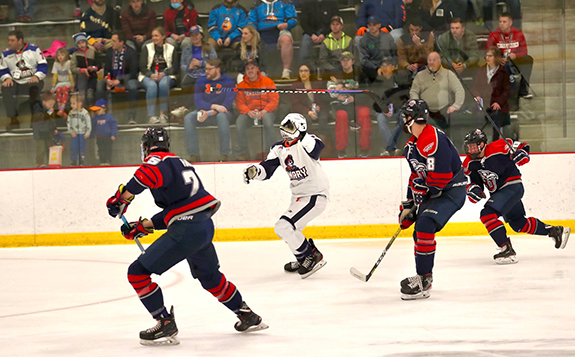