For 14 seniors on Liberty University's ACHA Division I men's hockey team this season, ascending to a program-high No. 2 national ranking and winning their third ESCHL regular-season and tournament championships in four years were magnificent milestones along their hockey journeys at Liberty.

Finishing 21-0 at the LaHaye Ice Center (LIC) and eclipsing the 30-win mark during the regular season were other firsts that they helped the Flames (33-4) accomplish. Before blanking seventh-ranked Stony Brook in the ESCHL Tournament final, March 8 in West Chester, Pa., Liberty staged back-to-back upsets of previously undefeated Adrian College on Feb. 21–22 at home, marking the first time the Flames had swept a series against a No. 1-ranked team.

"A lot of great memories," Liberty 20th-year Head Coach Kirk Handy said. "These guys were a spectacular team, just an all-around great group of guys who wanted to be a part of the mission of Liberty. It was a large senior class … an older group of guys that knew how to manage the ups and downs of the season with consistency, which is really important to get to where we (did)."

Despite enduring a season plagued by injuries to several top players, the Flames managed to rise above every obstacle in their path and overcome adversity, showcasing their tremendous depth and versatility, a strength of the senior class.

"We just kind of have the next-guy-up attitude," senior defenseman Chaydan Lauber said after Liberty's regular-season-ending series against Alabama, a 9-1, 9-1 sweep of the Crimson Tide on Feb. 28-29 at the LIC. "Everyone can play anywhere on our team. We're just working hard and honestly I think the injuries have brought us closer together because everyone's just battling for each other now and we're just doing whatever we can to get the job done."

Adrian maintained the No. 1 ranking after having swept the Flames on its home ice on Oct 25-26. Unfortunately, a potential national championship finals rematch between the top-two-ranked teams will never materialize as the ACHA, out of abundance of caution over the ongoing COVID-19 coronavirus pandemic, was forced to cancel the March 19-29 National Championships in Frisco, Texas.

Liberty was planning to send four of its five teams to that tournament, where the top-ranked ACHA Division I women's team would have been vying for a third consecutive national title and its fourth in six seasons. Its DII men's and women's teams had also qualified for their second trips to nationals in three years.

Though the coronavirus prevented the DI Flames from returning to Texas to challenge for their first national crown, they did experience a trip of a lifetime — to Helsinki, Finland, from Jan. 2-10.  Through the travels overseas, they bonded even more tightly as brothers in Christ, and that carried over onto the ice in the spring semester, when they finished 15-1.

"We've got a special group of guys to begin with, so when you put them in that environment and with the power of the Spirit at work, it's going to just knit us together even more," Liberty Associate Head Coach Jeff Boettger said. "Our guys are mature and they're really unified as team members. They know how to lift each other up and support each other as you go through the ups and downs of a season and pushing toward the playoffs."

"It is a fantastic group of guys," Handy added. "These are guys who are going to be lifelong friends." 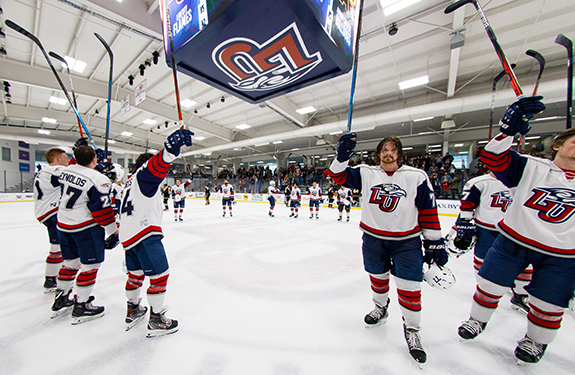 Players, including senior defenseman Chaydan Lauber (77), acknowledge the Flames' fans after completing a sweep of Adrian on Feb. 22 at the LaHaye Ice Center. (Photo by Jenna McKenney)