In the closest thing Liberty University's rock climbing team has had to a home competition since it debuted as a Club Sports team last fall, the Flames took the top five places in the men's individual standings and the Lady Flames put four climbers in the top six of the women's division, Saturday at Rise Up Climbing in Downtown Lynchburg.

"It went really well," Liberty Head Coach Elliot Gaunt said. "The team did great and I was very proud of them. We were really excited with how the team turned out and competed. It was good for our climbers to see where they are as far as competition and handling the challenges of the climbing routes."

Rise Up had a total of 50 bouldering problems set up, ranking from 1 being the easiest and 50 the most difficult. Climbers in the red-point competition were allotted three hours to try to complete the five best bouldering problems they could handle.

"A lot of our guys and girls were able to do climbs into the upper 40s, so almost the hardest they had to offer," Gaunt said. "They did a fantastic job of pacing themselves. Even though there wasn't a lot of competition from other schools, they did a good job pushing themselves to do the best that they possibly could."

The Flames and Lady Flames will next compete on Nov. 10 when Gaunt will take his travel team to the River Rock Beatdown bouldering competition in Roanoke, where Virginia Tech and Virginia were among the Capital Region teams represented last year. Meanwhile, Liberty's developmental climbers will enter the Golden Boulder Comp, the Fall semester's event at the LaHaye Recreation & Fitness Center's rock wall, open to all Liberty students. 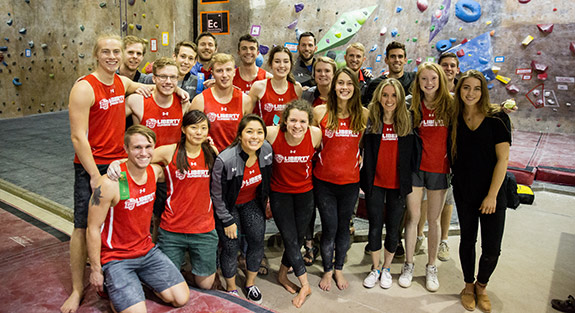 Members of Liberty's travel team competed at Rise Up on Saturday. (Photo by Andrew Snyder)