So when Boyd swept his way to the USCA Indoor National Championship late Friday night at the South Pointe Hotel Casino and Resort in Las Vegas to claim the 10th individual or team national title in the 10-year history of the Flames' program, it was an especially remarkable feat.

"For him to win it all was against the odds, being a rookie to this sport," Liberty first-year Head Coach Ian Rigney said. "He didn't show any signs of struggling. He just kept shooting 10s." 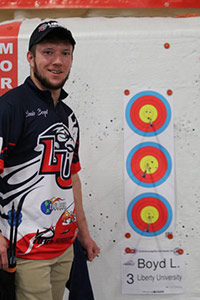 Boyd fired bullseyes on his first three arrows on the 20-yard range, opening a three-point lead on Shaw after the first of four sets of three arrows before holding on to win by that margin.

"He's going to be a force to be reckoned with in collegiate archery because this is only his first year and he's already got two titles under his belt," Rigney said, noting Boyd finished first out of a total of 58 shooters from 19 different colleges.

Rigney, who claimed three individual titles (3D compound in 2012 and 2013 and indoor bowhunting in 2015) and one team (3D compound in 2012) crown as a competitor for the Flames from 2011-15, has now coached two more in his first season at the helm. He guided Boyd and teammates Spencer Foster and Jason Lynch to a men's bowhunting team title at the USCA 3D National Championships, Oct. 8 in Illinois.

"Since 2008, when the program began, we rank among the top five winningest collegiate archery programs in the nation with these 10 national titles," Rigney said, noting that Cumberlands and Union College rank first and second, respectively.

In Friday's women's Olympic recurve event, Liberty freshman Katherine Agnew, seeded eighth, upset Shelby Winslow, the top-seeded archer from Missouri State, 6-4, in the quarterfinal round before falling to fourth-seeded McKenna Cooley from Mount Marty College, 7-1, and finishing fourth with a 6-0 setback against California-Irvine's Kirsten Cassidy. (In the women's events, two points were awarded to the winner of each of five sets of three arrows with one point added to both archers' totals after a tie).

"She didn't buckle under pressure by any means," Rigney said, noting Agnew had shot a regional score of 631 compared to Winslow's total of 1,107. "She showed up and everybody was congratulating her as much as Louis because she caused the biggest upset in the tournament."

At the competition, Rigney was able to watch a future member of the Lady Flames, Hala Skelton, a compound shooter who has committed to Liberty for the Fall semester after visiting College For A Weekend (CFAW) this past semester.

"She is a very good prospect," Rigney said. "She is a homeschooled student who travels all over the country, all over the world shooting for USA Archery. She is going to be a great asset to the team."

The USCA Indoor National Championships were just one of several competitions held over the weekend at the Vegas Shoot, the largest event in the nation with over 3,500 shooters, organized by the National Field Archery Association.

Boyd also competed in the bowhunting division of the Vegas Shoot and was in the top 25 percent of 200 amateur and professional archers after Saturday's first round, when he shot a 293 out of a possible 300. He finished 33rd in the nation.