Three unanswered goals in the third period lifted sixth-ranked Ohio to a dramatic comeback win over No. 8 Liberty University's ACHA Division I men's hockey team, Friday night at the LaHaye Ice Center. The 3-2 setback stretched the Flames drought against the Bobcats to 12 consecutive games.

"Both teams battled hard tonight," Liberty Head Coach Kirk Handy said. "Through 40 minutes, we liked what we were doing, but in the third period, we didn't have our best period and we needed to."

The Flames battled the Bobcats evenly throughout the first two periods, generating the majority of the quality scoring chances in the first period. Bobcats forward Kyle Craddick had an empty-net score called back after Flames goalie Josh Halpenny dislodged his cage while making a save as Gianni Evangelisti skated the puck in front.

Liberty started the second period on a power play, but Ohio — which has one of the best penalty kill units in the country — generated more scoring chances despite playing a man down.

"We definitely need to get better on the power play," Handy said after the Flames finished 0-for-4 with a man advantage.

Back in five-on-five action, the Flames struck first when sophomore forward Cole Gammer skated the puck wide of the right circle and sent a spectacular assist to junior defenseman Chaydan Lauber for a one-timed finish in the left crease at the 16:40 mark.

The teams traded penalty kills midway through the period, with the Flames manufacturing a shorthanded chance from junior defenseman Josh Bergen to junior forward Josh Hamilton whose shot was glove-saved high by Bobcats goalie Jimmy Thomas.

Junior forward Quinn Ryan padded Liberty's lead to 2-0 in the final 2:32 by skating the puck around two Bobcats from the left boards and lifting a sharp-angled wrist shot through traffic inside the right post.

But the Bobcats ended Halpenny's shutout hopes just over a minute after the third-period faceoff when Craddick gathered the rebound of forward Timmy Thurnau's shot from the point and snuck it past Halpenny from in the left crease, trimming the deficit to 2-1.

Sophomore forward Ryan Cox had his driving shot blocked by Thomas at the doorstep before Ohio netted the equalizer on the power play when defenseman Jacob Houston stuck in the putback of Gianni Evangelisti's shot from the slot with 9:31 to go.

Halpenny made a diving save of a point-blank shot by Bobcats forward Matthew Rudin three minutes later before a turnover in the Flames' defensive end set up Ohio's game-winner with 2:47 remaining in regulation. Evangelisti intercepted an outlet pass and launched a shot from the top of the left circle before defenseman Thomas Pokorney chipped the loose puck over Halpenny inside the left post.

"We needed to be better in that third period and that's something we want to make sure we can improve on," Handy said. "We'll make some tweaks and be ready to go."

Saturday's rematch, set for 7 p.m. back at the LaHaye Ice Center, will again be webcast live by LFSN and carried on ESPN+. 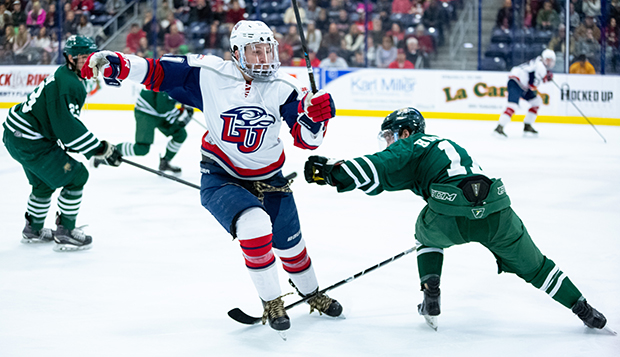