The upcoming athletic year at Liberty University will be a groundbreaking one for the Flames' ACHA Division I, II, and III men's and DI women's hockey teams, which will become the first Club Sports programs from any of the Big South Conference's 10 member schools to have live action streamed on the Big South Network (BSN).

"The Big South Network has a long history of expanding its reach in both sporting events and viewing audience, so we are happy to cross two new frontiers by adding Liberty's hockey games to the lineup," BSN's Director of Multimedia Development Mark Bryant said. "It will simultaneously mark the debut of ice hockey as a BSN sport and the first broadcasts of Club Sports on the network. Given Liberty's high level of production quality and the high volume of streamed games, we expect a notable impact on the Big South Network this fall."

An NCAA Division I athletic conference with schools in North Carolina, South Carolina, and Virginia, the Big South was founded in 1983 and began webcasting events on the BSN more than 10 years ago. Its programming received more than 500,000 unique views last year, averaging more than 500 per event.

"We have grown from a subscription-based product to a much larger free product available on any device with access to several hundred live sporting events from our member campuses," Bryant said. "We're always trying to improve our product and give our audience the best possible look into sports at Big South schools."

LFSN's track record for delivering professional webcasts of live sporting events was a selling point for the Big South Network to expand its range of collegiate coverage, venturing outside Big South Conference play to the American Collegiate Hockey Association (ACHA).

"I believe the Big South recognized the quality of our student productions, especially since they have been featured on WatchESPN," said Matthew Byrd, LFSN's streaming producer. "I'm thrilled that students of the School of Communication & Creative Arts have another avenue in which to display the skills they've learned in the classroom through the practical hands-on experience LFSN provides."

Byrd said the new viewing platform will benefit Liberty's student-athletes and Flames fans as well as his team of producers, broadcasters, and crew members, many of whom are students.

"We're excited for the ability of Liberty fans to access all LFSN broadcasts in one place on the Big South Network," he said. "This will bring added exposure to the hockey broadcasts and is a great reward for the efforts of the students who put in a lot of time and dedication to produce Liberty Hockey broadcasts."

"It's great visibility for our programs and will highlight the aspects of Liberty University that are unique, including having robust Athletics and Club Sports departments," he said. "Other Big South institutions will see the value of athletics to the university and how the Club Sports department is run here."

Handy said LFSN's high production quality will showcase the Flames' teams in a favorable light and help attract new fans to the program.

"Lynchburg, Va., is not necessarily a hockey hotbed, but we've been able to create a market here and having our games available to be viewed on the Big South Network will help grow that market," he said. 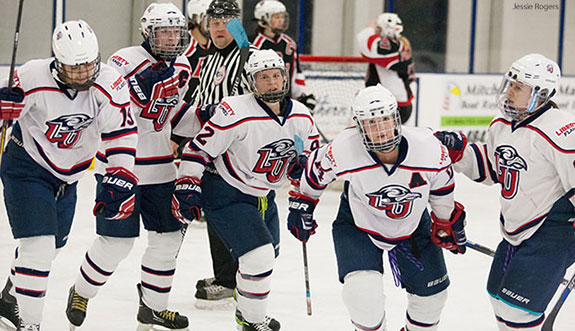 Liberty's DI women, which won the first ACHA title in club history in 2014, will get equal air time.