Connor Rothermel, shown practicing outdoors, won the men’s recurve division by firing rounds of 266 and 262 for a 528.

Liberty junior Connor Rothermel, who was named the USA Archery All-Around Men's Olympic Recurve Archer of the Year last season, won the men's recurve division by firing rounds of 266 and 262 for a total of 528, 66 points more than Samuel Schafft, the runner-up from JMU. That also placed Rothermel 31st out of 57 senior men's recurve competitors, and 13th among 25 collegiate men, nationally.

Lady Flames freshman Natasha Leininger finished third in the women's recurve with rounds of 241 and 234 for a total score of 475, which put her 34th out of 52 junior women's recurve competitors and 20th out of 34 collegiate women nation-wide.

Junior Isaac Underhill posted a round of 411 to win the men's barebow division by just three points over JMU's Michael Schumacher. That placed Underhill 44th out of 63 senior men's competitors and ninth out of 21 collegiate men nationally.

Liberty had two women in the top three and two men in the top five in the compound division. Sophomore Emma Suggs won the women's division with 566 points, 15 more than JMU's Carolina McCracken, while senior Nicole Dieterly placed third with 540. Suggs' total tied her for 27th out of 67 senior women and tied for 19th out of 42 collegiate women nationally.

Rothermel, Boyd, and Barkley will travel to Richmond, Va., for the May 20-23 USA Archery Target National Championships, making them eligible for USA Archery All-American consideration. 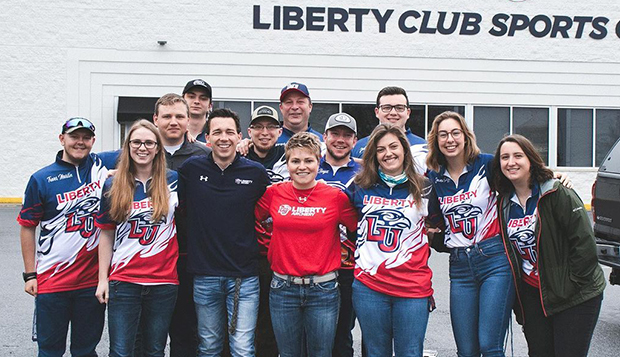