Former members of Liberty University's ski and snowboard team were rewarded for their skills on the slopes at Saturday's second "Air Dogs and Rail Hogs" competition at the Liberty Mountain Snowflex Centre (LMSC). Five of the six podium finishers and cash prize winners in the men's skiing and men's snowboarding Big Air and Rail Jam events were former Flames.

In the men's snowboarding Rail Jam, Liberty sophomore Milo Rice took the $750 top prize with Bryan Ducharme, who last competed for the Flames in 2015, earning $400 for second place, and senior Austin Santos, who rode for Liberty from 2015-17 and is completing his degree online, winning $150 for third. Ducharme, former Liberty competitor and first-year Head Coach Isaac Gibson, and former Flames Head Coach Will Scheren, now an associate director of online engagement, took the top three spots in the snowboarding Big Air competition.

Ari Moronne, a high-level snowboarder who trains out of Big Boulder (Pa.) Park, won the women's Rail Jam, followed by former Lady Flames rider Eden Jones, and Bethany Waller, a senior at nearby Heritage High School who helps Gibson run the local chapter of Skiers and Snowboarders for Christ (SFC).

Snowflex staff led the final session of April's Next Level Development Program earlier in the day, which attracted 23 snowboarders and skiers who later competed in the youth division of the competition.

"It was exciting to see the progression the youth have made because that's the future of the sport," LMSC General Manager Ryan Leeds said. "The youngest competitor was a 5-year-old skier and he absolutely killed it in both the Big Air competition and the Rail Jam."

Liberty will again host its day and overnight Next Level Summer Camps, run by Flames coaches and team members as well as SFC staff from chapters across the United States and Canada, from June 17-22 and June 24-29 (overnight camps) and July 9-13 (day camp). 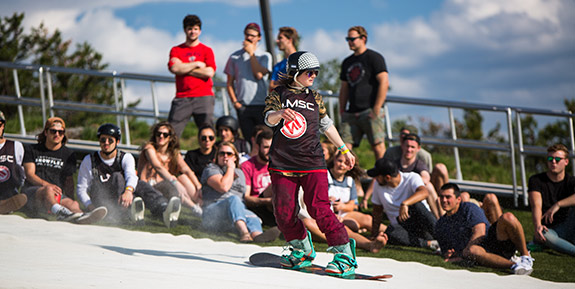