Student Opinion: What comes next after the catastrophic blue backlash 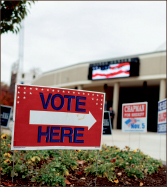 What was expected to be the political turn for Republicans has turned into a catastrophic blue backsplash. The midterm elections took place on Nov. 8 with some results coming in days after Election Day. Many winning Democratic candidates highlighted one of the nation’s most controversial topics in their campaigns: abortion.

Gov. Gretchen Whitmer of Michigan, who was just reelected in this midterm election, successfully took a different approach from her last campaign, highlighting her rights as a woman and her belief in the importance of abortion. Whitmer wasn’t the only one. After Roe v. Wade was overruled this year, Democratic candidates took hold of this pro-choice agenda with clenched fists and the determination to emphasize their support for this belief.

With Republicans hoping to overturn both the House and Senate and multiple polls indicating the likelihood of that outcome, the party now faces the reality that this change will simply not be happening.

Americans and pundits are stunned that only about 17 seats were flipped, a far cry from the projected 30, with Democrats picking up five seats with more races out West still to count. Democratic incumbent Sens. Catherine Cortez Masto of Nevada and Mark Kelly of Arizona both won reelection, confirming that Democrats will keep the Senate blue regardless of the results of the Georgia runoff.

Scott Bland from Politico says, “Republican hopes for a red wave did not come to pass. A handful of races – and, with them, control of the House – remain uncalled.”

In several states, results still have yet to be announced. While we have a good idea of the political layout, certain states are taking much longer to provide their results.

Regardless of the official tally, it is deeply saddening to think that President Joe Biden’s two years in office did not change the opinions of Americans in this midterm election. It has become clear we will remain under the Democratic umbrella of blunder, inaccuracy and fault for the next two years.

The hopes of a Republican takeover blocking some of the rash and unconstitutional agenda of the Biden administration have been dashed.  The GOP will hold little power over the foolish intentions of the current president.

As we eagerly await further results to determine the party with control over the House of Representatives, we must remember that we live in a nation under God and indivisible with liberty and justice. While voting is over, the time to pray is now. Put your hope in a power greater than your vote or any candidate.