Opinion: Anytime in November is Fair Game When Decorating for Christmas 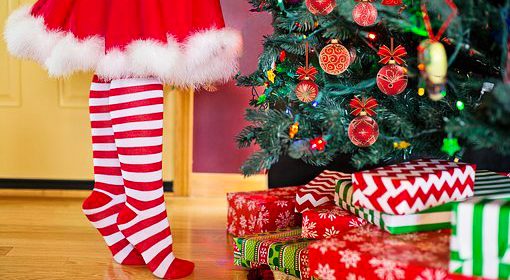 It is a chilly evening in late November. Snow dusts the ground outside, brushing the few remaining brightly colored leaves still clinging to the trees. Your warm home is a welcome oasis from the crisp outside air. Inside, family gathers to eat turkey and stuffing. The smell of mom’s pumpkin pie in the oven and the sound of laughter both infectiously fill the room. A Frank Sinatra Christmas record is the score for the evening.

It’s only Thanksgiving, but it is the most wonderful time of the year.

Yes, I know it seems that Christmas bleeds into the fall season more and more each year. I am not advocating for absurdity — decorating in October is certainly unreasonable. Heck, when I saw Christmas decorations on the Hobby Lobby shelves in September (albeit, they are notorious for early holiday preparation), I was taken aback.

But I do not find it offensive to decorate for Christmas after November 1. Yes John, I am a proud “Novembrist.”

Although the mere extension of holiday cheer is enough for me to justify decorating early, I do have a few logistical rationalizations for those on the fence.

1. According to experts, decorating early can make you happier

On Nov. 1, we lose a precious hour of daylight. The dark days combined with increasingly colder weather can make for a gloomy season.

The domestic goddess herself, Martha Stewart, published a piece on her website detailing how decorating for the holidays early can affect your mood and, subsequently, combat seasonal depression.

Psychoanalyst Steve McKeown told Martha Stewart Living that “Decorating your house early extends those magical childhood emotions from times gone by, which can only serve as a constant reminder causing positive psychological changes that affect your mood.”

Business Insider also recognized the science, also citing the fact that Christmas is a nostalgic experience for many, and transports people back to simpler childhood times.

“It may be a bittersweet feeling. Perhaps the holidays serve as a reminder of when a loved one was still alive. Or maybe looking at a Christmas tree reminds someone of what life was like when they still believed in Santa,” McKeown said. “Decorations are simply an anchor or pathway to those old childhood magical emotions of excitement. So, putting up those Christmas decorations early extends the excitement!”

According to Business Insider and Martha Stewart Living, people who decorate early are generally happier. So why not join the crew?

Growing up,my family got our tree and decorated the house in the first week of December. It was a whole production – we would go together to the tree farm, spend way too much time laughing, sipping hot chocolate and picking out the perfect tree to enhance our living room corner. Then we would bring it home for a cozy night trimming the tree and listening to old carols.

I am the oldest of three, so when I left for college the tradition continued, but I was left to experience one of my favorite nights of the year through a facetime call.

So, I started decorating here at school. But there is a time problem — with the semester ending around the second week in December, waiting until after Thanksgiving break to decorate leaves you with about a week and a half to enjoy the season at school.

My roommate grew up on a Christmas tree farm in Tennessee and brought one back after a trip home over the first weekend in November. We were fully decorated Nov. 4 and spent a month together in the Christmas spirit before wrapping it up with “Christmas morning” as a house at 9 p.m. on Dec. 5. Was it unconventional? Yes. But it was one of my favorite junior year memories, and the next day we all went our separate ways to spend the rest of the season with our families.

This semester, many students will not return after Thanksgiving because of COVID-19, so the only opportunity to enjoy the holiday season at college is in November.

At risk of sounding cliché, 2020 has been a truly unprecedented year. It has
been a year where we have seen financial hardship, illness and political division at a new level, a year where it seems like humans are clamoring for any normalcy, nostalgia and tradition they can find.

Christmas has represented goodwill and peace since its origin. Beginning on Christmas Eve in 1914, Allied and German soldiers ceased their bloody combat and sang carols from the trenches. On Christmas morning they rose from the trenches, exchanged gifts, and played games.

In an excerpt from History.com, a German WWI lieutenant reflected on “how marvelously wonderful, yet how strange it was. The English officers felt the same way about it. Thus Christmas, the celebration of Love, managed to bring mortal enemies together as friends for a time.”

If Christmas has the power to bring even a shell of peace and harmony during an otherwise tumultuous time, why not start early this year? Thus, I am a proud Novembrist.

The 30th president of the United States, Calvin Coolidge, said it best: “Christmas is not a time or a season, but a state of mind. To cherish peace and goodwill, to be plenteous in mercy, is to have the real spirit of Christmas.”

Don’t we all need more of that? Why not start earlier?