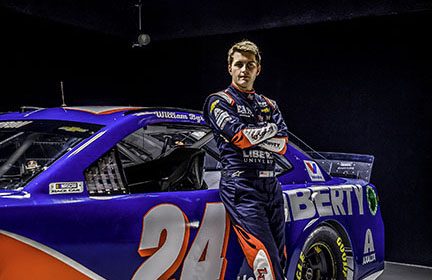 William Byron continued his mini hot streak on Sunday during a historic and chaotic Bank of America ROVAL 400 at the Charlotte Motor Speedway ROVAL. Byron finished in sixth place and tied teammate and eventual winner Chase Elliot for the most laps led, with 27. However, the race was anything but straightforward.

Byron started in the 13th position, but with torrential rain pelting the Charlotte Motor Speedway all morning and early afternoon, a different challenge presented itself. The wet racetrack meant that for the first time in NASCAR Cup Series history, rain tires would be used to start the race.

Byron moved up to 11th by the time the competition caution came at lap 10. After pitting for four fresh rain tires, Byron went on a tear, moving up from his 22nd place restarting slot all the way up to seventh before pitting again for dry tires on lap 18. Right after he made the pit stop, a caution came out for the No. 38 of John Hunter Nemechek, who got stuck in turn six.

Restarting at 10th, Byron went on another tear during a chaotic one-lap sprint to end stage one, slicing and dicing his way to fourth place by the end of the stage.

Byron’s speed carried over into stage two. He restarted on the inside of row two and took the lead away from the No. 95 of Christopher Bell on lap 30, holding onto the lead for 10 laps before Ryan Blaney passed him on lap 40.

Byron pitted once more on lap 47 after the No. 77 of Quinn Houff stalled in turn five. Some cars stayed out, however, and Byron would restart in 13th. Byron pulled a banzai four-wide move going into turn one on the restart and propelled that into another seventh-place stage finish.

Fortage three, Byron started on the front row in second place and once again took the lead away from Christopher Bell. Byron maintained the lead until lap number 71 when he pitted for tires and fuel to make it to the end of the race. Byron came out of pit road in sixth, but a speeding penalty moved Byron all the way to the back of the field.

Byron, however, refused to give up as he muscled his way through the field left and right over the final 35 laps. Aided by a caution flag pit stop with 23 laps to go and a tangle between Martin Truex Jr. and Ryan Blaney, Byron ended up finishing back in sixth.

With the ROVAL out of the way, Byron will now set his sights on the mile-and-a-half Kansas Speedway on Sunday for the running of the Hollywood Casino 400 at 2:30 p.m. on NBC. Byron has experienced great success at Kansas, finishing fifth last fall and finishing 10th after leading 27 laps back in July. Byron can also equal his career high in top 10’s or top fives if he finishes in either the top five or 10.

Joshua Lipowski is a Sports Reporter and the host of the “Further than the Cheap Seats” podcast. Follow him on Instagram at @j_lipowski23.