What is the Falkirk Center? Liberty University joins Charlie Kirk to create a new kind of think tank to promote faith and liberty on college campuses 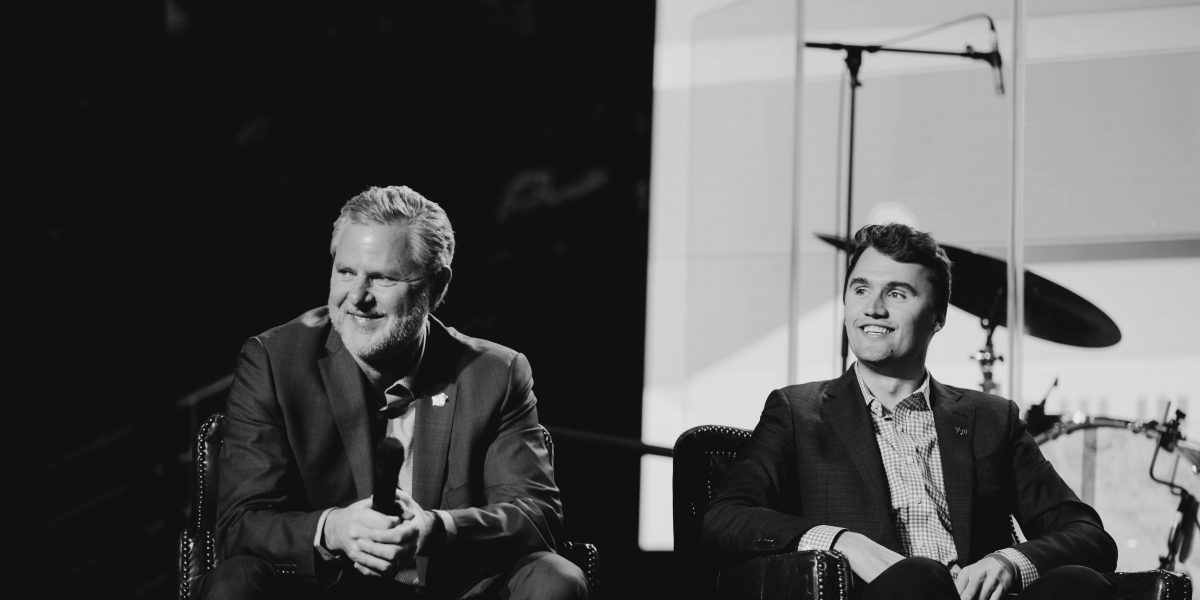 On Nov. 30, 2019, Liberty University announced its partnership with political activist Charlie Kirk with the creation of the Falkirk Center, a modern think tank set to renew and defend God-given freedoms and Christian principles throughout American politics and culture.

Although the center is not a traditional think tank according to Executive Director Ryan Helfenbein, the Falkirk Center strives to be a cultural influencing tool that exists for college students to actively engage in and have their voice heard.

“This is not your dad’s or granddad’s think tank,” Helfenbein said. “We’re trying to have massive cultural influence, and Gospel driven and Christ-centered cultural influence that also speaks to issues that culminate in public policy.”

As the Falkirk center looks to take on current social issues with the Bible as its compass, the center also looking to engage a younger generation of people who are passionate about standing for their Christian principles and reforming what the center believes is a leftist, progressive leaning culture.

Helfenbein said the vision behind this partnership is having Liberty University President Jerry Falwell who represents an older generation coming together with Kirk and a younger generation for the sake of the Gospel in
the public sphere.

Origin of the Center

The idea for the center was presented by Kirk when he pitched the idea to Falwell last year. Helfenbein said Falwell received the idea well, knowing that if Liberty was to be in a partnership with the center, it must be rooted in the Gospel and represent Liberty University’s missional values.

“The Gospel driven aspect is really coming from the president and it’s not just political,” Helfenbein said. “It is really the unification of both.”

Before the center took flight, the Falkirk Center built a team of cultural influencers and professional experts who could lead the charge in spreading the Falkirk Center’s mission. Unlike a traditional think tank, filled with research fellows who work towards creating policy, Helfenbein said these fellows are influencers and they are people who can reach audiences. Some of these fellows include Jaco Booyens, a producer and director who actively speaks out against the issue of sex-trafficking, and Antonio Okafor, director of outreach for Gun Owners of America.

The Falkirk Center also has another team apart from the fellows called the Champions, which consists of people who are experts in their professional areas such as Jenna Ellis, a senior legal counselor for President Donald Trump.

“We picked the fellows based on where they stood with their faith,” Helfenbein said. “These guys are committed and sold out for the Gospel, and they are people who are about political and civic engagement and getting out into the marketplace.”

On Jan. 15, 2020, students attending the first convocation of the spring semester caught a glimpse of the Falkirk fellows as they shared segments of their stories and their social and political involvement. Each fellow brings to the table a different background and advocacy campaign, but they all share the same goal of sharing the Gospel and training young Christians to be engaged in cultural issues.

Helfenbein said Christians must avoid getting confused about their principles while the progressive cultural movement is rising up to a fever pitch. This belief spreads into the goal of the Falkirk Center to restore Judeo-Christian values in American political culture, starting with the next generation of leaders.

“The world is constantly speaking out saying live your own truth,” Helfenbein said. “There is only one truth, and that is God’s truth.”

As the Falkirk Center looks to pave a way in 2020, Helfenbein said they want students to play a key role in the purpose of the center. The Falkirk Ambassadorship program is their way of trying to engage students on campus.

“In our ambassador program, we are looking for students who will come along with us and raise issues that students are concerned about,” Helfenbein said. “We hear that, and we want to give them a voice as well, and I think in a way that is amplified far beyond anything that we can
do as separate groups.”

Liberty students who are interested in joining the Falkirk effort, building relationships and positive connections can join the think tank by participating in the first chapter of the  Falkirk Center Ambassadorship program. Helfenbein said they hope to have everyone involved with the programs be hands on with what they are trying to accomplish.

Future of the Center

The Falkirk Center also plans on creating its own print journal, publishing articles written by the fellows and several guest writers. The inaugural journal is set to launch in the next month along with three other publication dates throughout the year. Guest writers like Lawrence Reed, president of the Foundation for Economic Education, and Newt Gingrich, former speaker of the house, plan to have articles featured in the first publication of the Falkirk Journal.

Helfenbein said their center will exist through their network and friendships of people who will come alongside them. The Falkirk Center also plans to add offices in Liberty’s Green Hall building, which will include a conference center and
flash studio.

“We are going to be far more focused on resourcing, connections and mobility,” Helfenbein said. “We want to lay down the groundwork through our ambassadorship, the fellows, print publication and reach on social media.”

Troutman is the news editor. Keep up with her on Twitter.