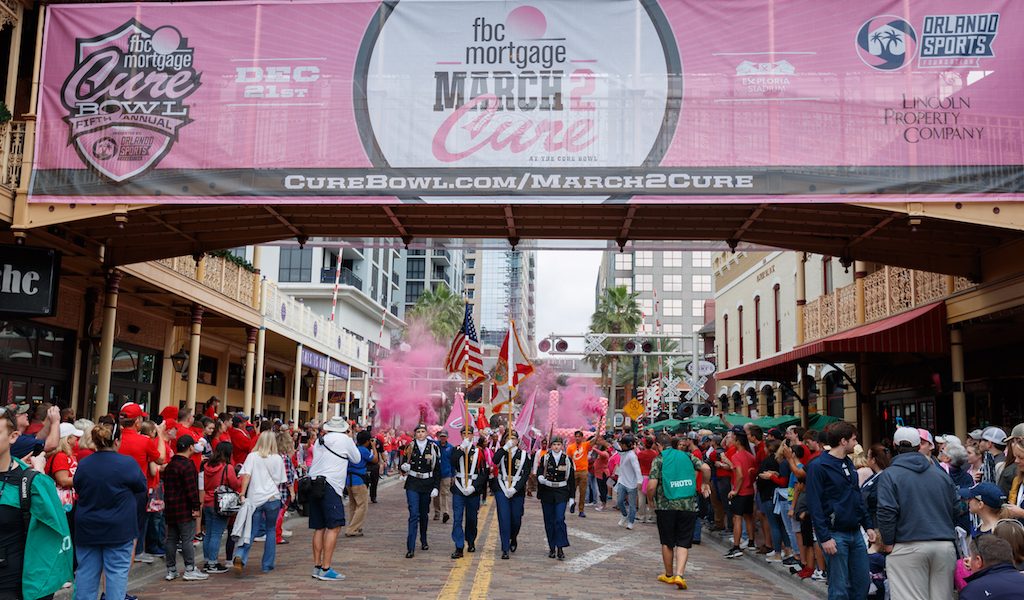 Early Friday morning, just one day before the Cure Bowl Dec. 21, students and Flames Club members gathered in the Liberty Natatorium. Students ran through check-in, bag checks, last-minute bathroom runs and trip information briefings before TSA agents screened each individual between the bleachers and the pool.

From there, everyone loaded onto the buses for transport to the Lynchburg airport, where they were driven through the back gate directly onto the tarmac beside the plane. Chanting “L-U,” everyone received a catering box from Chick-Fil-A and stepped onto their plane for a direct flight to Orlando, Florida, set to arrive early in the afternoon.

“Flying down was such a fun experience,” Liberty senior Kate Upson said. “It was so easy, and the bus drivers and volunteers made it a great experience. Landing in Orlando was so exciting, (and) the energy on the plane was very contagious, which made the experience that much more rewarding.”

The student and Flames Club trip, organized by Liberty Athletics, had a full itinerary of Cure Bowl events and kicked off with the Cure Bowl Pep Rally located at Universal CityWalk. The pep rally hosted bands and cheerleaders from both schools in a friendly battle of the bands competition.

Nightfall soon came and the students departed from Universal to Camp Wewa, a YMCA summer resident camp and year-round outdoor education facility, where they would sleep during the trip.

The next morning, game day, a tailgate commenced on Church Street Station, a picturesque block of downtown Orlando.

“Seeing Liberty (my dream school since age 8) students, athletes and staff march through the streets I’ve walked so many times was such a surreal feeling,” said Ben Hosaflook, a Liberty senior. “Watching Liberty win its first-ever bowl game, in my home city, with my dad and brother on my right and my lifelong friend on my left, was an experience I’ll never forget and one of my favorite memories at Liberty.”

The students filed into the Harry Buffalo sports bar for the official tailgate. With a clear bag in one hand and a free appetizer coupon in the other, they weaved their way through to the upstairs overlooking the sea of red that ebbed and flowed on the first floor.

The Exploria Stadium is a soccer-specific stadium, built to host Major League Soccer and National Women’s Soccer League games. The Cure Bowl was its first non-soccer sporting event, according to the Exploria
Stadium website.

“My favorite day (of the trip) was game day,” Upson said. “Our student section was incredible, and we kept getting compliments from the staff at the Cure Bowl, saying we were one of the best student sections they’ve ever hosted.”

The Liberty football team put in a historic performance to reward the fans’ long trip to Orlando. Quarterback Stephen Buckshot Calvert and wide-receiver Antonio Gandy-Golden, shone alongside the rest of the team’s seniors for their final college football game, beaming as the team collected the bowl game trophy.

“Watching the boys win was incredible and I couldn’t be prouder to be a Flame,” Upson said. “It was such a fun weekend and I’m so thankful that Liberty made this opportunity available and inexpensive for students.”