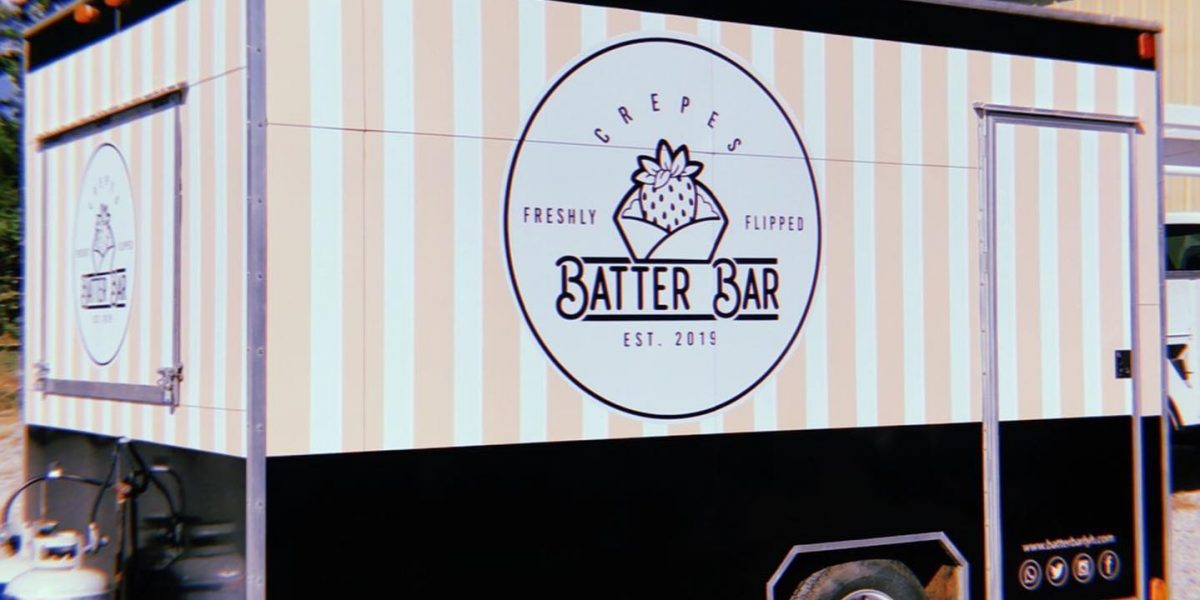 The flavor and fun of the Harajuku neighborhood in Japan has come to Lynchburg in the form of two sisters, a trailer and lots and lots of sweet and savory treats.

Nicole Davidson and Chelsea Doebler are the sisters, a kitchen-on-wheels is the trailer and crepes are the treats in the new food truck: Batter Bar.

Batter Bar serves cone-shaped crepes, a unique food from Harajuku (a Japanese neighborhood known for fashion) stuffed with anything from bananas and caramel to bacon and avocado. According to Davidson, these crepes and their names, including Davidson and Doebler’s favorite, “Banana Yas!” are made to put a smile on customer’s faces.

“Almost every time we hand a crepe out of the window, someone is smiling,” Davidson said. “It makes someone who is older feel like they’re a kid again.”

To Davidson, these crepes serve as an ice cream cone-shaped dream come true of opening her own food truck. After graduating from Liberty in 2011 with her undergraduate degree in family and consumer science and 2015 with her master’s in education, Davidson moved to Nashville and worked as a chef at a sushi restaurant and later at a catering company. But her dream and a desire to be with family again drew her back home to Lynchburg.

“I had jokingly said to Chelsea in January 2019, ‘I kind of want to see my niece grow up.’ I only got to see her maybe four times before I moved back,” Davidson said of her now 3-year-old niece. “So I said, ‘Chelsea, would you open a restaurant or a food truck with me?’ And she told me no.”

Doebler, who graduated from Liberty in 2015 with her undergraduate degree in family and consumer science, had also been working in food services as a chef and a barista on top of being a mom.

Despite the initial unease, Davidson decided to move back to Lynchburg a few months later, and their conversations became serious. Over the next few months, they put their ideas together and took the first steps, including buying a trailer and having a high school friend design their logo.

Their choice to serve crepes as the main dish came from the cultural trend towards different Asian foods and the owners’ childhood memories of buying crepes at the market on Saturday mornings.

The Harajuku crepes seemed to fit the ticket. Officially opening in November 2019, the sisters have seen a good turnout, especially considering it is currently the offseason for food trucks.

Family, however, did not just play a role in getting Davidson back to Lynchburg. Growing up in Lynchburg, they still have many friends and family in the area supporting them, especially their dad.

“(Our dad) and our mom are probably our biggest fans,” Davidson said. “Honestly, nine times out of 10 when someone is like, ‘Oh so and so told me about this,’ it’s usually our dad.”

Their grandmother has also played a role in their passion for cuisine. The sisters recall her spending hours in the kitchen, especially during Christmas when she made her signature Christmas cookies. She now has dementia, but that has not stopped her from supporting her granddaughters.

“Every time we see her, she forgets that we have a truck, so we tell her all over again and she gets really excited all over again,” Davidson said. “It’s cool to see her in her phase of life where it can be a sad thing, but the times that she has come out to the truck, she just is really excited and that’s been a couple special moments for us to have.”

Their grandmother also gave each of the sisters a handwritten copy of the family recipes that they plan to use at Batter Bar in the future, expanding the menu to also incorporate pastries.

The sisters are also working on having a more permanent, pop-up spot in downtown Lynchburg that they are hoping to announce soon.