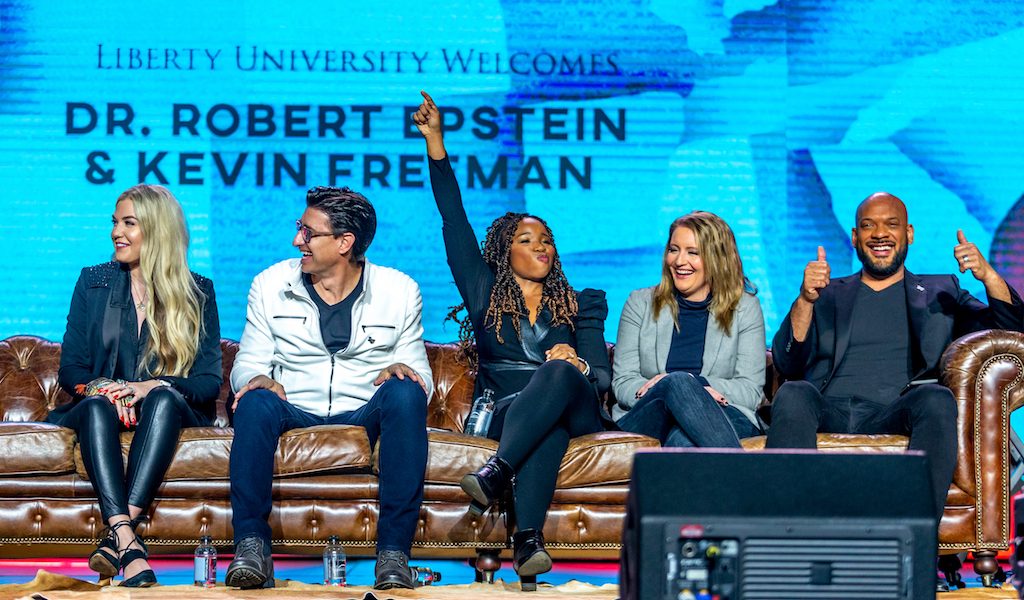 On Wednesday Jan. 15, the Vines Center stage was packed with political influencers, aiming to promote the integration of faith and liberty in the public sphere.

“We are here today because all of us are Christians that believe that our culture is in crisis,” Kirk said.

Kirk has been a vocal member of conservative American politics since founding TPUSA at 18 years old. His growing prominence as an author and activist makes him a regular guest on various news outlets, including Fox News, Fox Business and CNBC. Kirk was the youngest speaker at the 2016 Republican National Convention.

“First and foremost, we proclaim the truth of Jesus Christ and the Gospel, and then secondarily we talk about how that intersects with American founding liberties and first principles,” Kirk said, describing the general mission of the recently launched Falkirk center.

Falwell emphasized why he thinks intertwining faith and politics is important.

“Every question that you have in life can be answered within the words of Jesus,” Falwell said.

Joining the co-founders on stage were prominent figures in conservative politics, including Jenna Ellis, a senior legal advisor to President Donald Trump. Ellis spoke on how Christians should approach the post-modern worldview that truth is subjective.

“Truth does not change,” Ellis said.

Antonia Okafor, the national spokeswoman for Gun Owners of America, focused on her belief that women were seeking empowerment in the wrong places, namely in modern feminism. Okafor reflected on her own story of being sexually assaulted at a young age, and turning what she said was once weakness and defeat into a drive to protect herself and other women.

Ryan Helfenbein, the executive director of the Falkirk Center, joined the panelists saying that the goal of this new venture is to address current cultural questions from a well-educated, Christ-centered point of view.

During the second half of Convocation the panelists were joined by Dr. Robert Epstein and Kevin Freeman. Nasser interviewed the two men who spoke on the increasingly invasive nature of Google and other corporations that are using search engine manipulation tactics to influence marketing and even swing votes.

“We are all in trouble,” Epstein said, “they (tech companies) have power that is obscene, and they exercise that power.”

The following day, the panel of fellows joined Robert Hurt, dean of the Helms School of Government, and Dave Brat, dean of the School of Business, at Convo Select to further discuss the mission of the Falkirk Center and get students involved with the think tank.