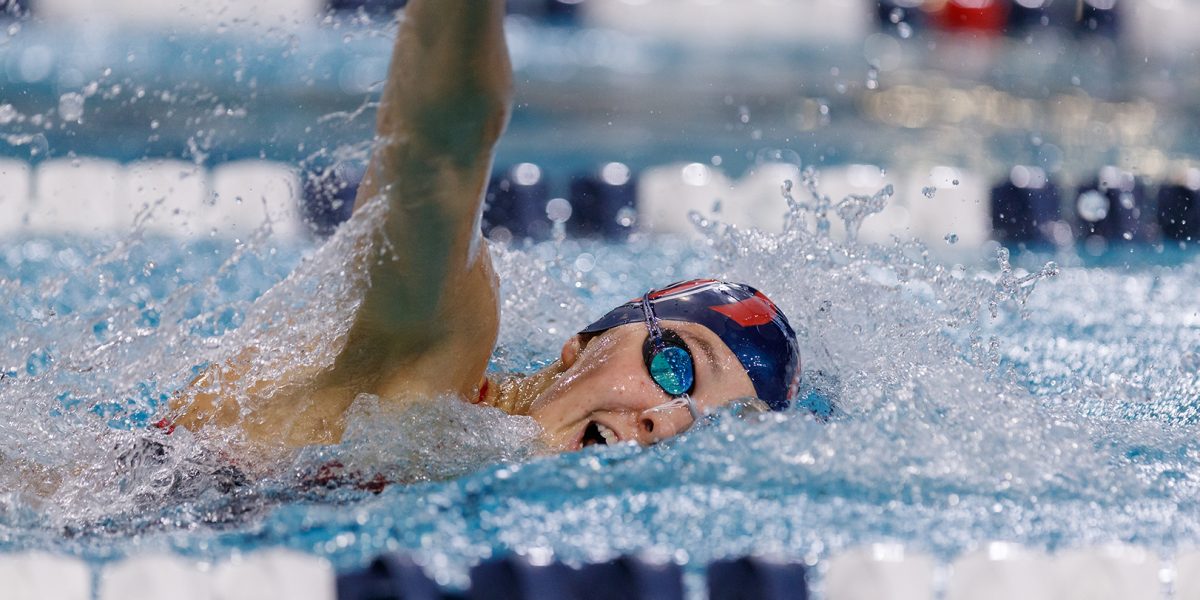 Baker was told by several universities that her nursing degree was too rigorous to be able to play a DI sport. But Baker knew there was a place that would let her both swim and pursue her
academic goals.

Baker has been swimming since age 3 and comes from a family of athletes. Her mother and sisters also swam at the collegiate level and her father played football at Princeton. Although Liberty was not her first college choice, she believes God led her to the university to swim while pursuing her nursing passion.

“Through it all, I just saw God really directing me here to Liberty,” she said. “A lot of other schools told me I couldn’t do nursing and swimming together, and I wanted to be a nurse since my sophomore year in high school, so it just worked out.”

Head Coach Jake Shellenberger said that Baker is a rare competitor who combines character, academics and athletic success in her life.

“There’s a triad of character, athletic ability, and then you have the academics,” Shellenberger said. “It’s extremely rare to find someone who does all three and does all three at the elite level. So, that’s what Hannah brings – not just the athletic or the academic, but then the moral quality as well.”

Baker is a four-time school record holder and one of the captains for the team this season. After completing her time in the nursing program with a certificate in maternal child critical care, Baker is looking towards working with children, specifically in pediatric oncology.

Even though Baker has achieved success within swimming and academics, she does not neglect her spiritual life. Baker expressed how important it is to her that the program puts God front and center in everything it does.

“What makes Liberty special is how … we strive to keep Christ the center of our program,” she said. “A lot of us as teammates share that aspect and we can have deeper relationships because we share our Christian background.”

As Baker looks ahead to graduation and beyond, she expressed how much she will miss the Liberty community.

“I will miss having a constant community,” she said. “If I’m going to the library, I can find a teammate. If I go to dinner, there’s always a teammate there. I’ll miss being surrounded by 30 girls my age pouring into me and having fun (together).”

Wrapping up the fall season, Liberty competed at the TYR ‘85 Invite in late November. Baker was a finalist in the 100-freestyle, finishing the race at 52.88.

Liberty’s swimming and diving team will compete in the CCSA championships starting Feb. 19. Before that, they will compete at the Toyota U.S. Open, part of the USA Swimming program Dec. 4-7.