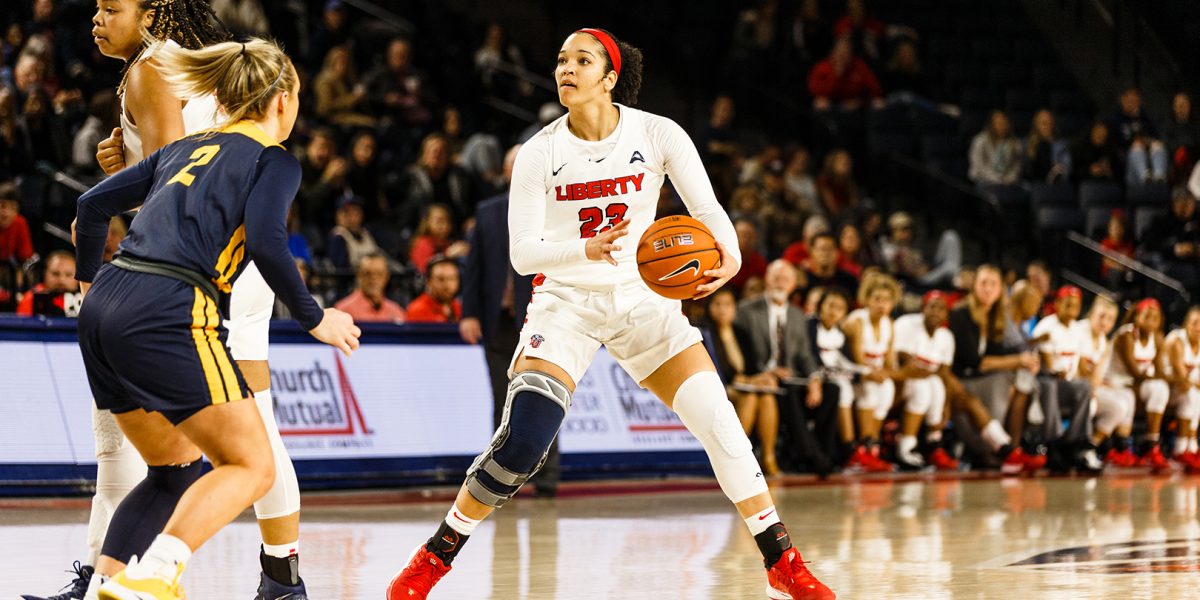 Junior forward Emily Lytle averaged over 20 points a game for her high school basketball team and made the Tennessee all-state team twice. But despite her current status as one of the elite scorers in the ASUN, her freshman season in college was anything but easy.

After committing to the University of Arkansas at Little Rock, Lytle looked to continue her prolific scoring. Instead, she struggled through a freshman season where she saw little playing time and did not contribute much to the team’s offensive load.

Lytle transferred after that season to Liberty University, redshirting her sophomore year. That year off helped propel her into her debut season with the Flames last season, where she led the team in scoring.

Lytle averaged over 12 points a game last season and shot an impressive 37% from 3-point land, cementing herself as one of the best shooters in the ASUN.

“She’s an outstanding shooter,” Head Coach Carey Green said. “It’s important to have a balance (of inside and outside scoring), otherwise your opponent will try to eliminate your strength. Any successful program needs that balance of inside and outside.”

Lytle credits part of her improvement to a difference in position. At Little Rock, she played exclusively one position, while Liberty moves her around, which she said allowed her to explore her game.

Coming into her junior season, Lytle has struggled a little bit to start the year, converting under 20% of her 3-point tries in the team’s first four games.

“She’s had a tough start,” Green said. “I expect more out of her, and I know she expects more out of herself. She may be trying to do too much, so we’re trying to take the pressure off of her and just let the game come to her.”

Lytle identified ball handling as an area where her game needed the most improvement.

“When I get going, it’s easy for teams to get in front of me and take charges,” Lytle said. “It’s hard for me to stop, and they know I’m going to the cup.”

That competitive energy Lytle possesses sparks the Lady Flames offense consistently. She frequently dominates games when she finds her shooting rhythm. Her offensive prowess was most evident during a home game against Lipscomb last season, when she scored the first 13 points of the game for either team.

Green hopes to help Lytle see the value in pacing herself on the court.

“If I could just get her to slow down, I guarantee her efficiency would go up,” Green said. “She wants to win so bad that an outside observer could be asking if she can’t see some other things (on the court). I think being so competitive sometimes clouds your judgment. She just needs to slow down a little bit.”

Liberty’s team as a whole has slogged through the beginning of the year, losing six of eight games so far. The team encountered a similar slow start last season before recovering to make the ASUN tournament championship game.

As the team looks to get back into form, Lytle will continue to work on her game as she joked about her only goal for her last two seasons at Liberty:
“two rings.”