It’s Cure Bowl weekend, and here’s what you need to know 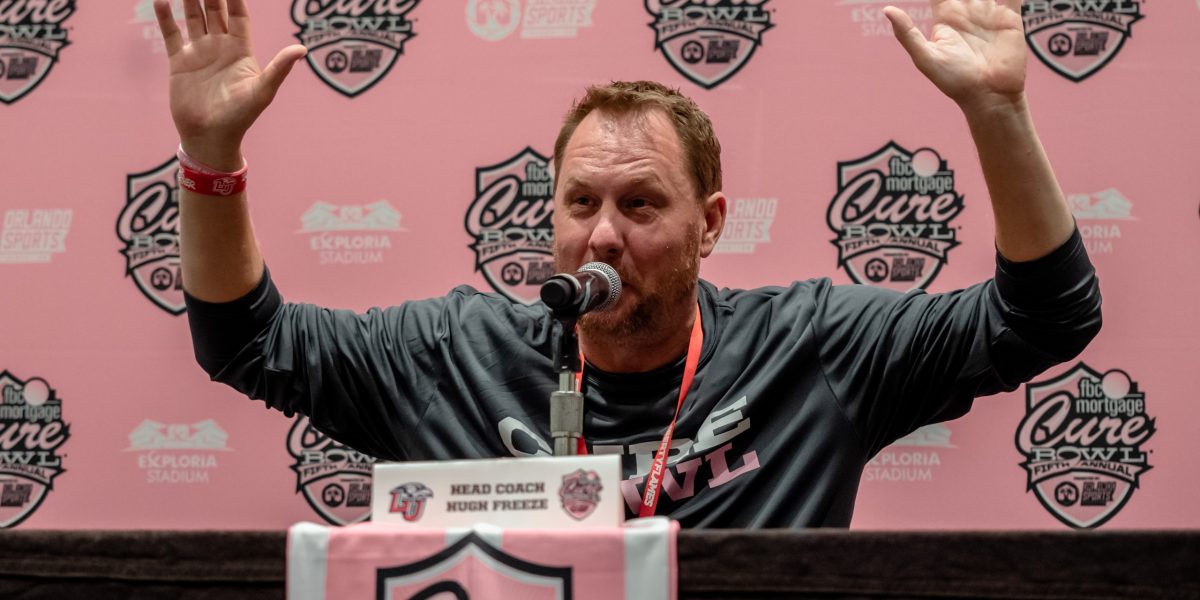 Because of Exploria’s unique soccer-style build, the stadium has covered seating that both enhances sound and shields spectators from the rain, as well as 360-degree viewing, a massive fan plaza and an all-natural grass field. Fans can expect to hear their cries echo across Exploria louder than most other regular football stadiums.

The grass field will also be somewhat out of the normal for the Flames, who generally play and practice exclusively on turf at home. The only stadiums with natural grass fields the Flames have played in this season are BYU’s LaVell Edwards Stadium and UVA’s Scott Stadium.

Redshirt senior running back Frankie Hickson said the opportunity to practice on a grass field in Orlando was a big help to prepare for Saturday.

“We’re still getting used to playing on grass,” Hickson said. “All we do is practice on turf and play on turf, but we have some grass to play on in the stadium Saturday.”

But Saturday isn’t the only day that Orlando and Cure Bowl fans and families will be celebrating. The entire week is packed with celebrations and events for Flames fans and Eagles fans to attend, from a fan fest in ICON Park to a Battle of the Bands on the Universal CityWalk Friday afternoon.

“We’re still getting used to playing on grass. All we do is practice on turf and play on turf, but we have some grass to play on in the stadium Saturday.” – Frankie Hickson

The festivities officially began Wednesday night with a Cure Bowl welcome reception, hosting both football teams at the Universal CityWalk Lagoon. Both teams had the opportunity to take photos, enjoy popcorn and pretzel snacks and greet their opponents.

Both teams participated in the official Cure Bowl press conference Thursday afternoon, which included interviews with Flames Head Coach Hugh Freeze and Eagles Head Coach Chad Lunsford, as well as several players from each team. Both teams also had the opportunity to shoot photos with the Cure Bowl trophy.

Things will quiet down for a little while after that, giving the Flames and their fans an opportunity to enjoy Orlando Thursday afternoon and Friday morning. Many Liberty students are taking the opportunity to arrive in Orlando early and enjoy a day at Universal Studios or Disney World, and even more will be arriving Friday.

Georgia Southern fans will have the opportunity to enjoy a night at Orlando’s ICON Park Thursday from 6 p.m. to 9 p.m. when the Eye of Orlando Ferris wheel will be lit in Eagles colors and special discounts and offers will be available to fans.

The Bowl festivities will pick up again Friday afternoon with some of the Flames cheerleaders and Flames players attending a J.A. Edwards “Feeding Children Everywhere” Hunger Project, where they will be able to assemble meals to feed hungry children and families in partnership with the Orlando Health Center UF Health Cancer Center.

After that, both Liberty’s Spirit of the Mountain marching band and Georgia Southern’s Southern Pride marching band will participate in a battle of the bands on Universal’s CityWalk. Both bands will play back and forth to entertain fans and CityWalk visitors and to build excitement for the Cure Bowl the next day.

ICON Park will offer another fan festival from 6 p.m. to 9 p.m. Friday night, this time for Flames fans. The Eye of Orlando will be red, white and blue in Liberty colors, and Flames fans are encouraged to wear red as well.

Saturday’s excitement will begin early with team tailgates beginning as early as 10 a.m., followed by the March 2 Cure block party at 10:30 and parade at 1 p.m. The parade will lead the way from the tailgate to Exploria Stadium, featuring both the Spirit of the Mountain and the Southern Pride, as well as other groups and marchers.

Exploria Stadium’s gates will open at 1:30 when the March 2 Cure arrives, just an hour before the Cure Bowl’s 2:30 p.m. kickoff. Pregame and halftime performances will be put on by the Spirit of the Mountain and the Southern Pride.

Fans who would like to attend the Bowl but can’t make it in person can still purchase proxy tickets, the proceeds from which will be donated to military members and cancer survivors in the Orlando area.