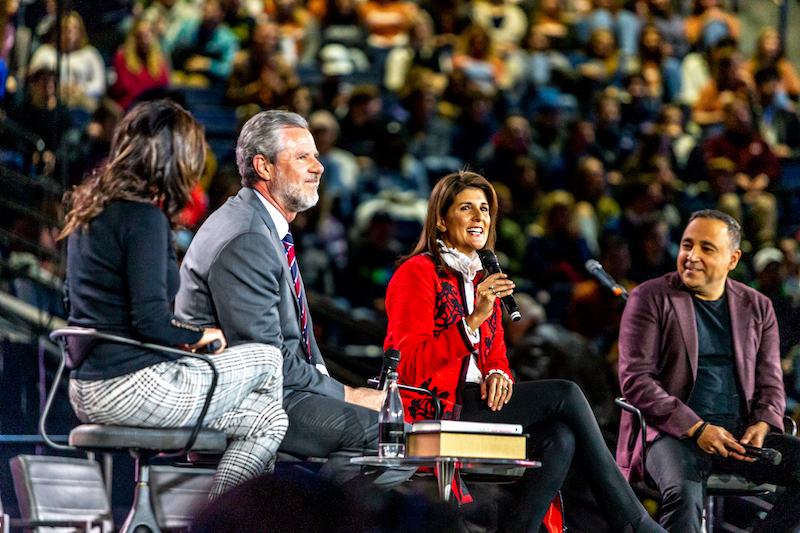 Nikki Haley is no stranger to being different. The first female governor of South Carolina (2011-2017) and the daughter of the only Indian immigrant family growing up in a rural South Carolina town, Haley is aware of what it feels like to be judged for things she cannot change about herself.

During her Nov. 15 visit to Convocation, Haley shared that as a child, she was never white enough to be white and never black enough to be black. Kids bullied her on the playground because of this. Haley’s mom gave her advice that would impact her the rest of her life.

Haley said this lesson carried her through her time as a legislator, governor and U.S. ambassador to the United Nations. It also helped her find common ground in dealing with those who disagree with her.

“When you’re faced with a challenge, if you first talk about the things that you agree on, everyone lets their guard down and then you can actually get to the true challenge and reach a solution in the process,” Haley said.

As the former U.S. ambassador to the United Nations, Haley said understanding the painful feeling of being bullied for being different helped her understand the importance of standing up for others.

Known for “kicking with a smile,” Haley said leading with both grit and grace in a culture of disrespect is possible.

In her time as a leader on the state and national level, Haley has been an advocate for the unborn, the persecuted church and the nation of Israel. While governor, Haley led the state of South Carolina through some of its darkest days in recent history.

One of those times came on June 17, 2016, when nine people lost their lives in South Carolina’s first shooting in a place of worship. Dylann Roof opened fire on Emanuel African Methodist Episcopal Church in Charleston during a Wednesday night Bible study. Roof killed nine African-Americans with the intention of starting a race war, according to the Washington Post.

“The state of South Carolina fell to her knees,” Haley said.

In the days that followed, Haley attended each of the funerals and witnessed the families grieve their loved ones. Haley said the families of the victims forgave the killer when he appeared before the judge two days after the shooting.

Haley said the state of South Carolina responded to the tragedy with vigils instead of riots, and hugs instead of protests, which began the first step of the healing process. In those tough moments, her faith was all she had to cling to.

“The one thing that I will say saved me was my faith. Because that’s when I really threw it in God’s hands and said … ‘I need you to get me through this,’ … That’s when I felt my faith grow to something so much bigger than me,” Haley said.

In the days that followed, Haley made the decision to take the Confederate flag down from the statehouse grounds due to the connotation it holds and its association with the killer. This decision resulted in backlash from some and praise from many. Haley revealed that she developed post-traumatic stress disorder (PTSD) because of the tragic events she had to lead the state through following the shooting.

“We don’t look for politicians (who) pretend to be perfect,” Senior Vice President for Spiritual Development David Nasser said. “We look for people who are people, who want to lead people to a better day.”

While sharing what she learned through past experiences, Haley encouraged Liberty University to stand up for what they know is true, even if they have to stand alone.

“People need to know the power of their voice and they need to be able to use it. Elected officials need to know to listen to this,” Haley said. “Every one of you has that power and it’s a power you should hold very dear and when you see something wrong, you should say it. When you see the grain going this way, it doesn’t mean you should go that way.”

As ambassador, Haley held to her convictions, even when she stood alone. Haley vocally disagreed with senior level White House officials Rex Tillerson, who served as secretary of state, and Chief of Staff John Kelly at times. Her loyalty was always to the president and the American
people, she said.

Many of her decisions in life and the stand she takes stem from her mom’s advice to “push through the fear.” Haley said that if she had not pushed through the fear, she would have never become a legislator, governor or ambassador. She encouraged Liberty students to do the same.

To conclude Haley’s visit to Convocation, Nasser called his younger brother Benjamin “Benji” Nasser to pray for strength and peace for Haley and her family. Benji turned 40 years old this week and all of Vines Center sang “Happy Birthday” to him.

Haley met hundreds of Liberty students after convocation in the practice gym in the Vines Center for a meet and greet and photos. Her second book, “With All Due Respect: Defending America with Grit and Grace,” came out Nov. 12, and was offered to Convocation attendees for a discounted price of $5.