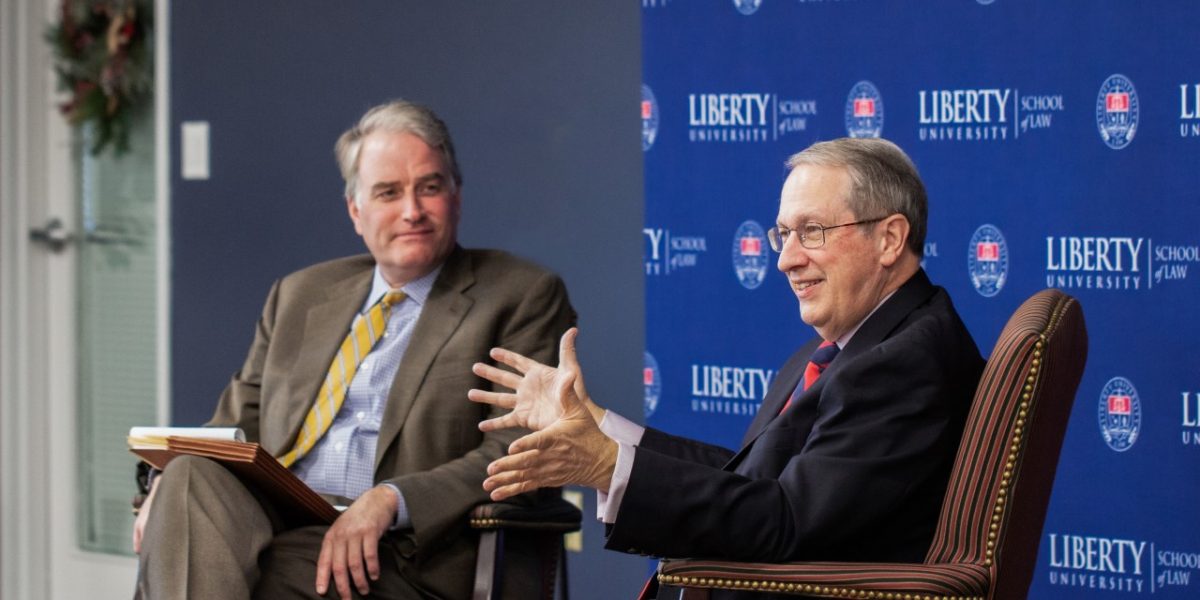 With the impeachment inquiry stirring in Washington, D.C., Liberty’s Center for Law and Government brought in an expert on the matter, hoping to better understand the current impeachment process happening in the U.S.

Bob Goodlatte, former U.S. congressmen of Virginia’s 6th district, sat down with Robert Hurt, dean of the Helm’s School of Government Wednesday, Nov. 20, in the Liberty School of Law’s Mountain View Room for a “Conversation with a Congressman.” Throughout the event, Goodlatte touched on several aspects of impeachment, ranging from the history of the congressional power to how the inquiry is playing out today.

During Goodlatte’s congressional career, he served as a chairman on the House Judiciary Committee, which reviews impeachment inquiries throughout the federal government. Goodlatte saw two impeachments of federal judges during his time on the judiciary committee along with the impeachment of former President Bill Clinton.

“Students studying government … are learning about these constitutional issues and getting to hear from somebody who has some pretty impressive personal experience,” Hurt said. “We are always looking for ways to get engaged with people with influence and it’s our hope that (the students) will benefit from his experience and wisdom.”

As students and faculty listened to Hurt and Goodlatte engage in dialogue about impeachment, Goodlatte took everyone through his history in Congress and his knowledge on how to determine whether an impeachable offense was committed. Goodlatte said treason and bribery are easy to understand as means of impeachment but the phrase ‘high crimes and misdemeanors’ is not as easy to translate to the current climate from its vague original  meaning of misconduct of an official.

“Being able to remove somebody from office is a pretty powerful tool and I think that (the founders) struggled to define under what circumstances could somebody be removed from office,” Goodlatte said.

Johnson came out of the impeachment inquiry without a vote of conviction against him and nothing happened in terms of impeachment of a president until 100 years later when Richard Nixon became a target for impeachment, Goodlatte said.

When Goodlatte was in his third term in Congress and on the Judiciary Committee, he saw firsthand the impeachment process of President Bill Clinton. When an impeachment inquiry begins, Goodlatte said the process should start in the Judiciary Committee where they determine if the person committed an impeachable offense through a series of hearings.

The current impeachment inquiry against President Trump did not start in the Judiciary Committee but in the Committee on Intelligence.

“The Democrats have been playing catch-up and have been severely criticized for starting what they call an impeachment inquiry before ever getting a formal vote for that,” Goodlatte said.

According to Goodlatte, he believes the reason for jumping ahead of a formal vote was due to the lack of support the Democrats might have had from members of the House on their side of the aisle who were nervous about running for reelection if they voted for an impeachment.

After covering the history of impeachment in the U.S., Hurt shifted the conversation into Goodlatte’s take on how the current process is going in the House. Goodlatte gave the audience four standards that an impeachment must meet in order for it to be successful, saying there must be a criminal offense, bipartisan agreement, strong public support and a process that commands the respect of the Senate if it were to get there.

“When it comes to President Trump, there are shortcomings on all four of those right now,” Goodlatte said.

Goodlatte noted the importance of strong public support but said the country has always been divided over President Trump, and they are similarly divided over the impeachment.

The conversation with Goodlatte closed with questions from people in the audience. One audience member, Nathan Hines, chairman of Liberty’s College Republicans chapter, said it was interesting to get some insight into how an impeachment works, what has happened in the past and how it is playing out today.

“It is always great to hear from a former congressman, especially someone with as much experience that Congressmen Goodlatte has, and him talking about impeachment was very interesting, especially given today’s political climate and what’s happening on Capitol Hill.” Hines said.

Goodlatte left the audience with his final thoughts on the power of impeachment and reiterated what House majority leader Nancy Pelosi said, “follow the truth wherever it leads.”

“Because this is the most important tool, lowering the threshold and cheapening impeachment could allow future presidents to claim impeachment is just a political thing instead of using it as a tool to protect the people,” Goodlatte said.