Antonio Gandy-Golden: Flames wide receiver looks ahead to NFL prospects in the future 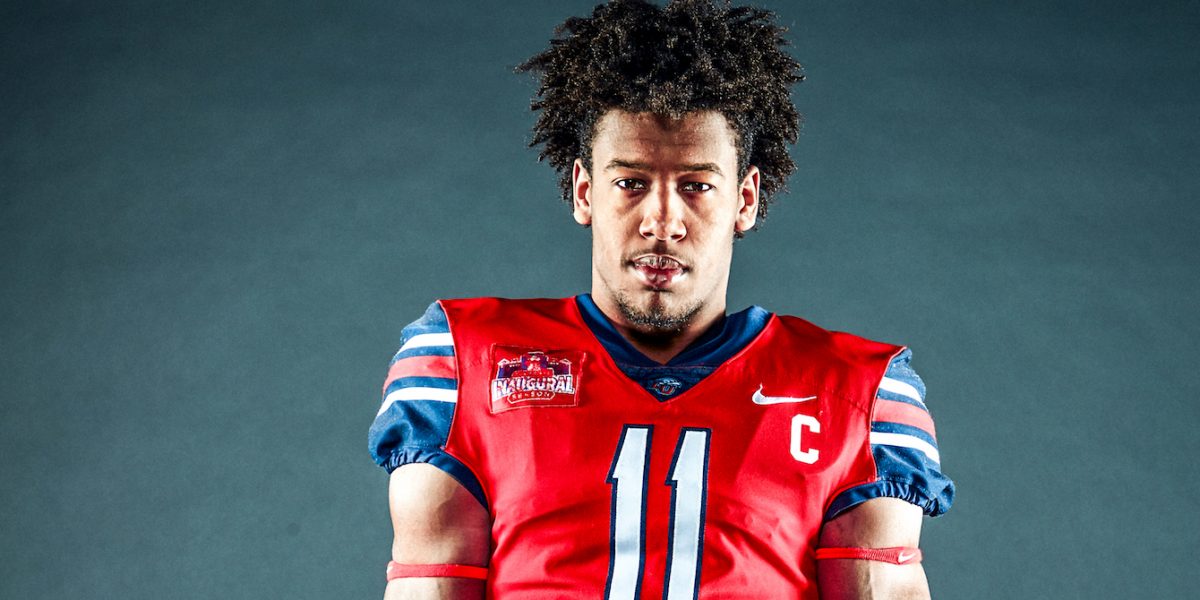 One-handed catches. Shattering Liberty football’s all-time receiving record. Leading the Flames to their first time of bowl game eligibility. Propelling himself to the top of many NFL draft experts’ projections.

These are blessings Liberty wide receiver Gandy-Golden has never been able to take for granted.

As a young child, catching pig skins was the last thing on Antonio’s mind as the hum of police and ambulance sirens echoed in his ears.

At 8 years old, Antonio couldn’t fully comprehend the dangers lurking within his Chicago neighborhood, one of America’s most crime-ridden cities.

“You listen to the news. You learn that someone has been shot and killed,” Antonio’s mom Monet Gandy said. “We lived in the heart of the city, so we constantly heard sirens and ambulances. It was nonstop.”

In his neighborhood, Antonio could not ride bikes or play at parks. Antonio’s world was limited to his grandmother’s fenced yard for safety.

“In Chicago, I had to play it smart and stay out of certain areas,” he said.

Despite the violence and continuous sirens, Antonio found avenues for entertainment. While at home, he climbed trees and solved puzzles. Occasionally, his grandfather took him and his cousin to the skatepark in downtown Chicago.

“Antonio was always a smart kid,” Monet said. “Every chance we got, we would go to the store and buy him small puzzles. We would just sit around and put puzzles together.”

Eventually, Antonio learned how to solve a Rubik’s Cube, a task he can now accomplish in less than 50 seconds.

But something had to change. Monet wanted an environment where her children could play outside, free from Chicago’s toxic atmosphere.

After saving money, Monet chose to move in 2005 to Dallas, Georgia, a peaceful location far from the constant noise and danger Antonio had grown up with.

The new environment gave Antonio his first experience with football because of his babysitter, who played catch with Antonio and his best friend who lived in the same apartment complex.

Antonio had always been good at catching things, but this interaction was
different.

“I credit our babysitter for (me) being able to catch a ball,” Antonio said. “It was either get hit in the guts or catch the ball.”

What started as a pastime evolved into something he could never have imagined.

For a whole season, Antonio watched his friend’s practices, but he didn’t express interest in playing until seventh grade, and when he did, his football career started to slowly take off.

He didn’t even play during his first middle school season. But everything escalated between his freshman and sophomore years of high school when he hit a growth spurt.

“It seems like he woke up one morning and his feet were hanging off the bed,” Monet said.

Following four years of letter-winning seasons at Paulding County High School, Antonio brought his talents to Liberty University, despite having other offers. Because Antonio’s grandfather still lived in Chicago, he couldn’t attend many of Antonio’s games, but Monet occasionally shared video highlights.

“My dad was Antonio’s biggest fan,” Monet said. “If I could take anything back, it would be the fact that he would still be here to see and live through everything that Antonio has done to this point.”

He passed away one week before Antonio committed to Liberty.

“Liberty wanted me to grow as a man and as a person,” Antonio said. “And that really stuck out to me. So we all just really felt like Liberty was the place for me.”

After a breakout sophomore season at Liberty, collecting more than 1,000 receiving yards, Antonio found his niche.

Now standing at 6-feet-4-inches and 220 pounds, Antonio has established himself as one of the most dominant wide receivers in college football.

“(Antonio) has phenomenal talent,” Liberty Head Coach Hugh Freeze said. “He’s been hungry to be teachable. … He’s an NFL player, and I think he’s got a chance to have a long career doing this. I think he deserves to be (in the NFL).”

Antonio was even named a Biletnikoff Award semifinalist, a prestigious honor that recognizes the best receivers in the Football Bowl Subdivision, among other recognitions. For one week this season, Antonio led the receiving yards list for all of college football.

“I get emotional just thinking about it,” Monet said, who chose motherhood over college when she discovered she became pregnant with Antonio. “I think about the football, but what I get most excited about is he is getting a chance to do something that our family has not had the chance to do. I’m just overjoyed. I know he’ll get that degree.”

Gandy-Golden said he would like to pursue something with graphic design following a football career. For next semester, he said he will finish his college degree online while preparing for the 2020 NFL Draft.

“I’m excited, but I’m also a little nervous,” Antonio said. “I didn’t expect this to come, but now it’s coming. I knew if I worked hard, it could happen.”

Before Liberty’s final game of the season against New Mexico State (Nov. 30.), Monet and her other sons stood beside Antonio as Liberty recognized the class of 2020.

Liberty claimed victory over the Aggies with a score of 49-28, securing hopes for the program’s first bowl game eligibility. Bowl game matchups will be announced Dec. 8.

“I love my mom. She’s been my rock since day one,” Antonio said. “She did whatever she could for me and my brothers to get us to the place we are now. I’m just proud of everything she has done, and I can’t wait to do something great for her.”