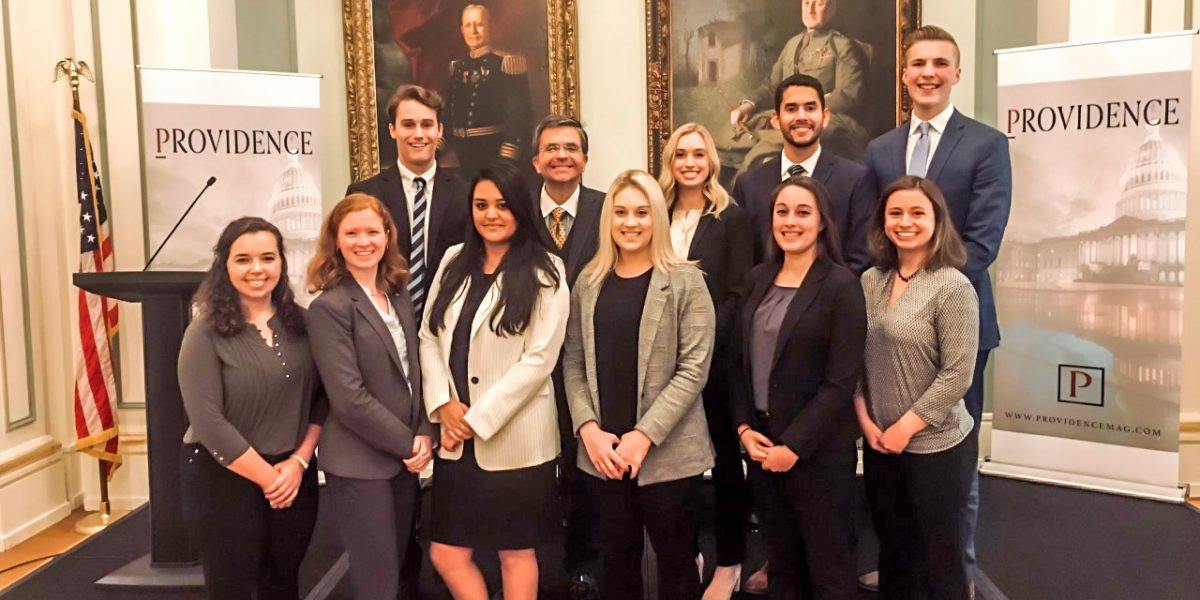 On Nov. 1 and 2, AHS traveled to The Army and Navy Club to attend the Christian and National Security: Exploring Government’s Divine Vocation conference to discuss the intersection of faith and foreign policy, as well as God’s purpose for government.

Providence Journal, a Christian foreign policy journal, hosted the conference with the help of Mark Tooley of the Institute on Religion and Democracy.

AHS is a non-partisan club dedicated to educating students in the importance of American leadership around the world in topics relating to national security, foreign policy and economics.

Morris said attending the conference reminded her of the importance of having Christians leading and serving in governmental roles impacting important policy decisions.

Liberty junior and AHS member Brielle Hoagland said a topic that stood out to her was when a U.S. Army chaplain, Colonel Timothy Mallard, shared how Christians should be supportive of veterans coming back home and more involved in the commissioning of protectors, like in the Old Testament.

Multiple graduate and undergraduate students of different denominations attended the event under the same banner of faith. Hoagland said it was refreshing to come together for the same cause.

“It was really a great time to come together and have that foundation of ‘We believe in Jesus,’ and then how does that impact what our nation is doing and how we interact with other countries,”
Hoagland said.

The panelists focused on the importance of protecting religious liberty around the world and how Christians are called to engage in effecting change in protecting the free expression of faith.

“Freedom of religion and the idea that our country was founded on ‘life, liberty, and the pursuit of happiness,’ applies to everybody, whether they agree with us or not,” Hoagland said.

“Christians need to be involved in government because we need to not only be promoting our way, but also ensuring that everyone else gets the chance to promote themselves and has the freedom to pursue their lives the way they have the rights and freedoms to do.”

One takeaway from the conference for Hoagland was how important it is to do her own research to become more informed and build counterarguments to make her views even stronger.

“If we really believe what we say we believe that our way is the right way, then we need to be on the forefront fighting for that and making sure our values are respected and protected,” Hoagland said. “With that we have to show the true meaning of tolerance, and I think that involves protecting other people.”