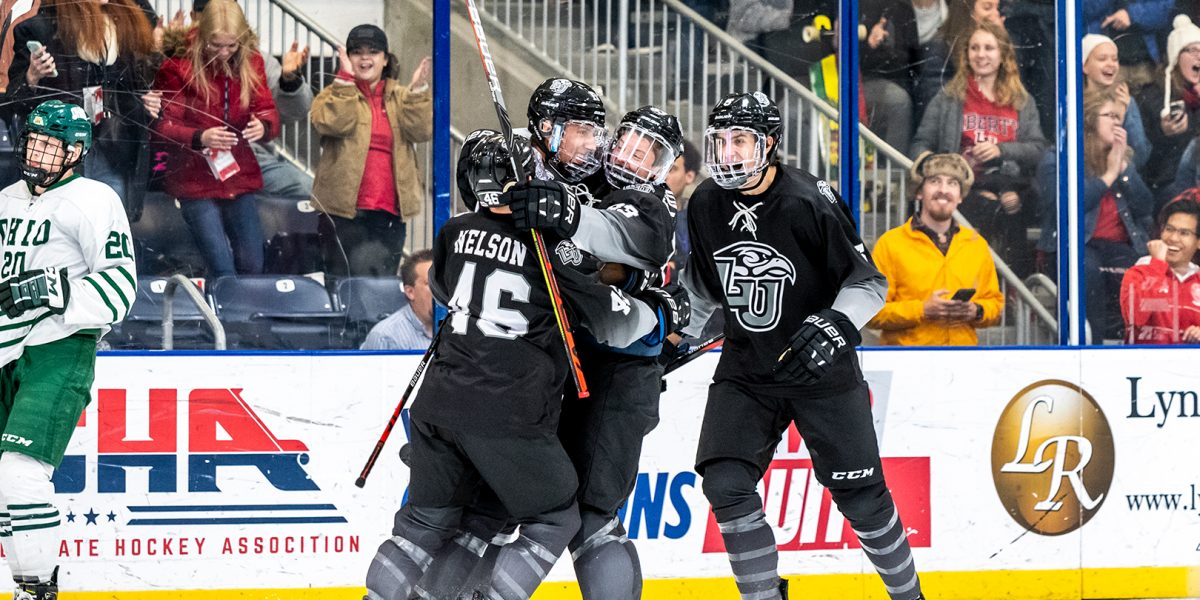 Electrified by the 3,611 students, prospective students and their family members packing the LaHaye Ice Center for College for a Weekend (CFAW), the Flames thumped Ohio University 8-2 in a Midnight Mayhem matchup Friday night where tensions ran high.

The Liberty men’s DI hockey team debuted its all-black uniforms during Friday’s game, the first of two games against Ohio University this weekend.

But the game started with a bang when 21 seconds into the game, Chaydan Lauber flew across the ice and catapulted Liberty into the lead with the game’s first shot. When sophomore Arturas Laukaitis slammed another goal past Ohio’s goalie a mere 8 seconds later, Ohio looked shellshocked.

“Ohio has always been a top-10 program,” Head Coach Kirk Handy said before the game. “We know the quality of opponent, and we think this game is going to be different because the fans know how good both teams are.”

However, with the energy filling the rink, tension followed close behind. As the Flames headed into the second period, they picked up momentum, and with 14 minutes on the clock, Cole Gammer slammed home a goal, bringing the score to 3-1 thanks to an assist from senior Jordan Bochinski.

“This team knows how to push each other,” freshman Colin Baird said. “They help me take an opportunity on the ice, and I think I’ve been able to really take them. Growing over the last few games has really developed me.”

As the game continued in the second period, the Flames started connecting passes together and building a rhythm, and with 25 seconds remaining in the period, Laukaitis netted another goal, leaving the Flames with a 4-1 advantage. That kind of consistency from period to period is something the Flames have been searching for.

“We have to dial in on what our goal is,” Baird said. “It’s hard to stay focused for a whole 60 minutes, but we can pull off what we need to when we are doing what we can on and off the ice.”

The third period held disputes and penalties, but that would lead the Flames to two more goals thanks to power-play goals from Bochinski and Baird. Amped up by the crowd as the clock neared 2 a.m.,, a massive brawl broke out in the third period, with senior Garret Nelson and multiple Ohio players getting ejected as fists flew.

But with under three minutes left in the game, Baird received an open shot and took it, Laukaitis and Josh Fricks assisting. Soon after, Josh Fricks scored the Flames eighth goal, giving the Flames their ultimate 8-2 victory over the Bobcats.

“We need to hit the reset button now,” Handy said.  “We have to come back focused and ready to do what we have practiced.”

The Flames played Ohio again on Saturday night for Military Appreciation Night, and although it was another tense game, the Flames headed into overtime to beat the Bobcats once again, 5-4.

“We will do what we always do,” Baird said. “We train for these games, so if we focus and remember we are a team, we’ll do great.”