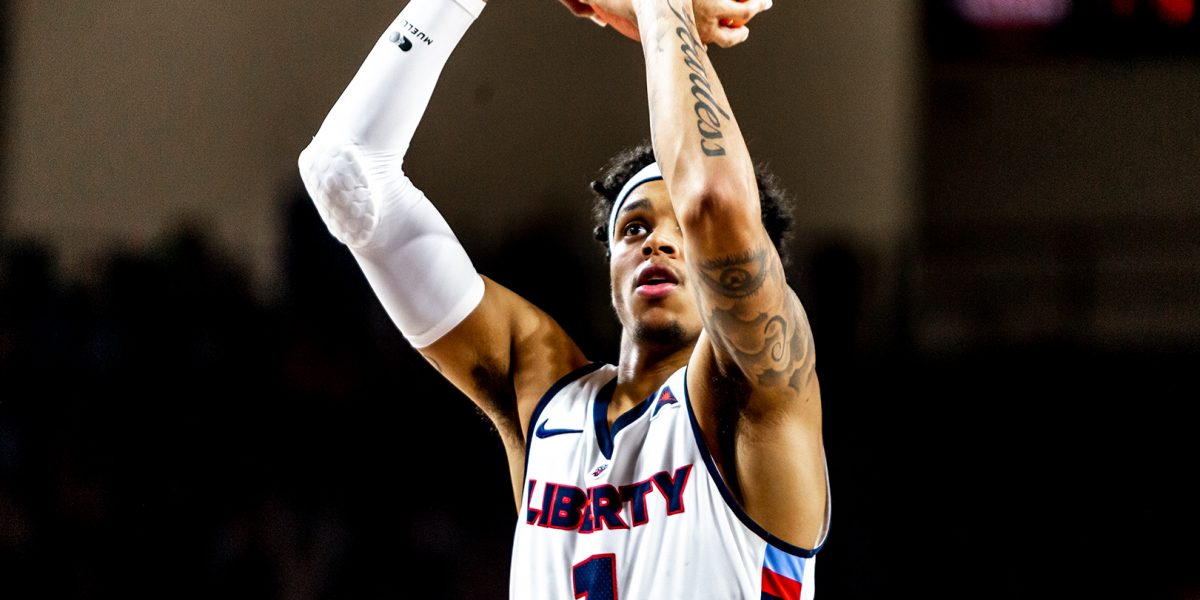 Then senior Scottie James exploded out of the gates for the team’s first 14 points, it seemed as though the Flames would be cruising to an easy victory. He ripped down offensive boards and threw down ferocious dunks as the team built an early lead.

But despite this strong start, Liberty’s offense struggled through the rest of the game as it secured a 66-55 win over the University of Maryland Eastern Shore Sunday, Nov. 10.

“I felt like the visiting team played harder than we did,” Head Coach Ritchie McKay said. “When you come off an opener against a quality opponent in front of 7,800, and everyone’s talking positively about it, you can be seduced into thinking you can give the same effort because you did it the game before. But that’s not reality.”

The first basket by a Liberty player not named James occurred seven minutes into the game when sophomore guard Darius McGhee nailed a 3-pointer. This set the tone for the rest of the half as James cooled off and McGhee caught fire from behind the arc, converting four of his seven tries in the period as Liberty took a 39-27 lead into the half.

“I was just trying to take open shots,” McGhee said. “They did a great job of spacing the floor, and luckily I was the guy open. On offense, we were just making the simple plays.”

James did not score again in the first half, but he continued to produce through rebounding, pulling down nine boards in the period, including four offensive rebounds that led to second-chance points.

“As it went on, they started flooding (the paint) a lot harder,” James said. “So I had to catch, read what (the defense) had and try to skip it across. … It’s not my purpose on the floor just to score the ball. I think I did a good job of sealing (the defense), getting the other guys good shots, and our guards did a great job reading it.”

Senior guard Caleb Homesley usually brings valuable scoring to the team, but during Sunday’s effort, he deferred to distributing the ball to open
shooters.

Homesley did not attempt a shot for the first 17 minutes of the game, instead racking up five assists.

“I love that about him,” Coach McKay said. “Caleb’s an exceptional player with the ability to take over. I didn’t see the energy I’m used to seeing Caleb play with, but he’s such a complete player, it speaks to his humility that he would only take one shot.”

The second half began much as the first ended, with McGhee hitting a 3-pointer. The Flames never faced a serious threat from the Hawks, as James rejoined McGhee in the scoring column with a vicious putback dunk to hold off any comeback attempts.

James finished with 22 points and 16 rebounds, recovering from a three-point, six-rebound performance in Friday’s opener against Radford. McGhee scored 19 points on five-to-nine shooting from beyond the arc.

Liberty now prepares for a quick turnaround with a game against South Carolina State Tuesday night, and will continue to look for ways to improve on their two-game unbeaten start.

“Never accept in victory what you wouldn’t accept in defeat,” McKay said. “We’re a lot better than we played today.”