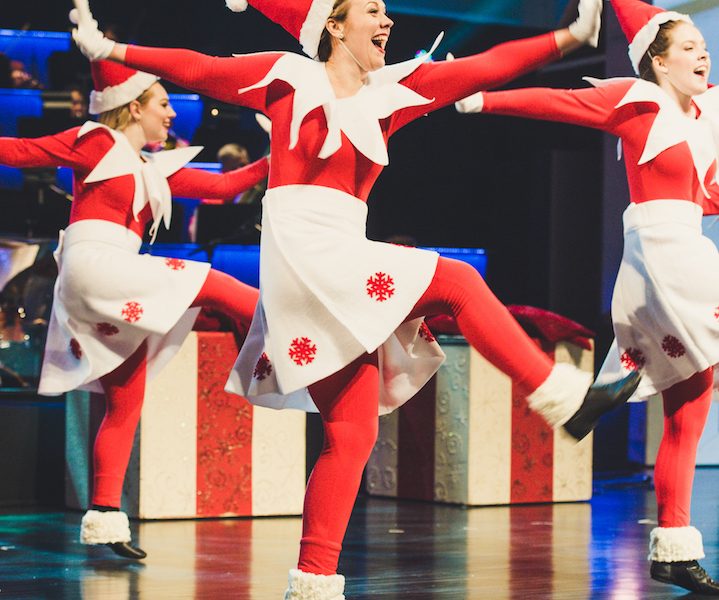 Thousands of lights radiating the message of hope. Hundreds of voices singing in the joy of the season. A story that pulls at the heart and echoes the meaning of the season.

Those are the elements of the Virginia Christmas Spectacular, a nearly 50-year tradition hosted by Thomas Road Baptist Church for the community and beyond.

Denise Thomas is the director of the program and has a first-hand view of what makes the event successful year after year.

“We start the entire process with a meeting in January to pitch stories,” Thomas said. “Then we develop two or three of our favorites and choose one from there for the show. … It’s like a puzzle. It’s a challenge to figure out how we implement
our ideas.”

As one of the main writers, Thomas tries to harness her team’s talent and creativity to address the different elements they want to include.

Thomas’s team begins by refining the story before beginning work on choreography and costumes. Starting in the summer, the team designs the set and creates original music for the program.

Over the years, no two shows have been alike. Sometimes the team writes a story that carries the program, and other years it’s a collection of music and message. The 2019 Spectacular is about a family which owns a toy factory that has been passed down through the generations.

The sets, the choreography, the costumes and the music are tailored to help tell the story, with the cast varying according to the story planned. People of all ages often perform, with Liberty students participating
in the performance in a variety of ways.

“A lot of college students are often involved in things at home and have experience, but don’t necessarily have a theater or music major related to it,” Thomas said. “The Spectacular gives them an opportunity, whether it’s dancing, playing music or even ushering.”

The Lynchburg community turns out every year to attend the show, with over 17,000  in attendance last year. And then there are the tour buses that come from out of state, bringing visitors to celebrate the season.

“Many people consider it a part of their family tradition. While we want to entertain them, we also try to share the love of Jesus with the audience,” Thomas said.

Thomas and her team loves hearing the audience tell about how the Christmas Spectacular affected them.

“We’ve heard a lot of people talk about how the production has positively impacted them or their friends and family,” she said.

Thomas’ favorite part of the entire process – from planning to performance – is working with her talented team to create the story to help share the true spirit of Christmas to the audience.

“Being in on the action from the very beginning and watching what we choose bloom into the full production is amazing,” Thomas said.

Five performances of The Spectacular will be held in the Thomas Road Worship Center Dec. 13-15. Visit trbc.org/vcs for more information.