Only 7% of the aviation field is made up of women. Liberty’s Women in Aviation chapter seeks to raise this percentage 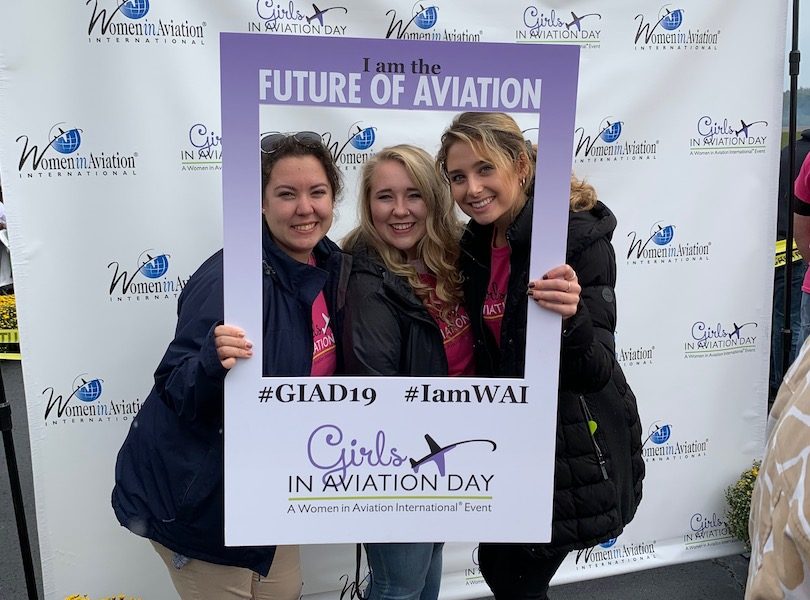 As a young girl, Gretchen Thennes watched her mom work as a flight attendant for United Airlines.

When she was 10, she realized that her dream was to work for an airline like her mom. Instead of being a flight attendant, though, she wanted to be in the cockpit flying the plane. By the time she was a senior in high school, Thennes had completed ground school and began flying.

“I had my heart set on (flying) since I was really young,” Thennes said.

Currently, as a sophomore aviation student, Thennes is club president of the university’s chapter of Women in Aviation.

Part of the club’s mission is to “raise the 7%,” which refers to a statistic that only 7% of individuals working in the aviation field are women. To promote the growth of this percentage, the club participates in annual events like the recent Girls in Aviation Day, which took place Oct. 12 at Culpepper Regional Airport.

For Thennes, this event meant more than just encouraging girls to consider careers in aviation. It meant encouraging them to follow their dreams.

“It’s about telling girls that it’s okay to have your dreams and goals in the aviation industry even though it’s not really a thing (many) girls do,” Thennes said.

Club member and sophomore aviation student Maddie Fulgenzi attended the Girls in Aviation Day event with two other members of the club. Beneath an overcast sky, Fulgenzi and her crew set up a booth among other participants underneath a white tent. Girls ages 6 to 12 entered the tent and wandered around to the different booths, participating in activities like dressing up like a pilot or inspecting a plane engine.

Fulgenzi’s booth featured a helicopter-themed craft that taught girls about aerodynamics. Each of the more than 50 girls who participated at the booth were asked to fill out a dream card, detailing their age and their dreams for the future. Fulgenzi shared that the girls had dreams of pursuing a variety of professions, including anything from becoming a librarian, to a marine biologist to piloting
an F-22.

“Not many of (the girls) were interested in aviation, but it was cool to see how (an) aviation (event) brought this community together,” Fulgenzi said.

Culpepper Regional Airport celebrated its 50th anniversary the same day as the Girls in Aviation Day event. Afterwards, the airport put on an airshow for attendees to enjoy.

Thennes’ first time attending the conference was in March 2019 when it was hosted in Long Beach, California. She was amazed at the opportunities presented by many companies in attendance at the conference, explaining that some students secure internships and even job offers from attending.

Thennes was most encouraged by the example and learning opportunities provided by older women already making strides in the aviation industry. While men and women alike are welcomed at the conference, the event’s primary audience is women.

“It’s so cool to see women who are in the industry pouring into younger women,” Thennes said.

As the aviation program at Liberty continues to grow, Thennes hopes  to create a welcoming community, especially for freshman girls in the aviation department.

“There are so many freshmen, and I think it would be so cool if the upperclassman just pulled the girls under their wing and shared their excitement for aviation,” Thennes said.