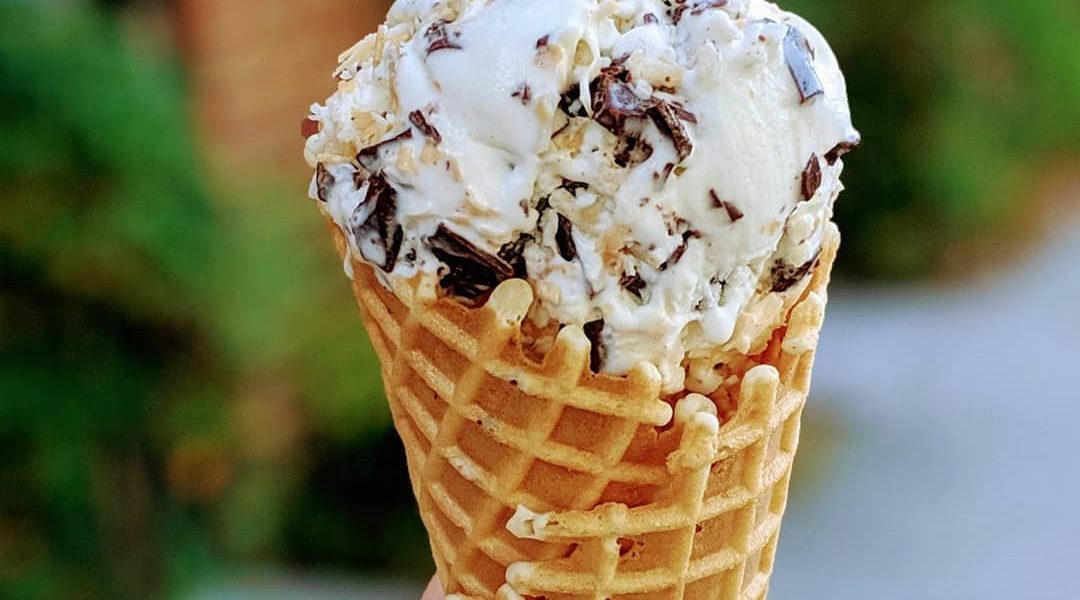 What do Blueberry Goat Cheese Graham, Parmesan Fig Jam and Butterfly Pea Flower all have in common? While they may sound like savory delicacies that belong on a cheese board, they are in fact three flavors of ice cream at the Lynchburg area’s newest family-run ice cream shop: Outside the Cone.

Liberty alumni Kyle and Kim Spangler recently opened their family-run ice cream shop in Wyndhurst, which features unique flavors of homemade, hand-crafted ice cream that have been years in the making.

After opening a shaved ice concession trailer when he was 16, Kyle realized he might want to open a brick-and-mortar ice cream shop one day.

“I bought just about every ice cream book written and read them all cover to cover,” Kyle said. “I started with the recipes in the books and as I got better at understanding the principles of ice cream, I gradually started tweaking the recipes or trying new recipes on my own. Then about two years ago, it kind of dawned on me that I had become good enough to where I could make a recipe that would trump the premium brands in the supermarket.”

Any ice cream connoisseur can find something they love at this up-and-coming shop. With 10 classic flavors, four limited-edition rotating flavors, two vegan/dairy-free flavors, “Moochos” (ice cream nachos), and mix-ins ranging from cookie dough to hand-cut chocolate chunks – everything that Outside the Cone has to offer is mixed in-house.

Another unique feature is called the “Flavor Lab.” This section of the menu features four limited-edition flavors. Butterfly Pea Flower, a blue flower that is grown mainly in Southeast Asia, was recently featured, as well as Caramelized Waffles and Bacon Bark.

Additionally, Kyle has created his own vegan/dairy-free ice cream. By using a “scratch, proprietary recipe” that includes a blend of cashew and coconut milk, he creates a creamier base that tastes like real ice cream. Two flavors are offered – salted caramel and one other flavor that changes every week.

Kyle said his mom came up with the store’s name as a play on words with the commonly-used phrase “outside the box.”

“(It’s) reflective on (our) philosophy of being innovative with flavors and making classic flavors in ways that other shops don’t,” Kyle said.

Outside the Cone is open seven days a week, 12 p.m. – 10 p.m., and is located at 1305 Enterprise Drive, Lynchburg, Virginia 24502. They can also be found on Facebook and Instagram at @outsidethecone.