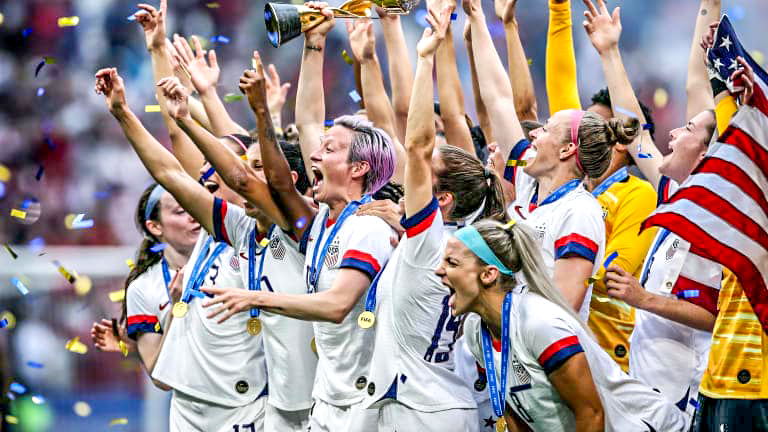 While chants are normally used at sporting events to ridicule opponents and propel a favorite team to victory, some chants transcend what occurs on the field. As the final whistle blew in America’s 2-0 victory over the Netherlands in the World Cup Final, a chant began to resound throughout the stadium that truly embodied the political, cultural and athletic impact of the U.S. Women’s National Team: “Equal pay! Equal pay!”

It will come as no surprise to followers of the national team that the players who openly criticize the White House and promote LGBTQ+ rights are now championing women’s equality in sports. In a lawsuit they filed against their own federation in March, the women have alleged that they receive unequal compensation and inferior benefits when compared to the U.S. men’s team.

To truly understand the issue, a distinction must be made between what is “fair” and what is “equal.” The term “equal” can mean two different things: equal dollar amount or an equal percentage of revenue. The best solution, and the solution that the women are asking for, is a revenue-sharing model, where compensation is determined by the revenue each team generates.

Two problems exist in the United States Soccer Federation that have created this pay inequality. The way the USSF generates revenue does not distinguish between the two teams, which makes it impossible to know which team is worth more. And the two teams are paid with different pay structures, making it hard to compare their compensation on equal terms.

As NPR’s Tom Goldman explained, “Sponsorships are sometimes sold in bundled packages, so it’s difficult to say they go to one team or the other.” One of the popular counterarguments to equal pay is that men’s soccer is far more popular than women’s soccer, so they should be paid more. But that argument is impossible to prove because of the bundled packages, and in some cases has been proven to be false.

According to the Wall Street Journal, from 2016 to 2018, the women generated more ticket revenue for games than the men’s team did in the same time frame. The women generated $50.8 million compared to $49.9 million for the men. As far as sponsorships, Nike has reported that the U.S. women’s jersey is their highest selling soccer jersey in the world for the last year.

The first step of fixing the equal pay problem will be for the Federation to distinguish the revenue generated by both teams and create a percentage that each team is responsible for. But that first step will only lead to change if the teams are willing to accept the same pay scale, rather than negotiate their payments independently.

The men and women’s teams have different players associations, which means that they negotiate their contracts with the Federation separately from each other. Under their current contracts, the men are paid based on bonuses for when they are selected for the national’s team active roster, and those bonuses increase when they win games. The women have much smaller bonuses for being selected to games, but women’s national team players are actually paid a guaranteed base salary of $100,000, and the Federation also subsidizes the national team player’s domestic club salaries in the National Women’s Soccer League. The Federation does not do that for the men who play in Major League Soccer, the largest club league for men in the country.

Many of the arguments surrounding equal pay detail the bonuses and overall compensation of players in the largest tournament, the FIFA World Cup. Unfortunately, the U.S. Federation has very little impact over the bonuses paid by FIFA, which is the international governing body responsible for those decisions. The Los Angeles Times has reported that the 2018 Men’s World Cup generated over $5 billion for FIFA, while the 2019 women’s tournament only generated $131 million.

Based on these statistics, it is clear that America supports women’s soccer exponentially more than the women’s game receives on a global scale. But these issues are not ones that the USSF can address, and FIFA was not named in the player’s lawsuit. All the women’s team can do concerning FIFA is hope that the example of excellence they have set will cause FIFA to commit more resources into growing the Women’s World Cup.

But nationally, the Equal Pay Movement certainly has its place in American soccer and culture, and the way the USSF pays its players is far from perfect.

If the Player’s Associations and the Federation are willing to accept the revenue-sharing method, then the ideal of equal pay will be realized. The more popular and lucrative team will receive more money, but each will be equal to what they generate. For the women, whose athletic dominance has exponentially grown its national brand, this will be the positive step it needs to continue to elevate and grow the women’s soccer game nationally and create a viable model for future worldwide change.