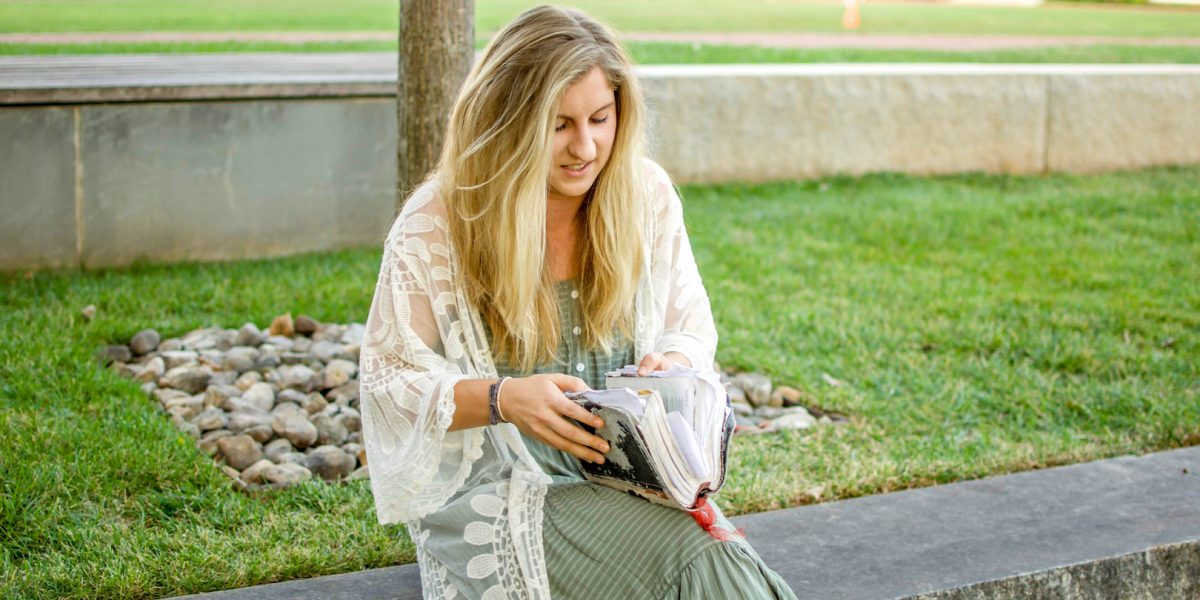 The doctors kept saying the word “cancer.” Twelve-year-old Katie Karp had no idea what it meant, or that her life was about to change.

Katie, now a senior Liberty student and founder of the non-profit Katie’s Kause, was perfectly healthy and the team captain of her lacrosse team when she was diagnosed with a rare, aggressive bone cancer called osteosarcoma on April 27, 2010.

“What I thought was a mild strain from running track and playing lacrosse was actually a tumor rotting away my left thigh bone,” Katie said.

Doctors immediately started her on what would become 18 rounds of chemotherapy at Arnold Palmer Hospital for Children in Orlando. She lost her hair and lost weight as her body became increasingly fragile. Her entire left thigh bone was replaced with a 12-inch titanium rod and was attached to her knee replacement.

Her doctors had doubts that she would ever play sports again. But after she was declared cancer-free on Feb. 3, 2011, Katie was determined to try.

When Katie met a friend named Lucas at the hospital, he was on the other side of his cancer journey. He had the same type of cancer, the same type of treatment and loved lacrosse just as much as Katie did. She remembers the way he lit up the room and how much he made her believe that she would one day play her favorite sport again. A few years later, Lucas relapsed and passed away.

“The last thing I ever told Lucas was to go out there and kick some butt on the lacrosse field for me,”Katie  said. “I (decided) to finish what he started.”

Besides cancer, pushing her body through training after recovery was the most excruciating experience. Halfway through junior year, she ended up on the starting varsity squad playing in the attack position for her team.

“It was just the most incredible experience to play lacrosse again with all my friends who had been with me through cancer and knew how much it meant to me,” Katie said.

Katie’s strength and attitude can be traced through every wave of her cancer story. Her mother Leslie noted that the question, “Why me?” never occurred to Katie.

“I never heard her ask that, not even once … it was like she knew the love of the Lord over her life and she believed in it every step of the way,” Leslie said. “It was just amazing to watch somebody her age have that kind of perspective.”

Although Katie’s endurance was influenced by the support of her family and her faith, little pieces of hope from other cancer patients stirred a power in her. Leslie can still remember the laugh of a young cancer patient named Austin as he ran laps through the hospital with his mother.

After Katie’s battle with cancer, the Karps started Katie’s Kause, a non-profit focused on the little ways that make childhood cancer patients feel seen and loved, as so many did for Katie. Passing on that love was the obvious next step.

“We literally saw kids who were out there battling cancer by themselves,” Leslie said. “Sometimes parents were just fighting to keep their jobs, because those jobs gave them the health insurance that they needed so that (their child) could stay alive.”

Years later, Katie is a senior Christian leadership and church ministry major at Liberty University. As many students around her were searching for their calling, Katie knew she had found hers. The healing that God had granted her gave her a promise she could not help but share with children in the middle of their battles
with cancer.

“I want to minister to other pediatric cancer patients and their families,” Katie said. “I want to say, ‘Hey, look what God did for me – I know he can do this in your life. But let’s walk through this together.’ And that’s this calling that is so heavy on my heart.”

At eight years cancer-free, Katie has had plenty of time to look back on her life. Because of how God used her diagnosis to light a fire in her heart for childhood cancer patients, she has never wished that she had not faced the life-altering news.

“I would not change a single thing about it,” Katie  said. “It is by far the best thing that has ever happened to me, and I can say that in total honesty.”

Katie’s dream is to start a retreat for childhood cancer patients and their families to experience the love and presence of God. But for right now, she never misses a chance to share what God has done so far through her story.

“With these kids, I just want to share with them that they are not ordinary – they are extraordinary,” Katie said. “And God wants to do incredible things through them and through their warrior spirits, because they’re fighters. And they’re so much stronger than they think they are because the Lord is walking alongside them.”

For Katie, achieving a normal life after cancer was never the goal.

“When you’re a child who has battled through cancer, you don’t have to go back to living an ordinary life afterwards,” Katie said. “You get to go back and live an extraordinary life, because you’ve been healed, you have faced one of the (darkest experiences) in life, and God has brought you to the other side of it. And not only has God brought you to the other side of it, but he’s going to blow your mind with what he wants to do with it.”