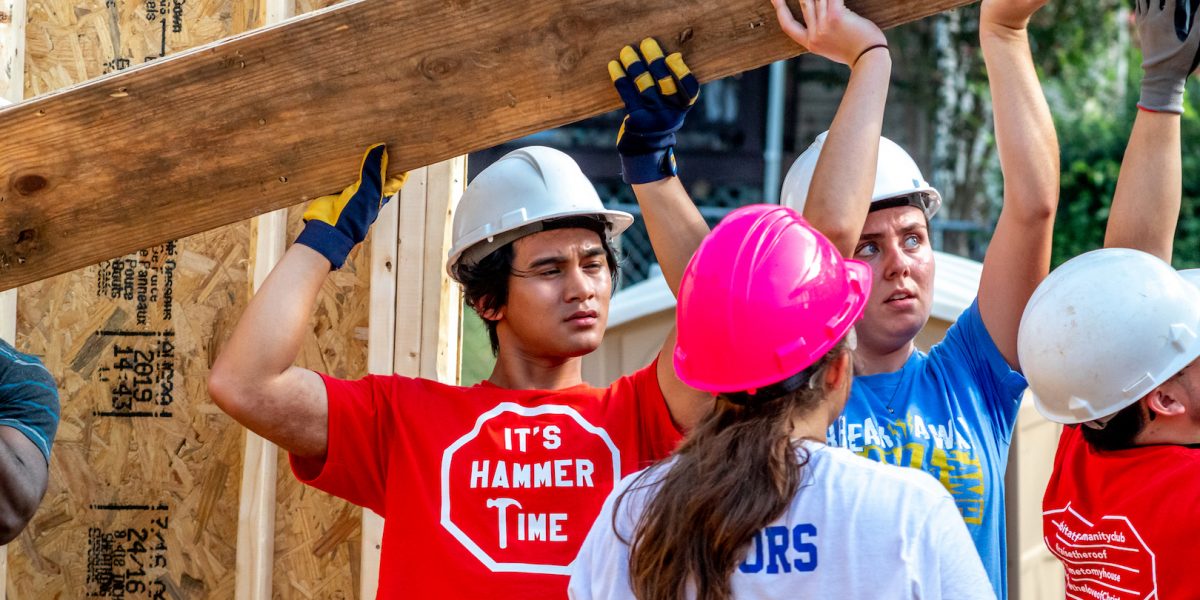 The students came from their morning classes and gathered to help place the supporting structures of a new home. Once the walls were in place, the students busied themselves writing words of encouragement and hope that would soon be covered with drywall and paint. But their prayers would be in the home and in the hearts of the family impacted for as long as it stands.

The Habitat of Humanity club at Liberty University has the opportunity to directly interact with families in desperate need of a place to call home through fundraising and taking part in the construction process.

In August 2018, Liberty’s chapter of the club was one of three other clubs in the United States awarded a $20,000 grant from State Farm. In order to receive the grant, they had to match the amount, so the next few months were full of fundraising.

“God’s been good, giving us that grant,” Alison Pettit, the faculty advisor for the club, said.

The club typically takes two years to raise the money for a project, but the grant has been an “extra blessing” because they are able to start a new build this fall semester.

The Greater Lynchburg Habitat for Humanity selects and determines four families to receive a new home each year. The Habitat club at Liberty raises money to buy the supplies needed to construct the house, and then they build it. Most clubs either raise money or build, but not both, so Liberty has the unique opportunity to be a full sponsor and work directly alongside Habitat for Humanity.

In September, the club started its third build, called “Home for Christmas Build.” They will be working non-stop for the next three months to have the house finished in time for the owner to move in for Christmas. Each week will consist of three different build days, and they will have “blitz” days if they get behind schedule.

The studs for the walls went up in the house Wednesday. Each wall is covered with words of encouragement, hope and love which will be with the house forever. Not only are the student builders getting to bless a family with a home, but they also get to pray with them and encourage them.

Sydney Murray, a junior at Liberty University, is a part of the Interior Design Association and has the opportunity to work alongside the Habitat for Humanity club on campus. She heard about the club in Convocation last year and immediately was interested.

“I love being on the frontlines of seeing it slowly come together,” Murray said.

Murray recently volunteered at a build day. Even though she came in with no experience, she was welcomed with open arms and picked up a hammer and nails to contribute to the project.

“It is a great opportunity to get to tangibly show Christ’s love by serving the Lynchburg community,” Murray said.

Pettit explained how building houses for people impacts their life forever. The workers have the opportunity to bless the homeowner, their children, grandchildren and generations to come.

Habitat for Humanity is open for everyone to serve. Experience is not required. Anyone interested may contact Alison Pettit at adpettit@liberty.edu.