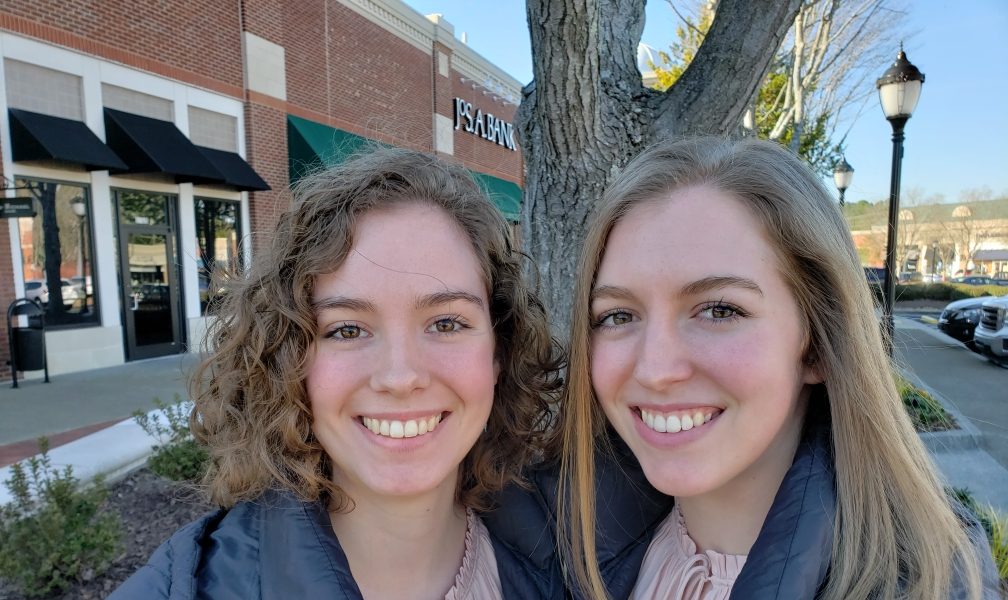 Three sets of twins, united since birth, walk side by side at Liberty University.

Anna and Emillie Tucker are not identical twins, but they live close to identical lives. They dress the same, have the same major, live together and share a birthday. They are the Tucker twins.

“But I would say probably, almost, 90 percent of the time we are referred to as ‘the twins,’” Anna Tucker said.

Anna Tucker is usually the first to wake up in the morning and go to work. Therefore, it is her designated job to choose an outfit, not only for herself, but also for her sister.

“In the morning, I get up, and I put on whatever I feel like wearing that day, and then sometimes I’ll pull something out and lay it on the floor (for Emillie),” Anna Tucker said.

According to Emillie Tucker, she has a very laid-back personality that goes with the flow of life, to which her sister agrees.

“It’s really nice,” Emillie Tucker said. “I wake up in the morning, I look at the floor, there’s something down there and I’m like ‘Perfect, this is what I put on,’ and then I just go.”

Because of the Tucker twins’ decision to match each other, they have received a variety of responses from onlookers.

“They always ask if we know we are matching,” Emillie Tucker said. “They will ask (questions) mostly with our matching because I realize if we didn’t match they probably wouldn’t know we’re twins, which is probably the reason why we do it.”

“So many times we wake up in the morning and end up wearing the same thing,” Marissa Petros said. “We try not to because it’s just the typical twin thing.”

Because they are identical twins, Megan Petros expressed her appreciation for those who call them by their names.

Kyli and Lia Smith are also identical twins. At seven months old, the Smith twins were adopted from Taiwan by an American couple. When they were three years old their family moved to China where they grew up.

Now that the two are at the same university, they not only decided to live in separate rooms but also separate buildings. Even so, their twin connection remains strong.

“There are nights when I can’t sleep and Kyli has texted me in the morning and been like, ‘I was praying for you last night, I know something was wrong, but I don’t know what, if you want to talk about it,’” Lia Smith said. “And so, it’s sort of just like that because I don’t have to tell her what’s going on.”

According to Kyli Smith, not living together has caused some miscommunication, but she admitted that it is hard to lie or keep anything from each other.

Megan and Marissa Petros on the other hand made the decision to live in separate rooms but be right across from each other on the same hall.

“I think next year we’ll be roommates though,” Megan Petros said.

Anna and Emillie Tucker were born September 9, 1998 and have an undeniable connection and love for each other’s companionship. They both described being a twin as having a constant friend by their side and sharing a special connection that is hard for them to explain. The pair is inseparable.

“Even if we were fraternal twins, I feel like that wouldn’t necessarily change our bond,” Lia Smith said. “I feel like it would change other people’s perception of us, which would affect us differently.”

Similarly, the Petros twins expressed that there are pros and cons to being twins but that the pros far outweigh the cons.

“You always have someone to go through life with you,” Marissa Petros said. “But then also there is always that comparison. We’re close enough to where we can talk about it like, that’s ok that you’re better at one thing than I am, so we’ve got a good relationship to deal with that.”

While relationships between twins vary, the Tucker twins openly express their dedication to the relationship.

“We do not fight with each other,” Anna Tucker said. “I can’t think of a time where we’ve really disagreed or had an argument. (Emillie) is really patient and likes to keep things pleasant and happy. So, she probably gives in more to me than I give in to her. But I think we both like to care for each other’s wants or … needs.”

As the Tucker twins look forward to graduation in May, some of their dreams conflict. Anna Tucker currently desires to go to graduate school to pursue a further education, while Emillie Tucker wants to begin writing, publishing and illustrating content for the fantasy fiction books she wants to write.

“Even when I talk about going to grad school, Emillie is like, ‘Ok, well, I can just follow you if you’re there, and I’ll live in an apartment with you,’” Anna Tucker said. “So, I don’t think we have held onto the idea of separating yet.”