Despite several delays throughout the year, construction on Liberty’s campus perseveres 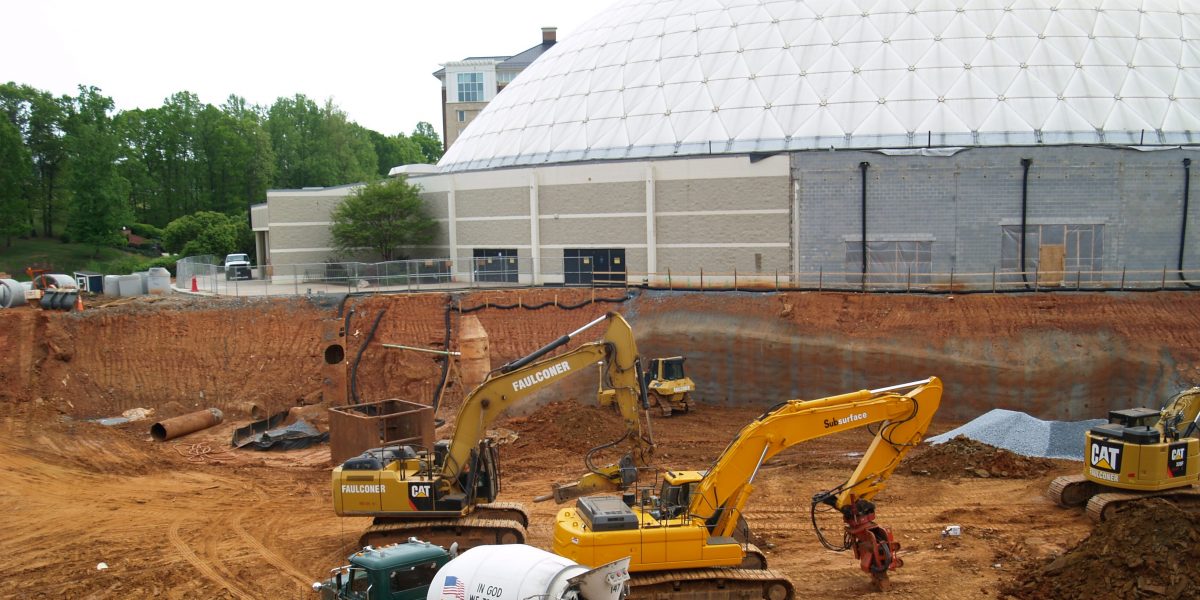 As Commencement approaches and the school year comes to an end, construction teams are still hard at work on the new projects coming to Liberty University.

Vice President of Major Construction Dan Deter said the work is going well, but some unavoidable set-backs have caused some minor delays.

“Liberty Arena has been slow out of the gate,” Deter said. “It’s a great site for the arena. It’s the right spot for the arena. The unfortunate part is a lot of our campus utilities running through this area are very deep.”

Many of the campus utility lines run underneath the site of the new Liberty Basketball Arena. Construction teams have spent the last month and half boring new lines to reroute utilities outside of the new arena footprint.

After the lines have been moved, Deter said construction can begin as planned.

The new School of Business is close to completion, though progress was slowed due to last year’s record rainfall.

“The business school (construction crews) are furiously trying to catch up. The amount of rain we’ve had in the last 18 months is staggering,” Deter said. “We had hoped to get it open for spring term, but Mother Nature literally rained on our parade.”

The inside of the building has been finished for three months, but the exterior work has been hampered by weather for some of the cosmetic pieces, which has delayed the completion.  Nevertheless, the School of Business plans to be open for Commencement and the degree ceremony for the Department of English is currently scheduled to take place there.

Deter said the Hill dorms should be fully open and ready for move-in for the fall semester, though they will not look much like the plans that were shared last spring.

“We came up with some real ambitious, eager, aggressive plans to make seven individual dorms feel like one dorm, and the logistics just didn’t pan out,” Deter said.

Construction on the Hill came to a halt this past fall when heavy rain and unfinished roofs led to leaks and inconvenient living conditions for some students.

However, Deter said he is not turning his back on the Hill dorms. They will be getting new roofs to eliminate leaking problems as well as some “interior enhancements,” though not to the degree previously planned.

“We just couldn’t do it in three months and the Hill dorms are too popular among the students to shut down for an extended period,” Deter said. “And it was very clear this past fall that the students who live in the Hill dorms like living there, and they live there for a reason, and they don’t want to live anywhere else.”

One project Deter is looking forward to is the new School of Engineering building, currently being headed by the school’s new dean Mark Horstemeyer.