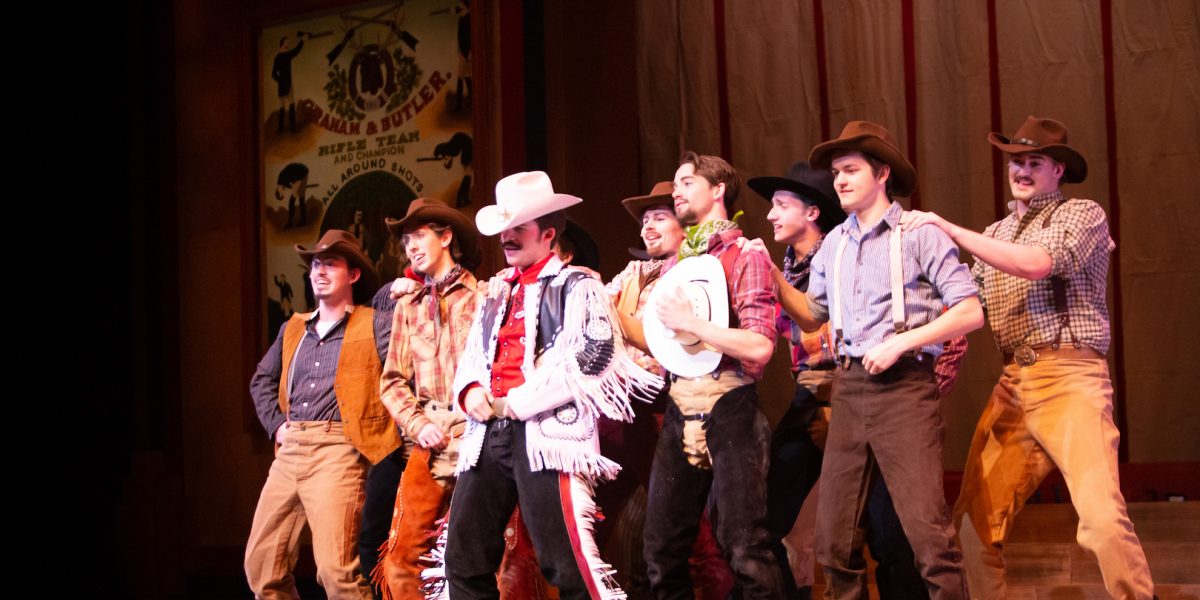 “Annie Get Your Gun” takes the stage for Liberty University’s Department of Theater Arts for the next three weeks as Annie Oakley and Frank Butler shoot, fight and fall in love amidst the rough-and-tumble of “Buffalo Bill” Cody’s Wild West Show.

Irving Berlin’s music exults in heartaches, backaches and sawdust in “There’s No Business Like Showbusiness.” Oakley and Butler outdo each other in “Anything You Can Do I Can Do Better,” and the ensemble blends rich harmonies in lesser-known gems like “Moonshine Lullaby” and “My Defenses Are Down.”

The set, a stage within a stage, includes constantly changing show posters, projections of historic photos, and props and set pieces that roll or fly onstage. The production features 34 cast members in addition to the orchestra and crew.

Student Vincent Sadler, who plays Butler, said all these moving pieces combine with complex dance numbers for a challenging performance.

“Every big song requires so much teamwork because someone’s doing some sort of lift or toss or … splits,” Sadler said. “Without everyone putting their all in, you just don’t get it to work.”

The 1999 revival of this classic musical recounts Annie Oakley’s rise from a backwoods hunter who “can’t get a man with a gun” to a sharpshooter in silk who “shoots the pants off the king of France” during her whirlwind tour of Europe.

The historical Annie Oakley, born Phoebe Mosey, sold game she trapped and shot to support her family until she defeated Butler in a shooting competition at about age 15. She later married Butler, and they eventually died within a month of each other. Oakley taught thousands of women to shoot and spent her fortune on philanthropy.

“No one expected her to be what she was,” Mehl said. “In that time women didn’t do what she did.”

“She never stops the entire show,” Mehl said. “When I’m not onstage I’m changing costumes. … It’s all been a whirlwind.”

“She makes big, funny choices, and then she’s going to have some very sincere moments, too,” Geffken said. “That’s the balance that you’re always trying to strive for.”

Geffken said he enjoyed working with actors to emphasize the humor of the musical, which he hopes will help audiences relax during the end-of-semester rush.

“It’s funnier than a lot of people know,” Geffken said. “(To) get away for a bit and just kind of enjoy a show like this is probably much needed for everybody on campus.”

The show introduces audiences to a stage full of rambunctious, larger-than-life characters who stomp, tap and swing their way through its two and a half hours, hitting the bull’s-eye with a joyful conclusion.

“It’s just a party,” Sadler said. “It’s going to make you smile at one point or another. … (It) fully encapsulates the feeling of going to this rough-and-tumble extravaganza with all manner of folk dancing, juggling and
shooting.”