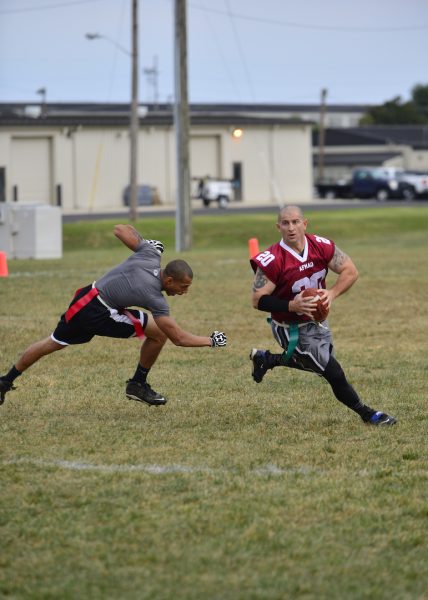 With his fresh, unscuffed cleats and ripped tank-top that is intentionally oversized, Chad “Dynamite” Broseph has always looked like a future NFL legend.

“I mean I’ve always been an athlete, and I know I have the sneaky quickness that it takes to be a pro receiver,” Broseph said.

His pick-up career began in the Fall semester of 2015 when his RA Brock asked if anyone on the dorm wanted to play football on the band field. After already making a name for himself as a third-string tight end for his high school squad, Broseph saw the opportunity to continue his legacy. He rushed to grab the box from Foot Locker that he kept on his desk for everyone to see, laced up the cleats like he had seen his Madden My Player character do countless times, and snatched up his receiving gloves.

“I’ve never run so fast in my life,” Broseph said. “My big break was so close, and I had to prove myself to the girls who I imagined would be watching us play.”

After a couple botched one-handed catches while shouting the name of Cleveland Browns star Odell Beckham Jr., Broseph caught a highlight pass from Broseph and gained 2 yards before tripping on the pristine grass. Broseph cited the unevenness of the field of play and hobbled to the sideline with an injury that took him out of the competition for five seconds. Upon his return to the game, he played lockdown defense by tackling his matchup ­— 130-pound freshman Nicholas Jackson — despite the agreed two-hand-touch play style.

“I just came out to have fun and make friends, and this guy was just hyped up on creatine or something and was trying way too hard,” Jackson said.

Broseph’s well-known style caught the attention of scouts from all 32 NFL teams, and he is on the top of Mel Kiper Jr.’s Big Board for the upcoming draft. The Oakland Raiders are considered the most viable team to take the star wideout, and Raiders Coach Jon Gruden had only positive things to say about the prospect.

“I tell you what, man, that guy’s got a killer instinct,” Gruden said. “I just take a look at him and I see the eye of the tiger, man, and I just start singing the song.”

Chad Broseph will be hosting a draft party on the bottom floor of Commons III on April 25, and he suggests that fans arrive on time because he will likely be either the first or second player taken, depending on what happens with Kyler Murray.