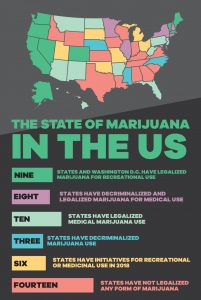 Why marijuana should be legalized

On January 22, Vermont passed legislation legalizing the use of marijuana, becoming the eighth state since 2012 to give a green thumbs-up to Americans enjoying the occasional joint. Though selling pot still remains off limits in the majority of states, passing the law is a step in the right direction.

But it’s a step into uncertainty as well, in light of Attorney General Jeff Session’s newfound war against cannabis. Much to the chagrin of pro-tokers, Sessions recently weeded out Obama-era guidances that essentially allowed states to legalize marijuana with minimal federal interference.

While President Donald Trump stated during campaign interviews with the Washington Post and Bill O’Reilly that he’d leave such matters to the hands of state governments, it’s clear Sessions has a different prerogative. A Senate drug hearing last April witnessed Sessions claim “good people don’t smoke marijuana,” and predict a dystopian America overrun by perpetually stoned citizens whose pastimes would lead to “lives impacted, families broken up, and children damaged.”

Perhaps Sessions should roll up his generalizations and consider whether turning back the time on four years of progress is the best use of his time.  The THC health benefits alone should be convincing for Sessions to change his mind.

According to Harvard Health, cannabis is a natural muscle-relaxant and pain reliever, mitigating a myriad of ailments ranging from multiple sclerosis to fibromyalgia to PTSD in recently-discharged veterans. Cannabinoids have been proven to inhibit the growth of cancer cells as well as tumors.

Borderline-miraculous stories like these are a dime a dozen, with more medical dispensaries popping up in weed friendly states.

Even more convincing for the argument of legalization is economic impact. New Frontier Data’s annual report predicted that the marijuana industry would provide 250,000 jobs as an $11.2 billion industry by 2020.

These numbers, which don’t even factor states that might legalize in the near future, provide hopeful contrast to the Bureau of Labor Statistics’ bleak predictions for the fields of manufacturing, government and utility which are expected to see a combined  loss of 1.2 million jobs over the next six years.

Would America, in the face of all this employment, subsequently continue to appropriate federal funds (estimated in 2012 to be $3.6 billion) to prosecute the hundreds of thousands of inmates tossed in the slammer for simple possession?

On July 20 of last year, citizens of the Commonwealth of Virginia paid $79.28 for every inmate – 127 – incarcerated for possession of marijuana. That’s $10,000 that could have been better spent on Virginia’s education, healthcare or even making Wards Road less of a gridlocked nightmare when 4 p.m. rolls around.

But what about the cost for those caught with marijuana? I myself have a friend who was expelled from his university only a year from graduation for storing his roommate’s stash. That’s nothing compared to Bernard Noble, a trucker and father of seven who is currently serving 13 years for the 2.8 grams of marijuana found in his pocket in 2010, according to reporting from the New York Times.

To make matters even more concerning, this misfortune does not equally affect all races. Despite findings that Caucasians and African-Americans use about the same amount of weed, the ACLU reported in 2013 that black men and women are 3.7 times more likely to be arrested for possession of Marijuana. In one Iowan county, that number jumps to 30 times more likely, suggesting that the only thing the War on Drugs has actually accomplished is providing a catalyst for furthering racial disparity.

I’m in no way advocating for Liberty students to start combing for hashish on Lynchburg’s more questionable streets, as sobriety will always be the best choice.

But classifying weed to be just as sinister as heroin and bath salts is overkill. Heroin has caused over 16,000 deaths since 2000 according to the CDC, and the latter drug was made famous when a Florida man hopped up on bath salts ate his friend’s face off. You know what Schedule 1 drug doesn’t cause overdoses or impromptu cannibalism? Weed.

Why Marijuana Shouldn’t Be Legalized

Changes in marijuana usage policies across the United States of America indicate that the acceptance of marijuana is increasing in society. However, marijuana is not something that should be taken lightly. It has proven to have many undesirable effects on the human body, and this cause alone is enough to prohibit its legalization. Just because marijuana has become more popular in society does not make it safe to use. Many scientific studies have been released that greatly discourage the legalization of marijuana based on its effects on the human body.

For example, marijuana usage can lead to the development of something called marijuana use disorder, which takes the form of addiction in some cases. A recent study by the National Institute of Drug Abuse suggests that 30 percent of people who use marijuana develop some degree of marijuana-use disorder. Because of this, marijuana is, and should continue to be, considered a Schedule I drug.

“Schedule I drugs, substances, or chemicals are defined as drugs with no currently accepted medical use and a high potential for abuse,” the Drug Enforcement Administration included in an article about drug scheduling.

Marijuana’s high potential for abuse should not be overlooked. People who repeatedly use marijuana have reported a number of symptoms. These symptoms include irritability, decreased appetite, cravings, mood and sleep difficulties, restlessness or forms of physical discomfort that last up to two weeks.

Marijuana may also have long-term effects on the brain. The report from the National Institute of Drug abuse studied rats who were exposed to marijuana before birth, soon after birth, or during adolescence showed significant problems with learning and memory tasks later in life. In New Zealand, the Dunedin Multidisciplinary Health and Development Study found in a long-term study that persistent use starting in adolescence was associated with a loss of an average of 6 to 8 IQ points later in life.

Additionally, if marijuana is legalized, it could endanger the people who don’t even use it.

“Marijuana significantly impairs judgement, motor coordination and reaction time, and studies have found a direct relationship between blood THC concentration and impaired driving ability,” the National Institute on Drug Abuse wrote in an article about the effects of marijuana.

It is extremely dangerous for someone to use marijuana and then get behind the wheel of the car – dangerous for them and everyone around them. One of the difficult obstacles that police in states such as California and Colorado are having to overcome is the fact that a reliable way to test THC levels in individuals have not yet be developed. Thus, police are reliant on using roadside sobriety tests and blood tests to determine if an individual is impaired or not.

Additionally, a 2017 report from the Governors’ Highway Safety Association found that there is no evidence of a relation between the concentration of THC in a blood test and the individual’s impairment. Thus, laws banning THC over a certain level are made inconsequential, as some individuals with a legal level may still be impaired, while some individuals can have a higher level of THC and be fine.

Even if there was a rule put in place that would outlaw driving under the influence of marijuana, there would still be those who would make the wrong decision anyway (much like the multitude of DUI cases across the nation).

The application of marijuana in the medical field has been hesitant. This is due to the undesirable side effects and the fact that the popular method of marijuana consumption – smoking – is also very harmful for the body. Like tobacco smoke, marijuana smoke can irritate the throat and lungs and can cause heavy coughing. Some studies have even found that smoking marijuana might increase susceptibility to lung infections. There has, however, been a promising amount of alternative methods that have been developed such as pills and sprays. These medications use purified chemicals derived from or based on the ones found in the marijuana plant. However, there has not yet been enough data to determine the long-term effects that these medications may have on the body.

The fact is that there are still too many unknowns for marijuana to be legalized. What we do know is that marijuana has a high potential for abuse, negative side effects and the potential to inflict future harm and thus it should keep its Schedule 1 drug  classification.