Liberty University proved itself above all the rest as the Freedom Tower, the campus’ newest 275 foot addition, opened for classes, becoming the tallest structure in Lynchburg with an official debut slated for Feb. 5. 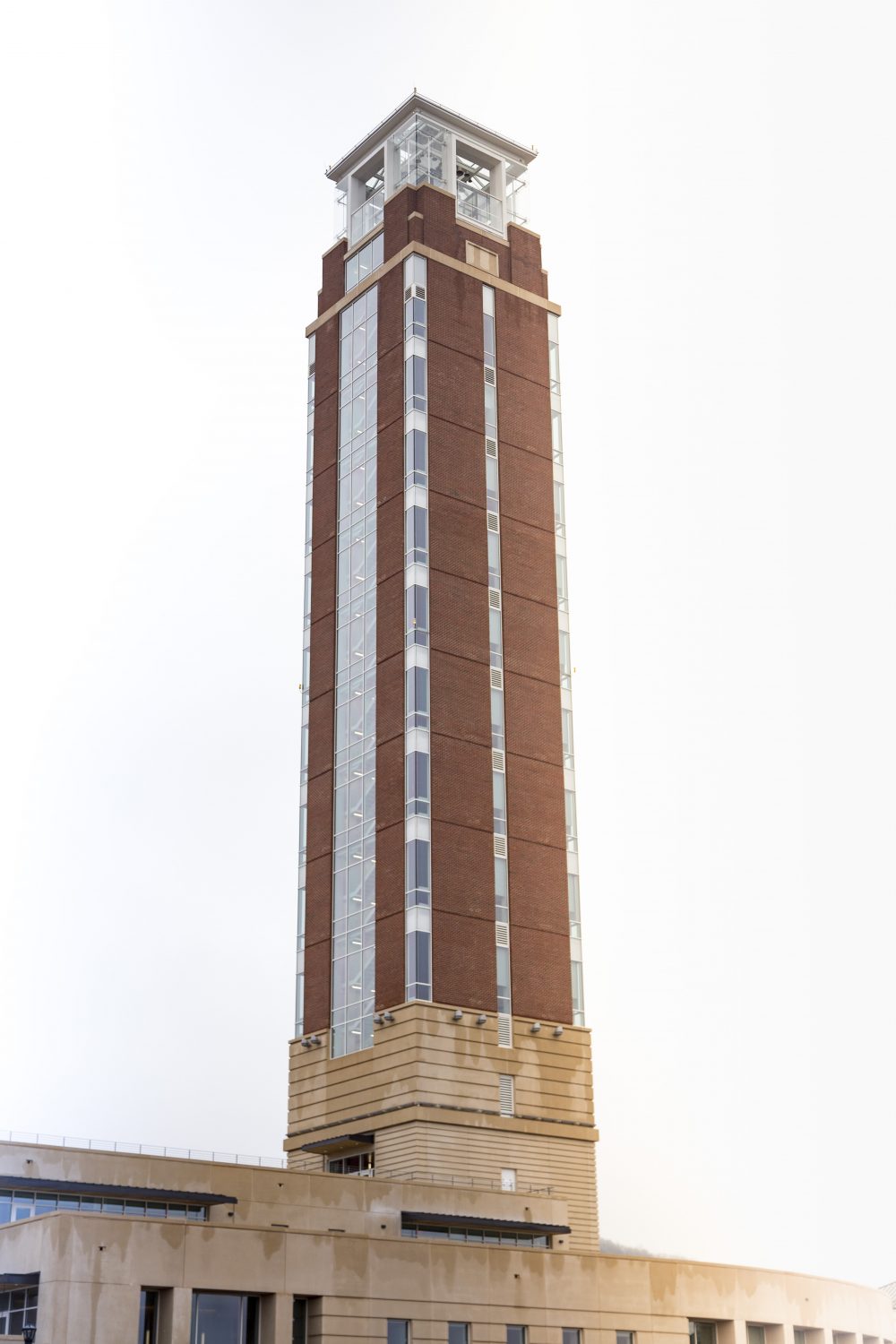 The tower, which took two-and-a-half years to build and suffered numerous setbacks, is distinct not only for its impressive height, but for its state of the art features, like a steel-less structural design and innovative elevator technologies.

The Vice President of Major Construction at Liberty Daniel Deter, who has been working on the project for nearly five years, said the building process has been challenging but rewarding.

“It’s been a long time, and it’s been very exciting to see the vision and see it open up and see the students be able to get to it and start using it,” Deter said. “There have been some bumps in the road, obviously, but there’s a lot of technology in that building and uniqueness to it.”

Studying similar towers at other campuses, like the University of Texas, the team wanted to incorporate a feature not many had — a viewing platform that was open to the public.

“That’s the one thing the president was very clear on,” Deter said. “He wanted a viewing platform up there. Not only could it be the tallest thing in Lynchburg, and a beacon for the students and this landmark, it could also be functional.”

The base also developed over time from when it was first imagined, it was just the bottom of the landmark tower; now, it houses dozens of offices and a contemporarily designed interior.

“We started trying to figure out other uses for it because it is going to be the base, and it is right in the center of the academics,” Deter said.

The initial idea was to relocate the often packed and overrun bookstore to the new venue, but the idea was scrapped, as the parking situation was less than ideal.

With so many different ideas and designs floating around, the final concept of the tower was not set in stone when they broke ground on the project Aug. 31, 2015.

The viewing platform dictated a lot about the construction design, because if there was to be an area big enough to house groups of people, the rest of the tower needed to be wide enough to support that, ending with 40 feet by 40 feet dimensions.

The team decided to give the School of Divinity a new building, bringing them up to speed from the outdated and now demolished Towns Religion Hall.

“It is the most hi tech theological school in the country,” said Dean of the School of Divinity Ed Hindson. “It is great having all of our faculty together for the first time in many years.”

As construction progressed, the team realized the biggest problem was the weather.

“When you’re erecting a tower, you have a crane in the air, and the crane is pulling all the stuff up,” Deter said. “If the wind got above 15 mph, we couldn’t have the crane up there, as it was so tall, and it was dangerous because if that load shifted at all, it could slam into the tower, and that would not be good. We lost a lot of time just due to wind. It could be a beautiful sunny day, and there could be no wind down here, but you go up in the air 200 feet, and the wind profile is much, much different.”

The prestige of being the tallest structure in Lynchburg also came with its fair share of problems.

“The city of Lynchburg doesn’t have a lot of towers, so it was a new kind of a path for them too, and they relied on … our design team to make sure that we were following all the local codes and ordinances,” Deter said.

One obstacle the team faced was the entirely concrete design, which was implemented so that there would be no beams or columns to obstruct the expansive view the tower offers.

“The corners of the tower are glass, so the weight load falls on the concrete walls,” Deter said. “This results in less of a lateral give to the tower as the weight bearing parts of the tower are more abundant than those in a steel-based tower. Reinforced concrete is a much stronger, and it’s an easier material too, especially when you’re going up that tall.”

Another tower issue was the unforeseen Federal Aviation Administration regulations that decided the tower was in a flight path of the airport and aviation school. This resulted in a 6-month review of the project with an FAA consultant.

According to Deter, the concept of the campus Liberty Bell being installed at the top of the tower, along with a carillon of 25 other bells, was implemented on the fly. The gazebo that housed the campus artifact needed to be moved due to construction, regardless. It was almost a natural decision to install the school icon at the top of the landmark tower.

The structure also features an LED light set that is fully programmable. The tower team is working on programming light sequences, featuring holidays, themes or significant campus events, like the Flames scoring a touchdown.

“I see a very bright future for Liberty in every way,” said Hindson.