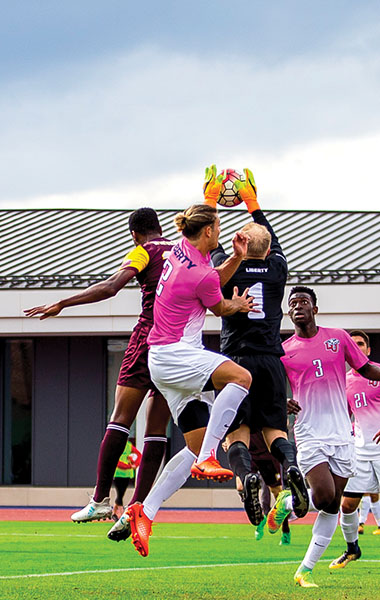 Liberty University Men’s Soccer ended its season with a final record of 10-6 after falling to High Point University 3-1 in the Big South semifinals. They maintained a 5-3 conference record, 7-2 home record and 3-4 away record.

Kevin Mendoza led the season, scoring 10 goals and taking 36 shots and Tresor Mbuyu landed nine shots in the net with 49 attempts all season. James Knoebel completed 61 saves by the end of the season.

Coach Jeff Alder said the team did not meet all their goals, however they were able to learn valuable life lessons that soccer itself could not teach

Alder said Proverbs 22:6, which states “Start children off on the way they should go, and even when they are old they will not turn from it,” is one of the team’s verses. The coaches try to push the guys to grow in their faith and love for people whether they are on or off the field.

“When we talk about Proverbs 22:6, we’re hoping to see growth in individuals and in the team as they learn to first like each other and then learn to love each other,” Alder said. “By the end of the season you saw that, whether they were out collecting cans or on the team bus, practice fields and games, they came together as one and loved each other.”

Alder said he has seen much growth in the players both individually and collectively. He said they are learning to grow from the end of the season and find the joy God provides. His goal is to see the team strengthened in their faith when the time to graduate arrives.

“For us we fell short, we didn’t get a regular season title or a conference championship, but we are inches away, not feet,” Alder said.

Alder said they participated in some difficult games, but they managed to avoid a losing streak for the entire season.

“We had a couple losses but we never had a two-lose game streak the entire year,” Alder said. “It is a sign of our character, our guys are good with the bounce back, it was critical in our success this year.”

Alder said the team plans to make an emphasis of finishing the year with momentum, in the offseason. They will be using this season’s end result to maintain motivation for the spring and summer.

“That disappointment we experienced is the catalyst that is going to continue to drive and grow us as individuals and as a group,” Alder said.

Alder said the team has improved in their motivation and ability to battle during close games.

“I thought this year we matured a little bit in our close games when they were on the line,” Alder said. “We overcame tough moments in critical games.”

Alder said he is proud of the team and he wants the team to grow in their faith and understanding that the Lord is still faithful in his growth for each player.