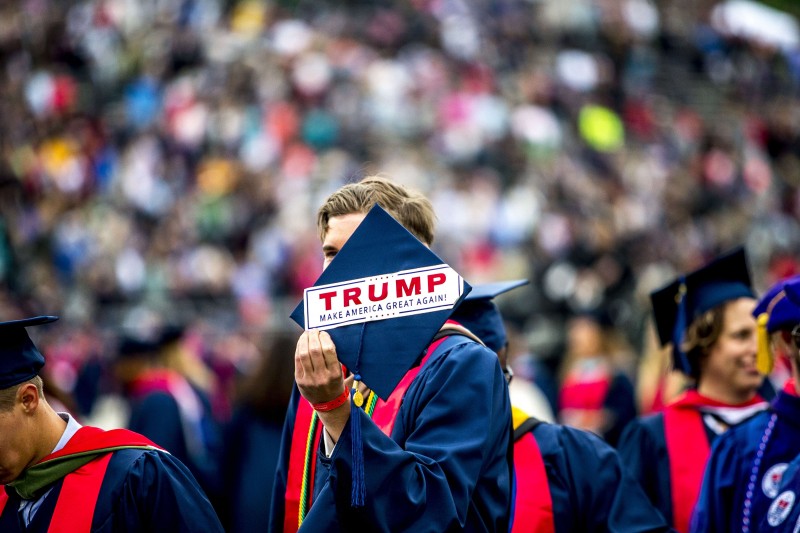 Caps and hats told the tale of Liberty University’s 44th Commencement, with academic caps as a ceremonial aspect of celebrating the over 18,000 students graduating and the speckling of iconic red trucker hats signaling the morning’s speaker, President Donald Trump.

Trump chose to give his first commencement address as president at Liberty, making him the first sitting U.S. president to speak at a Liberty commencement since George H. W. Bush in 1990.

In his introduction of Trump, Falwell said he was proud to call Trump a friend and president who embodies the determination that graduates will need to persevere through the seemingly insurmountable challenges and obstacles they may face.

“Mr. Trump possess the resolve to put his country first and never give up in a world that is increasingly hostile to our values,” Falwell said. 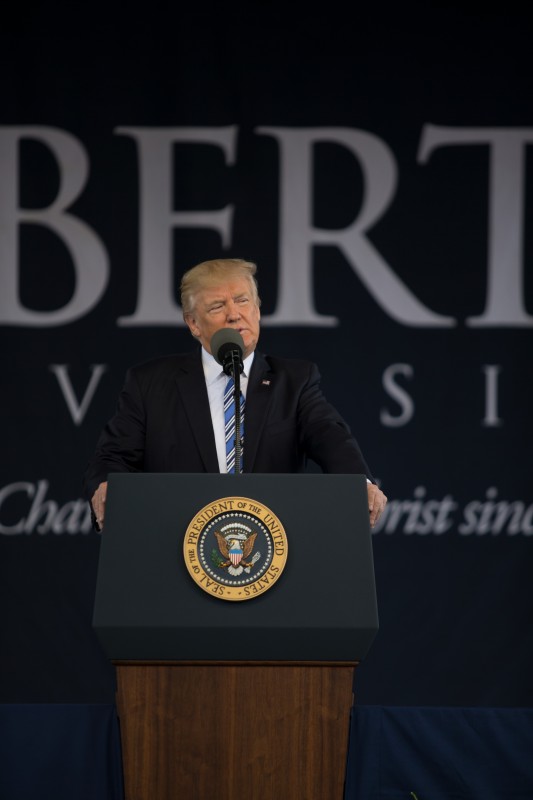 A record crowd of over 50,000 attendees came out to support the graduates and catch a glimpse of President Trump.
Photo by Dean Hinnant

By coming to Liberty, Trump broke the recent tradition of many recent presidents going to Notre Dame for their first commencement speech. Choosing Liberty was the fulfillment of a promise Trump said he made to Liberty University President Jerry Falwell Jr. and that there was also nowhere else in the world he would rather give his first commencement address as president.

A record crowd of 50,000 enthusiastically welcomed Trump and gave several standing ovations throughout Trump’s speech,­­ in which he encouraged graduates to be willing to face critics who lack the courage to do what is right.

“The fact is no one has ever achieved anything significant without a chorus of critics standing on the sidelines explaining why it can’t be done,” Trump said. “Nothing is easier or more pathetic than being a critic, because they’re people that can’t get the job done. But the future belongs to the dreamers, not to the critics. The future belongs to the people who follow their heart no matter what the critics say because they truly believe in their vision.”

Overcoming challenges is something Trump said he had done in his political career, joking that people may have assumed “major help from God” would be needed to not only help some of these students graduate, but for him to become president as well.

When facing this world, Trump said graduates should do what they love and treat the word “impossible” as motivation.

“Relish the opportunity to be an outsider,” Trump said. “Embrace that label — being an outsider is fine, embrace the label — because it’s the outsiders who change the world and who make a real and lasting difference. The more that a broken system tells you that you’re wrong, the more certain you should be that you must keep pushing ahead. You must keep pushing forward.” 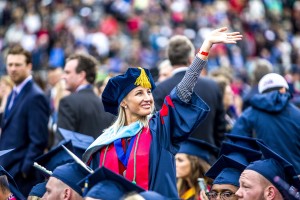 During his speech, Trump recognized George Rogers, Liberty’s retired chief financial officer and vice president who served the university for a quarter of a century. Rogers survived the Bataan Death March, has lived to be 98 years old and was commended by Trump for not quitting and giving into bitterness when he had every reason to do so.

Trump joked that the toughness that Kelly was known for demonstrating on the football field will be needed by Liberty’s football team, as Trump announced the 2018 schedule. The team will face the University of Virginia, Auburn University, Rutgers University, Old Dominion University, Brigham Young University, Army, University of Mississippi, Wake Forest University and others. Trump teased Falwell that he was concerned and may wait four or five years before coming to a game.

While Trump may be waiting a couple of years to come to a football game, those graduating have been working and waiting for years for that moment of receiving their diploma.

One such student was Lorenzo Barr, 42, who is originally from Liberia and currently lives in Dallas. Barr and his wife made the trip from Dallas for Barr to receive his degree in psychology with multiple specializations.

Barr and Trump encouraged others to remember that commencement is to honor not only those who got to walk across the stage, but also all the family, friends and faculty in the stands whose support made that day possible.

During the ceremony, Falwell conferred the degrees of five students who died before they could finish their studies and were represented by five robes draped across empty seats. Those five students posthumously awarded degrees were: Doris Walker, Richard Fortner, Skylar Spencer, Benjamin Worthington, and Timothy Adams.

“I can only imagine how excited he would be if he could see all of this and all of you today, and how proud he would be of his son and of his family,” Trump said.

Logan Price is a news reporter 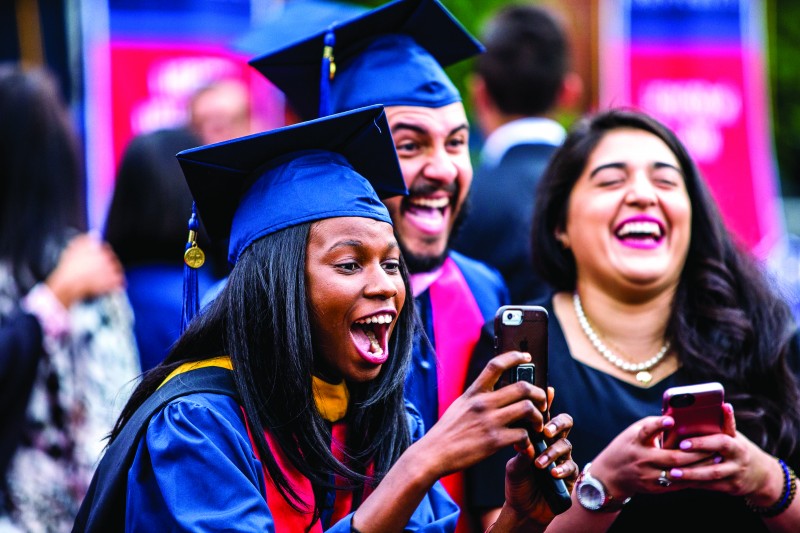 Over 18,000 students graduated from the class of 2017 where President Donald Trump was the keynote speaker. Photo by Dean Hinnant