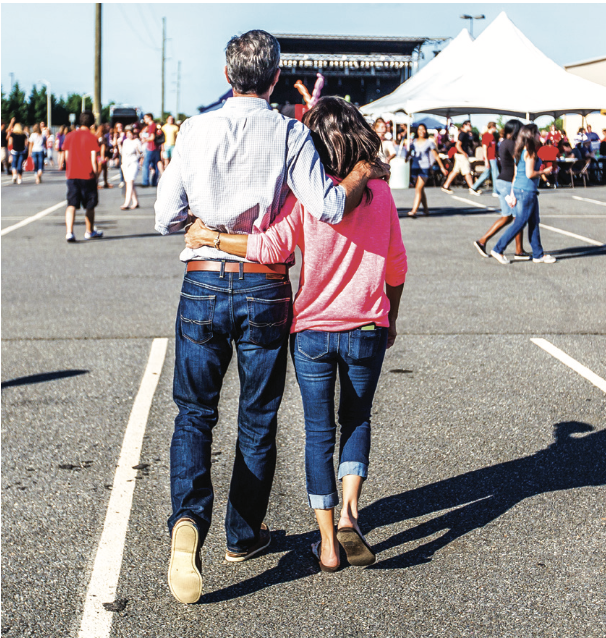 Editor-in-Chief Sarah Rodriguez sits down with Liberty University President Jerry Falwell and his wife,
Becki Falwell, and asks them about the influence of Dr. Jerry Falwell Sr. and the growth of Liberty. 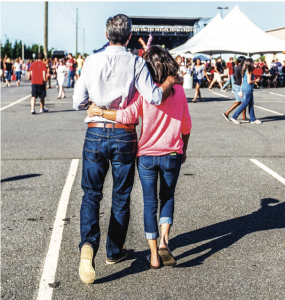 Q: After taking over as president of Liberty University 10 years ago, what was your goal?

President Jerry Falwell: I’d been the lawyer and the behind-the-scenes business manager of the school for years, and so it was a real culture shock for me to go from working in the back office to being up on the stage. It took five or six years for me to get to where I was comfortable. But I really enjoyed, Becki did too, the interaction with the students. We both enjoyed the interaction with the students because I really hadn’t had that before because I’d been the back office legal and business guy.

Becki Falwell: Nobody knew who he was.

President Jerry Falwell: A little bit but not much. But (I had concentrated on) all the financial problems, all the rezoning (and) just the school’s business. I was ready to take over. I’d been trained for 20 years (and) groomed for this position. But the public part of it, there’s no way to practice that. You’ve just got to do it. I’ve gotten where I really enjoy it now, every part of it.

Q: In the past 10 years, enrollment has increased and the campus has expanded. What do you attribute this growth to?

President Jerry Falwell: I think 10 years ago nobody would have dreamed that it would look like it does now and that the finances would go from $100 million in total net assets to now over $2 billion.
Endowment went from almost nothing to $1.4 billion now. Plus, we spent $1 billion on campus. It’s really just become a model for other colleges. The business model is something that “The Chronicle of Higher Education” (highlighted in the article) “How Liberty University became an unexpected model for the future of higher education.” It was just our unique blend of online and resident. The original vision of the college was different than most Christian colleges. For most of them, their vision for the future was to remain small, to offer academic programs that are mainly geared towards students going into ministry. And Liberty’s goal, even when it was small, and (ministry degrees were) pretty much all it offered, the vision was always to become what for evangelical young people what
Notre Dame is for Catholics. And we’ve just marched toward that dream ever since. It just happened a lot faster than I expected.

Q: What was the main thing your father did in running the university that you wanted to
incorporate in your time as president?

President Jerry Falwell: It was the same dream, same vision. An alumnus who was here when I was here, he’s one of our board members now, said, “We all heard your dad say that the university was going to become what it is now, but we believed it, but we really didn’t believe it.” I think (my dad) believed it, but he just didn’t think it would happen so fast. He never gave up on it. I just took that charge and kept workingtowards that original dream.

Q: Just like your father, you are very involved with the student body. Why is that so important to you?

President Jerry Falwell: Well that’s what it’s all about. It’s not only the fun part of it, it also creates sort of a family atmosphere that makes it easier for Liberty to grow without a lot of dissension, without a lot of
different interests pulling a lot of directions. I really love these kids. They’re just unbelievable. People that visit here talk about (how) they can’t believe how friendly (the students) are or how outgoing they are. On most college campuses, if you pass (the students) on the sidewalk, they won’t make eye contact with you, and they’ve got attitude.

Becki Falwell: In the workplace, they make a great impression. We’ve (been) told by many people they can tell when it’s a Liberty student at the hospital (who is helping them), (or a Liberty student serving them) in a restaurant, everything by the demeanor and the smile on their face. When people come around from other colleges and see Jerry (walking) around and see the students react to him and want his picture, they say, “We never knew who our president was. Wenever saw him in person. We certainly never spoke to him on the street.”

Q: Throughout the years, Liberty has been in national news. In the past 10 years, what was the best story that was run about Liberty, and how has that benefited the university?

President Jerry Falwell: That Chronicle story was really good, and also there was a piece by Nick
Anderson in The Washington Post. But the best one I think didn’t get a whole lot of publicity. It was written by Dr. James Koch. He’s president emeritus at ODU, Old Dominion University, and he wrote a piece called “The State of the Commonwealth Report.” It was just released in January. It tells the whole story about
Liberty’s phenomenal growth in the last 10 years.

Q: While living out the legacy of your father, how are you making the position of president of the university your legacy?

President Jerry Falwell: I’m not worried about legacy. My goal is just to fulfill the mission of the school. Whatever people are going to say about me, they’re going to say.

Q: Your father had many iconic sayings like “never quit” and “finish strong.” What sayings of his do you draw strength from? Do you have any sayings that you want to be remembered by?

President Jerry Falwell: I’m not a preacher, so I’m not preaching all the time like he did. That’s the difference between him and me. I’m a lawyer by trade. He’s a pastor by trade. I had a little different focus. For Liberty’s first generation, I think it was better to have someone as a pastor. He was all about being in constant contact with people, with donors, with supporters, just traveling around. That’s the only way you build something like this from scratch. Also, he was a huge risk taker. He borrowed so much money that I don’t know how he talked people into it, but he did it. But a lawyer is trained to be more conservative, and at this point in Liberty’s history I think it’s better to have somebody who’s more conservative. It wouldn’t be good for Liberty to be out borrowing as much as it could borrow and taking big chances. We’ve got so much to lose now. I just think that my style is the same goal, the same vision, but it’s just a different approach. I think that’s what you need when an organization gets into its second generation and gets more stable financially.

Q: What would your father like most about today’s Liberty University?

President Jerry Falwell: He’d love the sports facilities. He’d love everything about the campus (and) the student body, the way they’ve kept the same spirit.

Becki Falwell: The students. (He’d like) that they still have a servant’s heart and they still take mission trips and spend their spring breaks and summers (serving).

President Jerry Falwell: They’ve still kind of got a pioneer spirit which is unusual for a school in its
second generation. The kids still feel like they’re part of something special. A lot of schools lose that over the years and just become another college.

Q: What do you want to accomplish as president of Liberty in the next 10 years?

President Jerry Falwell: The big goal was to move Liberty up to FBS in football. We accomplished that after five years of hard work. Financially, right now we have cash reserves equal to about $100,000 per
resident student. That’s about $1.4 billion. We’d like to get that number up to $250,000 over the next five or six years because at some point most other schools are going to get into online education like we have. I don’t think it will be as easy for us to build reserves once it becomes more competitive, and so the goal is to have that money in reserve. There’s probably already enough to guarantee the success of the resident program in perpetuity, but it would be more comfortable if it was about double what we have now.

Favorite thing to read? (aside from the Bible)

Favorite activity to do in the area?

Dirt biking or four-wheeling on trails

Favorite memory as a student?

“At one point, I just decided (to do my own research) because there were a lot of legalistic people here, really big on rules. My father was not like that at all but, (the legalistic ones said), ‘You weren’t a good Christian if you listened to this kind of music or that kind of music.’ A lot of people here were (saying that), so I just said, ‘You know that can’t be Christianity, all those rules.’ I said, ‘I’m going to read (the Bible). I’m going to forget everything I’ve ever been taught by those folks and I’m going to read what Jesus said.’ And I did, and I was like, ‘Woah, those legalistic people are the ones that Jesus condemned.’ It just opened my eyes and changed everything.”

Favorite story to tell about Liberty?

“I used to ride horses up here before there was anything but a farm. It was just a big farm. I was 12 years old, and I’d come up here and ride horses with the tenants, the ones who took care of the land. They had kids, and I rode with them.”

“When I met with the NCAA in January to make the case that Liberty should move up to FBS, I showed a picture of dad and me standing on the sidelines of the first football game, 1973. I was 10 or 11 years old. I told the NCAA folks about how Liberty didn’t have a campus; the dorms were on an island in the James
River. It was an old youth camp where the football team practiced. We had an old hotel downtown that was also a dormitory. We had rented school buildings, old public schools that were no longer used as public schools for the classrooms and old rickety buses to take the students back and forth.”

“I remember all this as a kid. The bridge to the island was so rickety that the buses had to stop to let the kids walk across, and they’d bring the buses across because the bridge wouldn’t hold a bus full of kids. It had a wooden deck, and it would make a lot of noise when you drove across it. I showed them that picture and said, ‘This shows how committed we’ve been to moving up to the highest level in sports. We had all the team sports before we had a campus.’ That was the point I made to them. That was part of what made them decide to give us a wavier they’ve never given anybody before.”