Dr. Falwell as a father

When Jonathan Falwell was unanimously voted by thousands of Thomas Road Baptist Church (TRBC) members to succeed Dr. Jerry Falwell Sr. as a  senior pastor just weeks after his father’s passing, Jonathan Falwell made the congregation a promise that would have made his father proud: If his new role ever came between him and his family, he would “quit in a minute.” Now 10 years into leading the church, Jonathan Falwell said his promise stems not only from what he learned and saw from his father, but simply because he knows exactly how it feels to be a father’s priority.

“It’s not just that I learned it by watching, I learned it by what I felt – because of how he made me feel,” Jonathan Falwell said. “I knew I was more important to him than all these other things.”

“All these other things” included advising presidents, leading the Moral Majority, building a university, and traveling the world as a keynote speaker. The Falwell children – Jonathan Falwell, Jerry Falwell Jr., and Dr. Jeannie Falwell Rivers – grew up during a time when Falwell Sr.’s ministry was in full swing: Liberty’s founding in 1971 and the Moral Majority’s in 1979, all while maintaining his role as the pastor of TRBC. 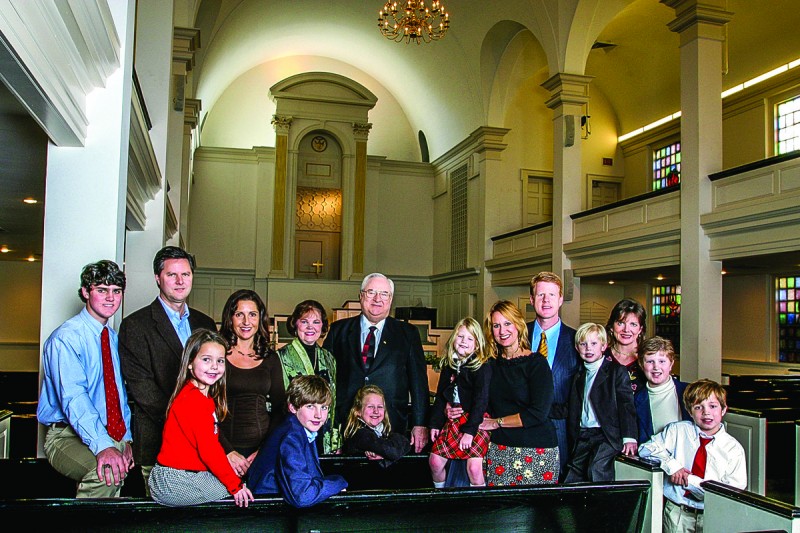 Jerry Falwell Sr. and his wife Macel pose with their children and grandchildren.
Photo by Todd Hunley on Dec. 4, 2005.

But each of the Falwell children said the senior Falwell never used his demanding responsibilities as reasons to miss out on their early years and most important moments. In fact, Rivers said that at a young age, she did not even realize her father was traveling so much because he always made it home at night, the result of a rule he put in place that if he spoke east of the Mississippi, he would come home the same day. On many occasions, he would take the kids with him while traveling.

Jerry Falwell Jr. remembers traveling from city to city in a 1966 Buick, where he would man the tables and sell the preaching albums – a miniature preview of his future role as a business manager of Liberty under his father’s leadership.

The children could not always accompany Falwell Sr. on his long-distance trips, but on one of his trips to Minnesota, a 12-year old Jerry Falwell Jr. was determined to surprise his dad for his 41st birthday. Falwell Sr. recounts in his autobiography “Falwell” that the oldest Falwell child convinced his mother, Macel, to buy him a place ticket, and he ended up stuck in Chicago’s O’Hare airport before the connecting flight to Minneapolis.

“I loved the sense of independence and self-worth the children developed early on, but even during the busiest years I tried to maintain a full, rich, loving life together with my family,” Falwell Sr. wrote in the 1997 autobiography. “We refused to let anything or anyone get between us.”

Even though Falwell Sr.’s ministry made him a frequent traveler, Jonathan Falwell said the family never had to wonder if he would be there when they needed him.

“That’s just something that has stuck with me now as a father myself – the absolute importance of my kids knowing that no matter what, you’re there,” Jonathan Falwell said.

When he was not on the job, Falwell Sr. watched sports, cooked hotdogs on the grill and took the family to get ice cream or to the Peaks of Otter in the Blue Ridge Mountains. Jonathan Falwell recalled how his father would advise presidents during the day and by nighttime would be home watching football with the family.

As a grandfather, he placed the same priority on attending his grandchildren’s important moments as he did to his own children. His daughter-in-law Becki Falwell, wife to Jerry Falwell Jr., remembered how when their son Trey played tennis, Falwell Sr. showed up at every home match – and everyone there knew it.

“Big Jerry would pull right beside that court, and he had that train horn, and if Trey made a good shot, he wold blow the horn,” Becki Falwell said.

“He loved to laugh and have a good time,” Jerry Falwell Jr. said, “He just loved people, and even though he was so busy, he found a way to keep time for his family. It was just very unusual.”

Each of the Falwell children have echoed their father’s level of professional success in their own respective fields, with Jerry Falwell Jr. taking the helm at Liberty, Jonathan Falwell the pastor of TRBC, and Jeannie Falwell Rivers the chief of surgery at the Hunter Holmes McGuire VA Medical Center in Richmond. They all spoke of the importance of their father’s message of perseverance or how he taught that when they set their mind to something and ensured that it aligned with God’s will for their lives, there was nothing they could not do.

When TRBC and his ministry were booming Falwell Sr.’s message was about being the best at what you do. But Jerry Falwell Jr. said his father’s message of, “A man’s greatness is not determined by his talent or his wealth, but rather by what it takes to discourage him,” was developed and lived out during the days of Liberty’s financial struggles. As the Falwell children witnessed their father face struggles and then overcome, they learned to do the same in their own lives.

“One thing that always sticks in my mind because he said it a million times was, ‘Don’t quit.'” Rivers said. “As an adult I realize that more than I did as a child, with a lot of the struggles and difficulties he went though from time to time. He was just the ultimate encourager.”

Jacob Clarke is the managing editor.