Through a series of poor decisions and rushed choices, freshman Liberty University student Chris T.B. King decided to jump on the Norfolk Southern train on the west side of campus yesterday in an effort to escape the Liberty bubble. 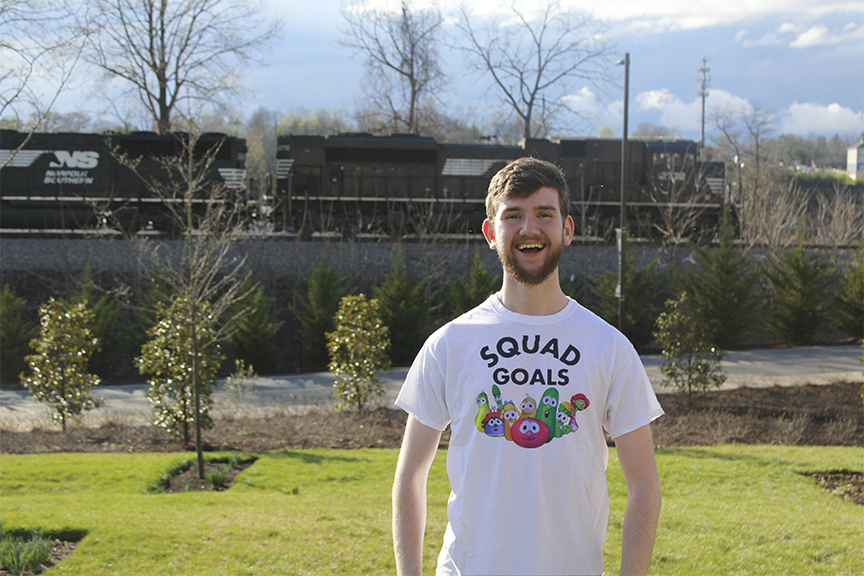 Chris King took an adventure outside of the Liberty bubble.

“I just can’t take it anymore,” King said while waiting for the train wearing a Veggie Tales T-shirt tucked into his jeans. “I need to experience the real world.”

The real world for King ended up being downtown Lynchburg City after he fell off the side of the train from leaning over to adjust his velcro shoes. He was immediately immersed in a culture that his homeschool lessons did not prepare him for.

“My mom once told me I should stay away from all of the hipsters here, but I still don’t know what a hipster is,” King said.

Complaining that his “tummy was a-rumbling,” King went looking for food. He stopped at a nearby restaurant, and — like any other Liberty student would do without second thought — immediately put down his phone, wallet and keys at the closest table to save his seat.

Lacking a sufficient amount of common sense, the 18-year-old was both surprised and horrified to find that not only did a middle-aged man take his seat, but that all of his possessions were gone. When he asked where his stuff had gone off to, the man said there was nothing on the seat when he sat down and someone probably stole his stuff.

“That’s impossible,” King said in response. “Stealing is a sin.”

Walking away from the restaurant with a sorrowful demeanor and no money or cellular device, the distraught student started up the street until he passed by the local record shop. Intrigued, King went inside to find a large display of vinyl records and cassettes stacked on the wall.

Looking through the stacks of records, though, King noticed the store did not have anything from Lynchburg-rap sensation Humble Tip. When asked, the store clerk said he did not know what a humble tip was, but he did have Future’s newest music on vinyl.

Remembering that Future was once brought up in Convocation, King decided to give it a try and placed the LP record on the store’s record player.

“I was confused about his testimony because he never talked about Jesus,” King said after listening to the song ‘Testify.’ “Or maybe ‘shawty’ actually means Jesus in a foreign language. I’m still not totally sure.”

Still a little bewildered about the music, King stepped outside the shop, but suddenly froze in the doorway. With an intense and longing gaze, he stared down at the feet of the woman in front of him. Never before had he seen such a thing – a female’s bare ankles in broad daylight.

“What’s next?” King said, still shocked at what he just saw. “Are women just going to start exposing their shoulders now too?”

With the firm belief that America has lost all of its Christian values, King decided it was best to return to the safe haven of Liberty’s campus as soon as possible and never leave again.

“I’m going to tell my community group leader to pray that Lynchburg gets saved when he asks for prayer requests tonight,” King said. “I don’t know why anyone would ever want to leave the Liberty bubble.”