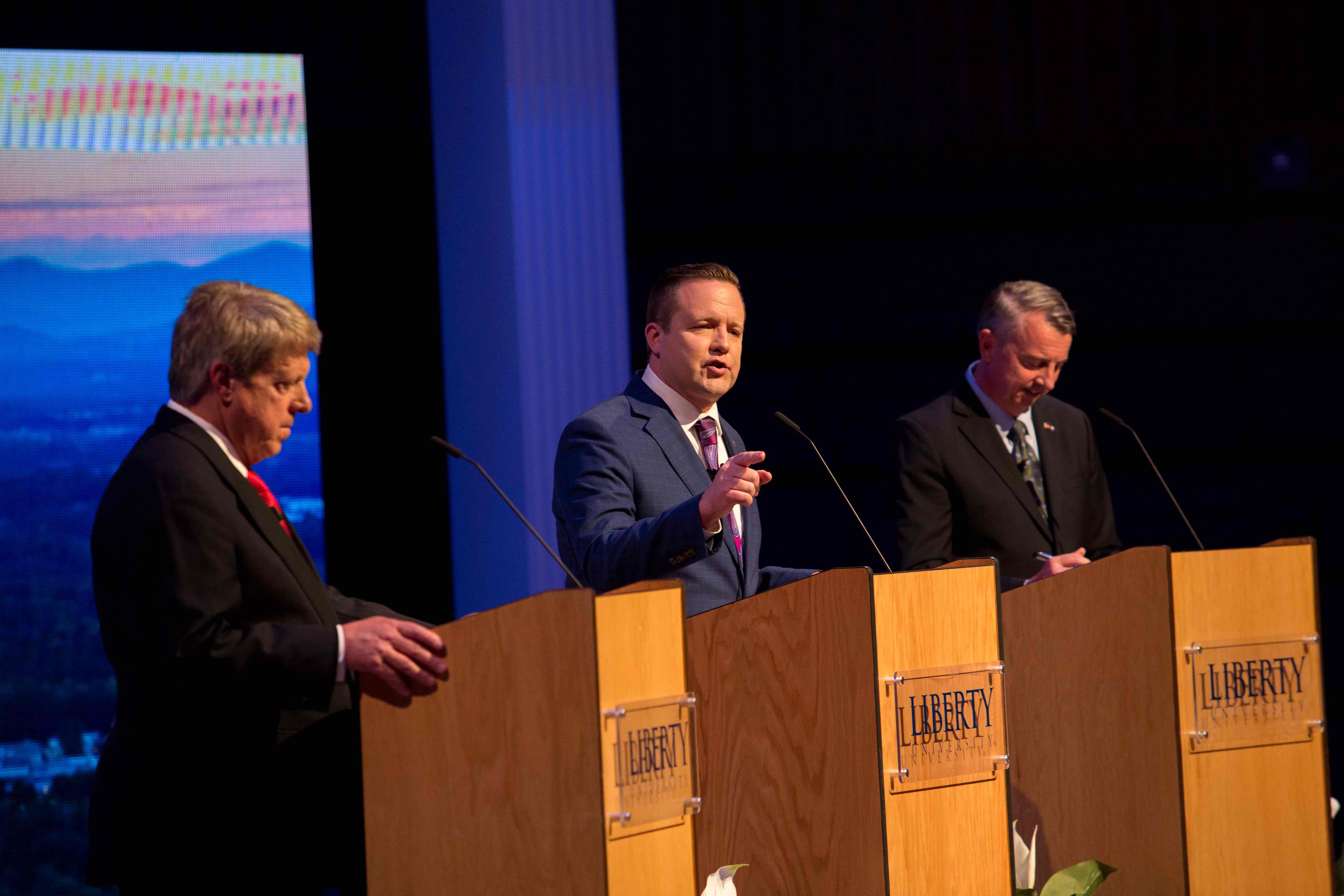 Throughout the debate, Prince William County Board of Supervisors Chairman Corey Stewart attacked fellow candidate and former RNC Chairman Ed Gillespie, portraying him as a pro-establishment politician due to his ties to big business and lobbying groups. 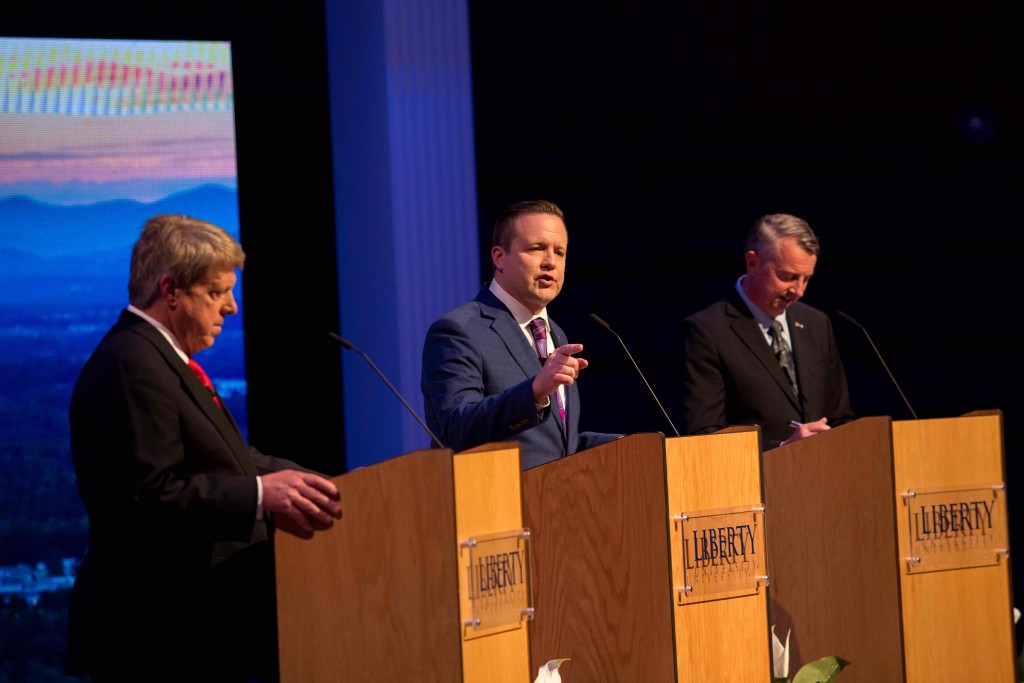 Stewart — who led President Donald Trump’s campaign in Virginia and whose ideas on policy strongly resemble those of Trump — specifically accused Gillespie of pushing for amnesty of 12 million illegal immigrants, siding with corrupt corporations over small businesses, and refusing to cut any government spending or taxes.

“Gillespie avoids all controversy,” Stewart said in a post-debate press conference. “He will not stand up for any conservative issue. Not one.”

According to PolitiFact.com, Stewart was correct in asserting that Gillespie supported legislation in 2013 that gave a pathway to citizenship for approximately 12 million illegal immigrants. Gillespie, too, has raised more than $1.9 million for his campaign — more than double of what Stewart has raised — through mostly large Super PACs and Fortune 500 companies.

Gillespie’s proposed tax plan, though, does call for a 10-percent across-the-border tax that is dependent on an expected influx of state revenue of approximately $3.4 billion. Stewart claimed in the debate the expected increase in revenue would not come, which in turn disassembles Gillespie’s tax plan.

Gillespie chose to hold off on rebutting many of the accusations laid against him from Stewart and State Senator Frank Wagner, the third candidate for governor, though Gillespie mentioned several times to check his website for facts about his platform and urged the audience to google “Corey Stewart lies.”

Instead of attacking his fellow Republican candidates on stage, Gillespie decided to spend time in the debate distancing himself from Democratic gubernatorial candidates Ralph Northam and Tom Perriello.

Gillepsie reprimanded the policy of the Democratic candidates twice in the debate — once for their embrace of sanctuary cities and another time for their support for the EPA’s Clean Power Plan — whereas Stewart and Wagner chose to focus their attacks on Gillespie alone, sometimes siding with each other.

Aside from throwing accusations, the candidates had few things to disagree upon. All three candidates expressed their wholehearted support of the second amendment’s right to bear arms, said Medicaid needs to be reformed, and argued that illegal immigration is endangering the safety of the Virginia people.

The three candidates did have certain issues they focused on more often than the others. Stewart, for example, kept to his hardline conservative rhetoric while proudly waving the banner of “the most controversial candidate.”

“You’ve got to re-do the system,” Stewart said in the post-debate press conference. “Medicaid was designed in the 1960s, and it is a rotten system that spends way too much money on red tape and bureaucracy and not enough on patient care.”

Gillespie, on the other hand, bolstered his plan for job growth above all. When asked how to solve problems of infrastructure, energy resource depletion and a weakening economy, Gillespie continually went back to job growth as the solution.

“We have got to get jobs growing again in the Commonwealth of Virginia,” Gillespie said during the debate. “My tax plan, when fully implemented, would result in the creation of over 53,000 good-paying, full-time, private sector jobs all across Virginia.”

Gillespie, in his fight to create job growth, also said during the debate that Virginia must diversify its economy with small businesses and jobs in cybersecurity rather than relying on federal jobs in Northern Virginia and coal mining jobs in Southwest Virginia.

Wagner chose to focus on his 25-year career as a state politician in the Virginia General Assembly. The longtime businessman also boasted of his experience in the manufacturing industry, declaring he had more experience with fighting burdensome government regulations and high tax rates than either of the other candidates.

Wagner consistently emphasized the importance of providing access to broadband internet to small businesses and reviving Virginia’s “rainy day fund,” a commonly-used term for the stash of money Virginia’s state government saves to use only in times of recession or economic decline.

Current Virginia Governor Terry McAulliffe has recently chosen to use some money to shrink Virginia’s budget deficit of $1.5 billion, drawing backlash from Wagner and other state conservatives alike.

“Those plans that you just heard (from Gillespie) are going to jeopardize our Triple-A bond rating and are going to ensure the rainy day fund is not there when a recession finally hits,” Wagner said in his closing statement. “It assures that we don’t address liabilities that will haunt our children and grandchildren.”

Other topics discussed during the debate include infrastructure, gun control and business regulations.

Gillespie also has the backing of many political elites within Virginia including Bob Goodlatte, Lynchburg’s representative for the House of Representatives, and former Virginia Gov. Bob McDonnell.

The debate was moderated by Liberty’s President for External Affairs Len Stevens and WSET-13 News Anchor Mark Spain, who took turns asking questions to the candidates while keeping the audience’s cheering at bay during the speeches.

The debate also served as the kickoff event for the new Liberty Center for Law & Government, a cohort between Liberty’s School of Law and Helms School of Government. The event lasted for one hour, and a reception was held after the debate in honor of Thomas Jefferson’s 274th birthday. It was Liberty’s first televised debate in the school’s history.