Grammy award winning artist Chance the Rapper will be attending Convocation at Liberty University this upcoming fall. According to a source from Mr. the Rapper’s camp, the Chicago native is headed to Lynchburg not only to speak but to announce a major detail involving his album slated for a 2018 release. After an interview with him, the truth regarding his next project was revealed. 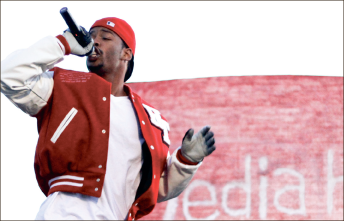 Humble Tip will collaborate with Chance the Rapper on his new album. Photo Credit: Kale Gordon

“After hearing straight bangers such as ‘S.P.F.’ and ‘This is Liberty,’ there is no way I can drop my first ever album unless Jason Lewis is on it with me,” Chance said.

Lewis, known by many as “Humble Tip,” is a Christian rapper who works as a recruiter for Liberty, using his music to preach the gospel while getting people “turnt” for Liberty.

When asked why he desired to collaborate with the man known T(o) I(ncrease) P(raise), Chance pointed out the many parallels between the two artists, citing the similarities as his reason why.

“Man for one, we both rappers,” Chance said. “It’s in my name. Second, we both have at least one song about God on our last project. Third, we are two of the hottest rappers on the scene right now. I know I got my Grammy. But just wait, (Humble) Tip’s is coming soon.”

“This album is gonna be hot,” Lewis said. “I’m talking 500 degrees hot. Speaking of degrees, did you know Liberty University provides a variety of high-quality educational opportunities for students in all walks of life? We were founded in 1971 by the late great Dr. Jerry Falwell Sr. on Liberty Mountain.”

Chance said he anticipates working with the relentless Liberty recruiter.

“After I heard ‘This is Liberty,’ I literally pulled up an application and stared at it for a solid hour,” Chance said. “My man Humble Tip almost had me apply. I respect that.”