Christmas on the Boulevard 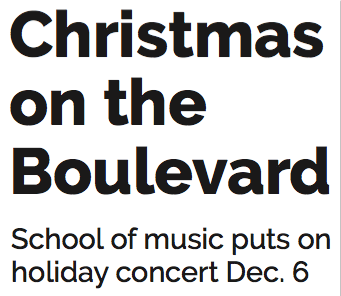 Christmas on the Boulevard, an annual Liberty University musical tradition, will have its largest performance yet Dec. 6 at the newly-built Concert Hall. With 359 choir members participating, this event is the biggest production the school of music has done.

The new Concert Hall has the capacity to hold up to 1,600 people, which is a big step from the Towns Auditorium where the event was held last year.

Though the concert’s partici- pants are exclusively faculty or students from Liberty, the concert is open to the public.

Ticket prices are $5 for general public and $1 for students with a valid Liberty ID. Doors will open at 7 p.m., and the show will begin at 7:30 p.m.

Carver said the production is a great way for students and staff to enjoy the holidays through music.

All of Liberty’s choirs and ensembles participate in the event, including wor- ship and performance choirs, as well as LU Praise.

As Liberty’s campus eases into the holiday season with lit-up Christmas trees and displays, this event furthers the Christmas spirit.

Not only does it celebrate Christmas, but it is a worship-filled night that puts an emphasis on Christ in Christmas.

“I think it’s one of the most exciting, most culturally and spiritually enriching programs that we have throughout the course of the year,” Vernon Whaley, dean of the school of music, said.

According to John Kinchen III, the associate dean for the Center for Music & Worship, the event simultaneously serves as a way to share Christmas through the arts and a way to open Liberty’s doors to the Lynchburg community.

“Our real goal and mission is to be able to have a yearly event that encourages our faculty, encourages our students, that reaches to the community and says, ‘Hey, Christmas is important,’ and we believe that this is something we can all rally around and enjoy the yearly festivities of Christmas,” Kinchen said.

The production is divided into two parts: a more traditional performance in the first part that includes Handel’s Messiah, and a more contemporary second part. Typically, in the second portion, Christmas favorites are sung and the audience is encouraged to participate.

Kinchen said that the event is a “tandem” that blends together both historical and modern music to create a “great” holiday performance.

Tickets for the event can be purchased by calling 434- 582-SEAT or by visiting the LU Ticket Office webpage.

PALUMBO is a feature reporter.