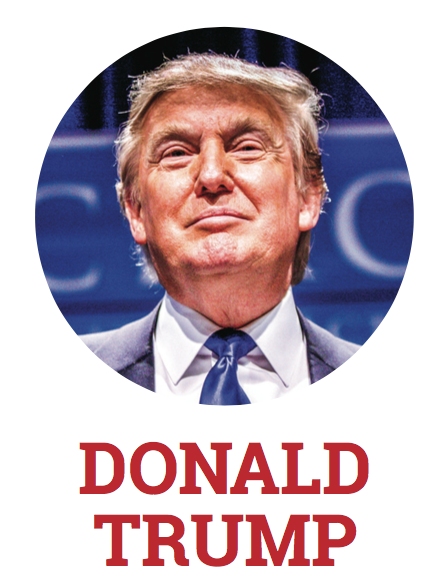 Every great leader has his or her flaws.

For King David, it was Bathsheba, and President’s Franklin Delano Roosevelt and John F. Kennedy had similar problems with lust and extramarital affairs.

However, each of these leaders brought their countries through difficult times, including the unification of the tribes of Israel, World War II and the Cold War.

Donald Trump is by no means a perfect candidate, and I would not choose him as a moral role model.

He is, however, the candidate who is best suited and prepared to redirect America’s current course.

The Supreme Court has been one of the most talked about and politicized issues of this election and rightly so.

The court has taken to personally amending the Constitution, adding the right to an abortion and same-sex marriage.

In the case of Obergefell v. Hodge, which legalized same-sex marriage, Justice Antonin Scalia dissented, writing, “They have discovered in the Fourteenth Amendment a right that was overlooked by every person alive at the time of ratification and almost everyone else in the time since.”

It is imperative that Scalia’s seat be filled by a justice who will recognize the authority of the Constitution and defend it rather than bend it to their will.

All of the individuals on Trump’s list of potential nominees hold to conservative values and the authority of the Constitution, particularly in the areas of First and Second Amendment rights.

Also, this is not a list of Trump’s supporters, as with past presidents.

Instead, quite a few of them have been vocally critical of his campaign.

Other efforts to uphold the Constitution include a desire to see power returned to state and local governments, thus shrinking the federal bureaucracy.

Some of the ways he intends to do this were outlined in his “Gettysburg Address” Oct. 22.

The primary means outlined involved cutting back on government regulations and programs, which have played a large role in the out-of-control budget.

On cutting back the number of federal regulations,Trump said, “For every new regulation, two existing must go.”

While that may seem drastic, civil-liberties lawyer Harvey Silverglate estimates that the average American unknowingly commits an average of three felonies per day.

One part of the problem is the constantly changing regulations enforced by government agencies.

Every day, a 100-200 page book is dropped off in every congressman’s office detailing the new regulations going into effect that day.

It is impossible for our representatives to keep track of the current regulations, so what hope does a law-abiding citizen have of abiding by the law?

Trump also aims to end federal intervention in education by giving control over schools and their curriculums back to the states and local communities.

Common Core’s curriculum has failed current grade school students, as the graduating class of 2016 saw Common Core implemented when they were in sixth grade.

However, the National Assessment of Educational Progress found only 37 percent of them to be ready for college.

Trump has promised to push for legislation to repeal Common Core and end the one-size-fits-all approach of federal government intervention.

Then there is the Obamacare nightmare.

As providers are fleeing the marketplaces and premiums are skyrocketing, healthcare.gov has revealed that one third of the counties in America will have only one insurance provider this year, and in Arizona, premiums are increasing 116 percent.

Trump has proposed a solution that will eliminate the county-by-county, state-by-state marketplaces in order to promote competition, driving premiums down and benefits up.

Trump may not be the moral leader that many of us had hoped for at the start of this election, but neither are any of the other candidates.

Putting aside personal feelings about his behavior, Trump is the policy leader needed to reestablish the authority of the Constitution and make America great again.

Elizabeth lapp is a journalism major.