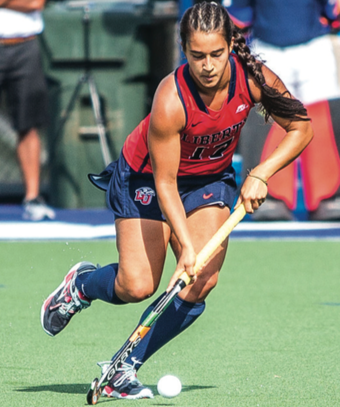 Freshman already a leader on team

Liberty University freshman field hockey player Agueda Moroni is having an incredible year for the Lady Flames. This matches the remarkable journey that brought her to Liberty in the first place.

Moroni scored three goals in the first 17 minutes of the Lady Flames’ Oct. 28 game against Temple, helping them to a 7-0 victory. Her performance set a program record for the fastest time for a player to record a hat trick in a game.

Moroni has scored eight goals in her last eight matches for the Lady Flames.  That gives Moroni 10 goals thus far on the season.

Moroni’s season is even more improbable when you consider that she has only been in the United States since January.

“I saw that there was this school in America that played field hockey,” Moroni said.  “I emailed the coach, and she responded within a day.”

A few months after that initial contact with Liberty Head Coach Jodi Murphy in September 2015, Moroni made the transition to living in the United States in January 2016 in order to play field hockey at Liberty.

Moroni said the relationships with her teammates helped create a smooth transition to life at Liberty.

“It wasn’t really a difficult transition,” Moroni said.  “I loved the team atmosphere. They made it easy for me to adjust.”

“When I played in Argentina, we took school online and practiced only twice a week,” Moroni said.  “Here we practice a lot more, and we are able to build more relationships as a team.”

Moroni said that although she is proud of the way that she has played so far, she still has room for improvement.

“I need to keep working on my individual defense and conditioning,” Moroni said.

Moroni said that she loves the atmosphere at Liberty.

“I feel like everyone here trusts God so much and has so much faith in him,” Moroni said. “People don’t think negatively because they put their hope in God.”

Moroni and the Lady Flames defeated the Providence Friars 1-0 Friday, Nov. 4 in the semifinal round of the Big East Field Hockey Championship to advance to the championship game.