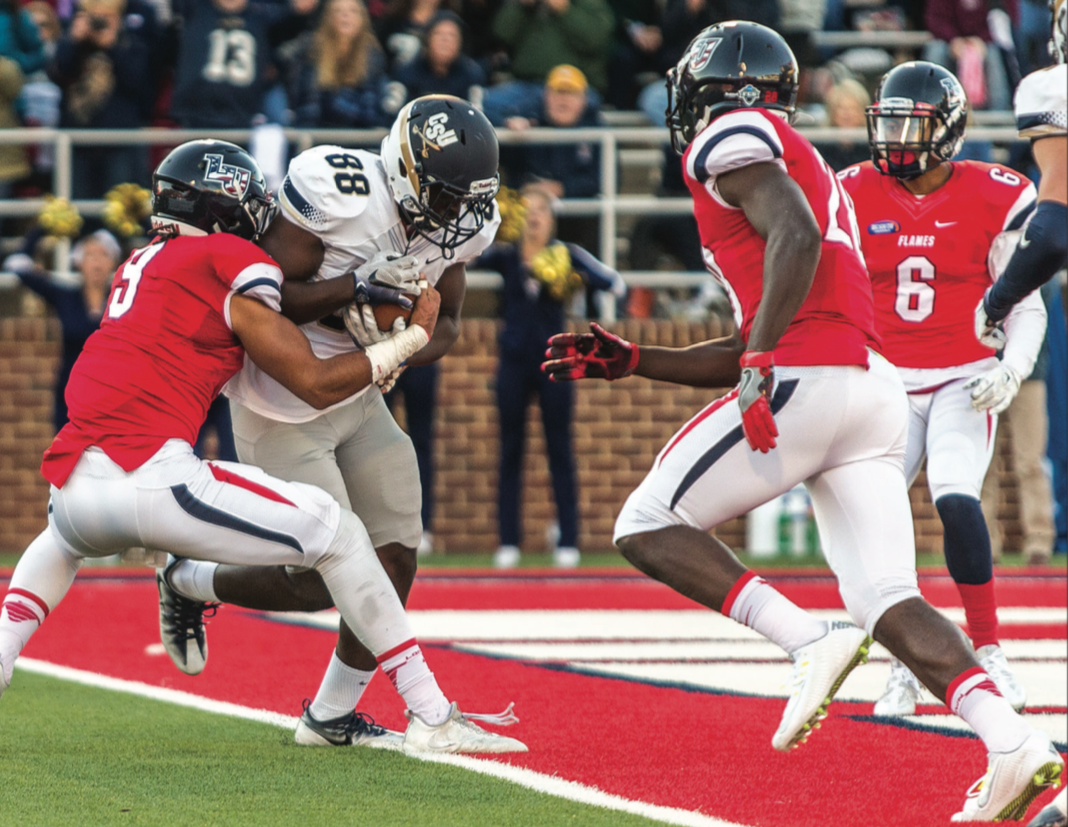 Flames loss puts playoff hopes on hold for a week

The Charleston Southern Buccaneers rolled over the Liberty Flames football team 48-26 Saturday, Nov. 12 at Williams Stadium in front of a senior day crowd of 21,712 fans, virtually putting to rest the Flames hopes of postseason play.

Behind 235 total yards and four touchdowns from the Bucs redshirt freshman quarterback Shane Bucenell, and a total of 514 total yards, the Bucs offense was too much for the Flames defense to handle.

On the offensive side, Liberty freshman quarterback Stephen “Buckshot” Calvert finished with 261 yards passing and three touchdowns despite throwing for just 35 yards in the first half.

The Bucs sacked Calvert five times, and the Flames were never able to get into a rhythm on offense.

“The offensive line did not protect as well as they should have,” Flames Head Coach Turner Gill said. “We just never got anything going to get established for us. That’s tough to overcome. (Charleston Southern) is a good football team.”

Things started well for the Flames in the first quarter as redshirt sophomore cornerback Chris Turner intercepted a pass from Bucenell on the second offensive play of the game and returned it to the
Bucs 14-yard line.

The Bucs forced the Flames to settle for a 32-yard field goal by freshman kicker Alex Probert to take the early 3-0 lead with 12:55 left in the first quarter.

After three-and-outs from both teams, the Bucs offense came alive near the end of the first quarter.

Facing third down from the Flames 11-yard line, Bucenell found redshirt freshman tight end Travay Hatten on a slant pattern across the middle of the field, giving the Bucs the lead and the momentum.

Calvert and the offense took the field again and drove into Bucs territory.

On third-and-long from the Bucs 22, Calvert rolled right outside of the pocket and fired a pass down the field, just over the outstretched hands of open senior tight end Kendall Couamin. 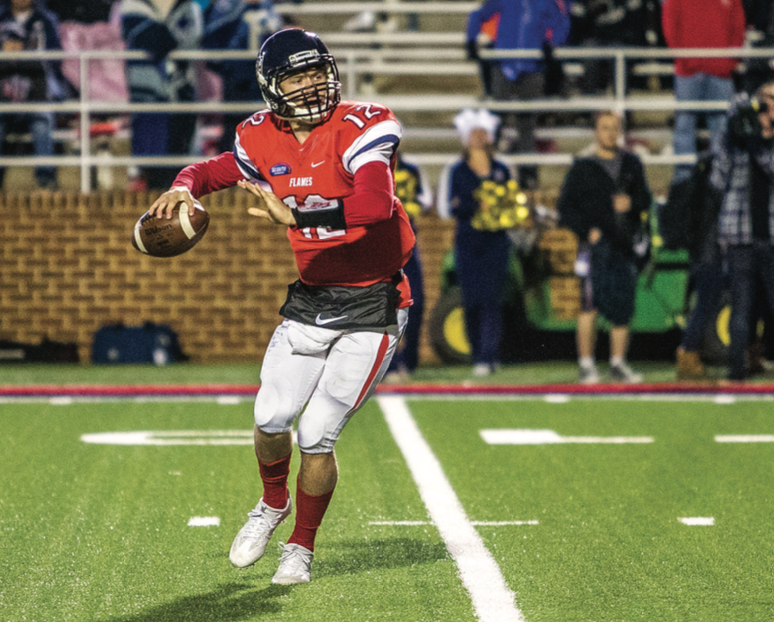 The Flames settled for another Probert field goal, this one from 39 yards out to trim the deficit to 7-6.

The Bucs responded by scoring on their next four offensive possessions, the following drive with a 38-yard field goal of their own from sophomore kicker Tyler Tekac to make the score 10-6 with 14:49 left in the second quarter.

Regardless of different looks shown by Liberty’s defense, Charleston Southern always had an answer.

“Their offense got some things going,” Gill said. “Defensively, we didn’t take care of some things. We gotta play better than that.”

On first-and-10 from the Liberty 28, Bucs senior running back Ben Robinson burst through the offensive line with nothing but open field in front of him to make the score 17-6.

After a Liberty punt, Bucenell drove the Bucs down the field and found senior running back Mike Holloway on a wheel route out of the backfield for a 20-yard score.

The Flames took the field again, trying to slow down the momentum that had swung to Charleston Southern’s side, but Bucs’ sophomore corner Shadarius Hopkins picked off a pass from Calvert at the Liberty 45.

Bucenell and the offense took the field and added to the lead on the very next play with a 45-yard pass to wide receiver Kameron Brown, who snatched the ball over the head of the defending Turner.

The score gave the Bucs a 31-6 halftime lead. 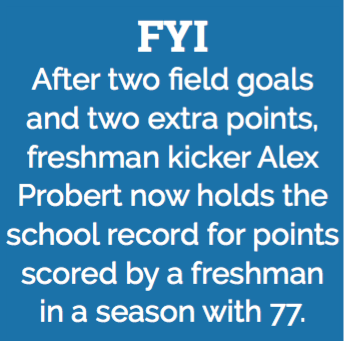 “They had too many explosive plays on us,” Flames senior linebacker Dexter Robbins said. “Because of that, we couldn’t recover.”

Things did not get better for the Flames as the Bucs found the endzone on their first offensive play of the second half.

Bucenell found another hole in the Flames defense and scrambled through it on his way to a 57-yard touchdown run to give his team the 38-6 lead with 13:55 left in the third.

“We gotta make some plays,” Gill said. “We didn’t make plays early in the third quarter to give ourselves more of a chance. Unfortunately, they made more plays than we did, and we were not able to overcome it.”

Calvert connected with Couamin on a deep pass down the left sideline that barely made it past the outstretched hand of a Bucs defender.

Couamin did the rest and took it 65 yards to the endzone. A failed 2-point conversion kept the score at 38-12. His third-quarter touchdown was the first of Couamin’s career.

“It was emotional,” Couamin said. “Just looking back at the summer and working hard with the team, it felt good to celebrate with the team and score.”

The Bucs added to their lead in the fourth quarter with a 1-yard run from Holloway at the goal line and a 28-yard field goal from Tekac to give them 48 points on the night, tied for the most points the Flames defense has surrendered all season.

The Flames added two scoring drives of their own in the final quarter of play.

Calvert found sophomore wide receiver B.J. Farrow on a slant pattern in the end zone for an 8-yard score and Farrow’s third score of the year.

Calvert connected with senior receiver Dante’ Shells on a 48-yard touchdown with 1:30 left in the game to make the final tally 48-26.

A win would have given the Flames an outright Big South title and extended their five-game win streak. Instead, the Bucs had other plans.

For Robbins, a senior and team captain, the loss was a hard pill to swallow.

“Things happen for a reason,” Robbins said. “It sucks we came up short, but we just have to move on. It’s a tough loss. I’ve lost to (Charleston Southern) for three years. You gotta give credit to them. They’re a good football team. It’s a stinging loss.”

Having already clinched a share of the Big South regular season conference title, the only way the Flames can earn bid to the NCAA FCS Playoffs is if the Bucs lose their final game of the regular season next Saturday against the Kennesaw State Owls. 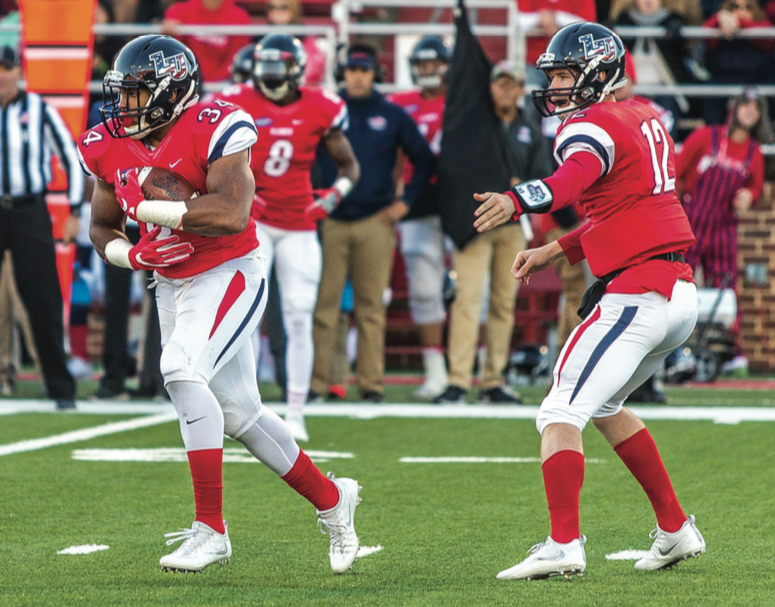 If the Owls prevail, Liberty will receive the Big South’s automatic bid since the Flames knocked off the
Owls 36-21 Oct. 15.

Gill will serve his one-game suspension in this week’s game at Coastal Carolina Thursday, Nov. 17. Gill — along with assistant coach Ron Brown — was suspended earlier this season for a secondary NCAA recruiting violation.

Despite the loss of Gill on the sideline, Robbins said the team is looking forward to the opportunity to defeat the Chanticleers one last time before the move to the Sun Belt Conference at the Division I FBS level.

The Flames kickoff against the Chanticleers at 7 p.m. in Conway, South Carolina.