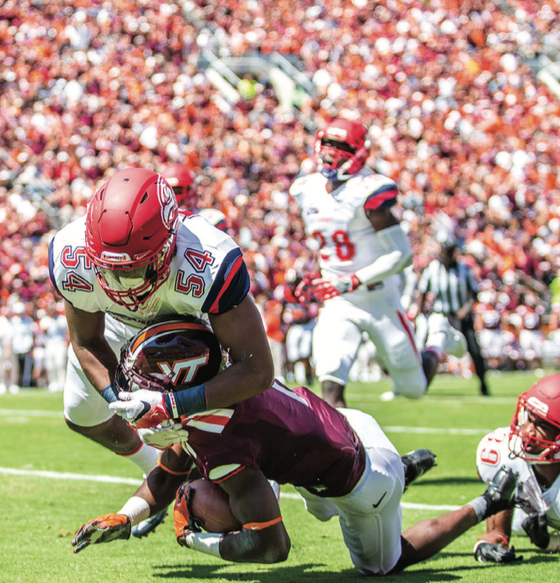 Juwan Wells has raised his game to another level in his first two seasons on the Liberty Flames defensive line.

Wells, a sophomore, was named Big South Defensive player of the week after recording 12 tackles in the Flames’ 41-7 victory over Robert Morris Saturday, Oct. 1.

The Colonials were held to a season low 204 yards of total offensive with only 134 being allowed after their opening scoring drive, according to libertyflames.com

Wells finished the game with seven solo and five assisted tackles, according to libertyflames.com.

Wells’ defensive excellence has filled a void on the Flames defense left by former defensive end, Chima Uzowihe, who donned a Flames uniform from 2012-2015.

Uzowihe is the all-time leader in sacks for Liberty and the Big South. He was named Big South Defensive player of the year in 2015.

Wells and Uzowihe maintain a friendship and relationship even after Uzowihe’s graduation.

Wells says he looks to Uzowihe for guidance throughout the current season.

“I talk to Chima a lot,” Wells said. “I talked to him as recently as last week. He just gives me a lot of advice about what I can do better since he was in the same spot I was in. He gives me good advice like ‘don’t let cheap shots get to you’ and things like that.”

Wells said his current role on the team makes living up to the legacy of Uzowihe a possibility and not just a dream.

“He always joked around last year saying that he wanted me to break all of his records,” Wells said. “Now that I’m able to play more it has become a real goal for me.”

Wells has embraced the larger responsibility of being a team leader this year for Liberty.

“As a leader on the team, I always want to hold myself and my teammates responsible,” Wells said.

Wells said his experience in games at the end of the season last year built up his confidence for this season.

“Getting reps towards the end of last season really helped me this year,” Wells said.

“Last year I realized that I was pretty light against people I was playing against. I knew I had to put on weight, but I wanted to make sure it was the right weight.”

Liberty football is not the only football family for Wells. His uncle, Erik Walden, is an outside linebacker for the Indianapolis Colts.

Wells says that he and Welden trained together this past offseason in Atlanta. Wells said that it was Walden who showed him how to look at game film in great depth and detail.

“He showed me to not only look at the formations, but to look at the personnel and what the players that you will be going against like to do during the game,” Wells said.

Wells said his family loved sports and by playing sports he developed his specific love for football. 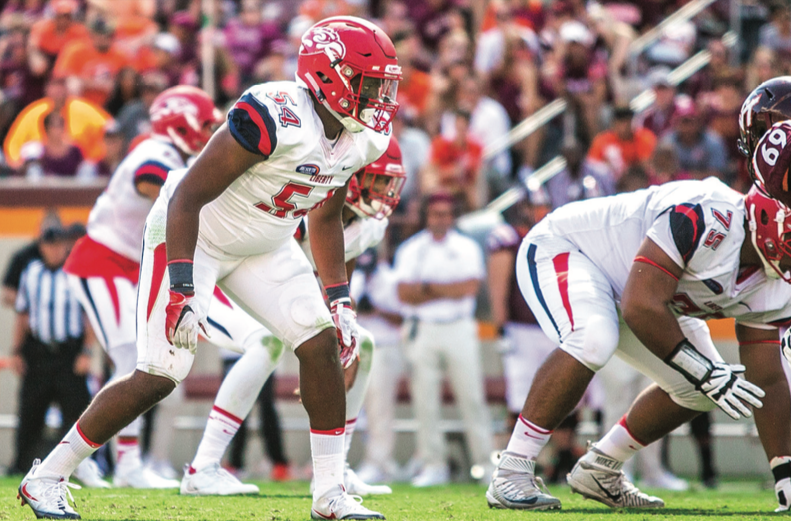 JUWANNA PIECE OF ME — Juwan Wells lined up before the snap at VT. Photo credit:Michela Diddle

“Everyone in my family always played sports all the time,” Wells said.

Wells has aspirations for football both on and off the field.

“The ultimate goal and dream is to play football professionally, but if that doesn’t happen then I would love to coach and pass down what I’ve learned to other players,” Wells said.

Wells and the Flames continue conference play as the travel to Kennesaw State for the first time ever to take on the Owls Oct. 15.